VOD film review: Hannah and Her Sisters | Where to watch online in UK | How to stream legally | When it is available on digital | VODzilla.co 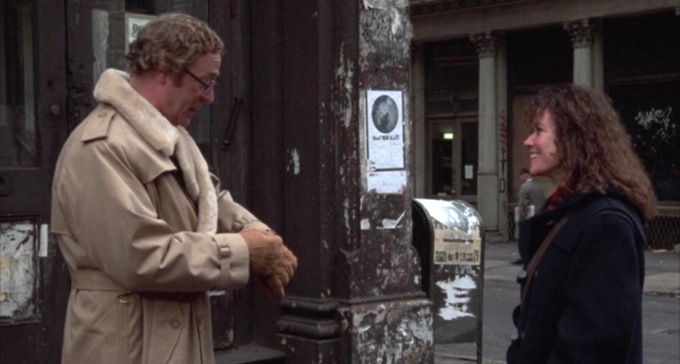 “God, she’s beautiful. She’s got the prettiest eyes. She looks so sexy in that sweater. I just want to be alone with her and hold her and kiss her and tell her how much I love her and take care of her. Stop it, you idiot, she’s your wife’s sister.”

One of Woody Allen’s most mature pieces opens with a camera drifting through a house party, looking at an unsuspecting Barbara Hershey. Finally, it settles on Michael Caine. His voice – even when he tells himself “Easy! You’re a dignified financial advisor!” – is recognisable, but only just, as he stands there in his frumpy jumper and oversized specs. He plays Elliot, a man married to the titular Hannah (Mia Farrow) and also in love with her sister, Lee.

Elliot’s rambling mid-life crisis takes us through this painful and brilliant drama, bringing with it all the confusion and chaos of human relationships. Along the way, we stop off at hotel rooms, bookshops and – in another perfect moment – E.E. Cumming’s poem, somewhere i have never travelled, gladly beyond, which Caine reads in a delicate voiceover. (He won an Oscar for this performance.)

We also meet Hannah’s other sisters, Holly (Dianne Wiest), who wants to be a writer, and aspiring actress April (Carrie Fisher, in her best non-Star Wars role apart from that cameo in Scream 3). Of course, Allen pops up too as a hypochondriac TV producer, formerly married to Farrow, who wins an imaginary battle with a possible brain tumour, only to wind up even more miserable about his meaningless existence.

There’s also a lot of fun to be had with Lee’s partner, grumpily played by Max von Sydow, who hates people. “You missed a very dull TV show on Auschwitz,” he informs Lee, after she returns from a steamy tryst.

The jumps between side-stitching comedy and heart-breaking marriages may give the impression of a haphazard, free-wheeling film, but Allen has never been more in control. Chapter headings and careful cuts, all underscored by a repeating jazz standard, are precisely judged. By the end, he’s covered everything from infidelity and creative writing to depression, the Holocaust and the unpredictable nature of emotion.

In other words, it’s business as usual, but presented in an accomplished, subtle package that never fails to move. All that and a brief appearance by Home Alone’s Daniel Stern as a clueless art buyer? Gary Marshall’s/Richard Curtis’s multi-stranded romances have got nothing on this.

As the looping soundtrack repeatedly suggests, Hannah and Her Sisters will leave you bewitched, bothered and bewildered.