Netflix UK film review: Gerald's Game | Where to watch online in UK | How to stream legally | When it is available on digital | VODzilla.co

How surprisingly ripped Bruce Greenwood is

Despite recently turning 70, Stephen King once again appears to be having a bit of a moment. After The Dark Tower’s failure to ignite much heat, critically and commercially, he is now responsible for one of the biggest horror films of all time with It. Following this, his legendarily philanthropic approach to letting others adapt his material sees Netflix have a crack at what many have called an unfilmable novel: Gerald’s Game. With Mike Flanagan, one of indie horror’s shining lights at the helm, and with an interesting lead pairing of Carla Gugino and Bruce Greenwood, Gerald’s Game is proof positive that King is not all scary clowns and Gunslingers.

Gerald’s Game tells a complex tale of a woman faced with a struggle both physically and psychologically – a story of equal cultural worth as when the novel was initially published, a depressing fact in itself. She must confront inner demons, real physical threats and, just maybe, a hint of the supernatural.

There are a lot of plates spinning in this film and it is to Flanagan’s immense credit that he is able to marshal it all together – at least, most of the time. Featuring flashbacks, unreliable narrators and characters playing off each other within the mind of one woman, Flanagan (along with co-writer Jeff Howard) builds layers upon layers. Starting the film almost as if it were a one-room play before introducing other characters and locales, they weave extreme trauma of the past with the present to explore, and ultimately celebrate, the determination to extricate oneself out of a dire situation and hopefully survive.

Carla Gugino is quite frankly perfect casting here. Playing out a role inside her head, as well as being handcuffed to a bed, is asking a lot of an actor, but she takes it head-on and presents a showcase for a performer who gets much less time in the limelight than she deserves. Bruce Greenwood also feels spot-on, an actor who feels just as comfortable on-screen being menacing as well as welcoming – his role feels like a devil on a shoulder for the most part, but there’s a smoothness to him, which makes his calls to give up feel almost convincing. Henry Thomas is less successful in a crucial flashback role – he is a little one-note, which the material practically demands of him – but a key scene doesn’t quite have the impact it may have had with a different actor.

There is an aspect of Gerald’s Game that doesn’t entirely work – the events in the final act don’t quite stick the landing, with some handholding that just isn’t as delicately done as the rest of the film. It is a small complaint given the relative quality of the overall work, but it’s one that maybe diminishes its stature slightly. Otherwise, Gerald’s Game is an intense, upsetting and, in the end, strangely uplifting piece of work, which grips like a vice early on and only lets go much later. It’s a fine showcase for Flanagan and Gugino and, after It, is another strong King adaptation.

Gerald’s Game is available on Netflix UK, as part of an £9.99 monthly subscription. 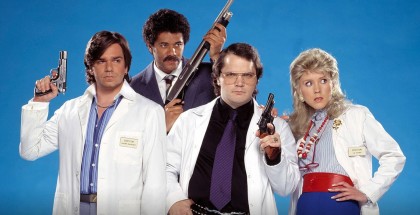