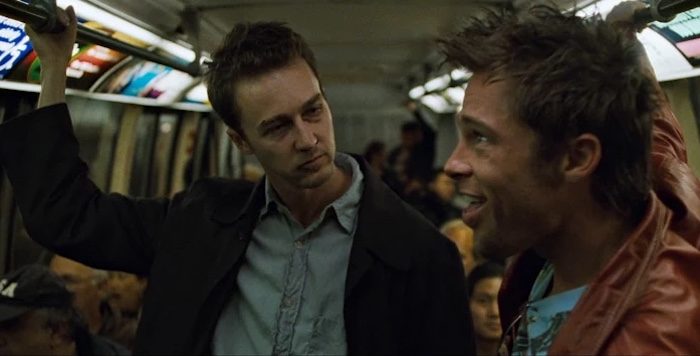 True story. When I was travelling in Thailand early in 2000, I went to eat with a bunch of guys before we headed for the beach. Every restaurant shows bootlegged movies, and the one our group chose was playing Fight Club, which they’d not seen and assumed to be a Chuck Norris-style actioner. I’d seen the film already, and had great fun watching their confused faces as the film worked through “bitch tits”, support group, talking penguins and live-action Ikea catalogues before it even got to the fighting. And then, of course, the film gets really weird.

At first glance, Fight Club is something of a misnomer, but in retrospect, it’s incredibly apt. The Club was the youth of the 90s, the Fight against their elders. David Fincher has always said that his film was a new version of The Graduate, something apparent in Edward Norton’s Dustin Hoffman-esque performance but chiefly in the battle lines that were drawn between old-school critics, who denounced Fincher as a fascist, and rising commentators (especially on the web) who identified with the film’s counter-cultural, anti-consumerist satire. Fight Club had the good fortune to be released just as protest movements such as the Seattle WTO protests were becoming popular, and it became a defining film for bloggers, even before ‘blog’ had caught on as a buzzword.

As a film, it’s certainly different. Fincher was at the vanguard of the MTV generation who cut their teeth on music promos, but – aside from their evocative, filtered lighting – his earlier films had a classical, linear brio to them. Even Se7en, with its rug-pull third act, has a story that can be followed. Fight Club is different: the first rule is that you don’t talk about cinematic grammar. Somewhere between Pulp Fiction and Annie Hall, Fincher throws in fourth-wall breaking straight-to-camera address, subliminal inserts, CGI, a near constant babble of narration and a house-of-cards opening sequence that keeps changing our entry point into the story.

Is this a director who can’t settle on a coherent aesthetic, or an auteur deliberately trying to confuse you? Gloriously, it’s both: the confusion is borne from cinema’s most unreliable narrator, a guy who doesn’t even realise he’s deluding himself. In retrospect, the big twist is signposted continually in Fincher’s framing and in the dialogue (“I already knew the answer before he told me”), but it is worked out with savage logic.

And with that fracture comes a cruel, sardonic assault on the superficiality of the 90s. Just as Se7en turned the salacious meanness of the serial killer on its head, so Fight Club uses the tools of attention-deficit cinema as a means of berating the audience. The unspoken question is this: is the joke really on the consumer slaves with their designer clothes and expensive cars, or the cooler-than-thou hipsters whose non-conformist credentials are themselves a kind of conformity?

As played by Brad Pitt, Tyler Durden dresses and acts like a dude – even his gym-built body is the ideal of a metrosexual, rather than the musclebound hunks of 1980s action cinema. But he’s the product of a psychotic mind hell-bent on destruction. What does that say about the geeks who have spent the decade-and-a-half since using him as a style bible?

Fincher’s timing was bang-on, creating an instant classic with enough foresight to remain relevant. And yet, it is still a product of its time. Were it to be made now it would look very different. The film’s climactic levelling of a city’s skyscrapers, complete with reference to ‘ground zero’, is alarmingly prescient. Yet this is less about 9/11 than the Oklahoma City bombing, and this is the last gasp of a strain of 90s cinema that emerged in the wake of that attack. (See also: Arlington Road.) For all that the themes resonate today, the iconography has a distinct vibe of pre-millennial tension that suits its October 1999 release date to a tee.

I must admit: it’s a little too cold and aloof for me – but then, I never liked The Graduate either. Using post-modernism to define post-modern culture was always going to let some sceptics slip through the net, so it’s never been a generation-defining statement, even though I’m part of the generation being defined. Blasphemy? Maybe, but Fight Club was all about putting sacred cows to the sword, so there’s a delightful irony now that the film has become a sacred cow itself.

The film is overwritten to the point of distraction. For all the visual innovations, there’s a sense that Fincher’s pictures don’t really add anything to Chuck Palahniuk’s first-person prose. Unlike, say, Badlands, where voiceover and imagery are in ironic counterpoint, here everything’s ironic, as the director embellishes the Narrator’s half-truths long enough for us not to see the sleight of hand. Were the narrative twist not so outrageous, nor Fincher’s showboating so bravura, it’s likely more people would notice that the heart of the story borders on the banal. Complaining about flat pack furniture? It’s the very definition of what would now be hashtagged as #firstworldproblems.

Fight Club is available to watch online on Amazon Prime Video as part of a £5.99 monthly subscription.

Where can I buy or rent Fight Club online in the UK?

VOD film review: Sick of It All

Why you should be watching The Expanse on Amazon Prime Video... November 20, 2016 | Ian Winterton