Netflix UK film review: The Cabin in the Woods | VODzilla.co | Where to watch online in UK

Netflix UK film review: The Cabin in the Woods

"I had to dismember this guy with a trowel. What’ve you been up to?"

So a jock, his dumb blonde girlfriend, a nerd, a stoner and a virgin walk into this cabin, right?

Shockingly, it does not go as planned. Meanwhile, Richard Jenkins and Bradley Whitford are going about their daily officey business; poking fun at colleagues, sneering at their foreign opposite numbers and joining in with the office betting pool. They even tuck their shirts in.

Then all hell breaks loose. Literally. Seemingly created to revitalise the slasher film genre, The Cabin in the Woods throws everything at these five stereotypical kids in a horror movie – including, but not limited to, face-eating ballerinas and a unicorn.

Although the premise seems exciting, post-modern and foolproof, it does require 20 minutes of unoriginal kids-in-a-horror movie set-up, in which they drink, smoke pot, play truth or dare and passionately kiss taxidermied wolves. This, despite being necessary, is still tedious.

Whedon and Goddard do have fun, though. Quirkily timed and always sharp, the film’s sense of humour arises from the juxtaposition of weary office drones with the stoned guy (Franz Kranz). Goddard impressively balances the two worlds to the point where you’re fully enveloped in both; the Evil Dead-like cabin and the Tron-like office complex.

Certain moments become almost poetic out of context. A creepy gas station Bible basher – you know the one, he’s about 15 minutes into your favourite horror film and goes “You’re staying at [insert ominous place name]? Don’t do that…” – ends up on speakerphone. Two twenty-somethings, faced with a genuinely chilling dilemma, light up a joint and start with “So, how’re you?” It’s these moments that make Cabin In The Woods unique, as an ever-growing series of Bad Things cannot.

The praise for the writing, however, stops there. Whedon and Goddard appear to pick and choose the elements they wish to satire and those they actually need to progress their story. The plot clichés are often forgivable thanks to the mostly impressive CGI and comedy, but the generic characters are harder to ignore. The Cabin-goers are given little wiggle room for any of their performances to make a difference and although, especially with Jenkins and Whitford, the snappy lines and absurd context give them a grisly severed leg to stand on, the cast don’t matter as much as they should for the horror to hold any weight. A few unanswered questions surrounding the plot (why is there a one-way mirror?) leave a slapdash feel that’s difficult to shake with a premise so rooted in rules and precision.

The films ends in definitively squint-worthy and ridiculous fashion. Is the fear factor here that horror films aren’t real or that they could happen right now? It seems as though Whedon and Goddard had a good idea and an estimated $30 million and produced a simultaneously frustrating and entertaining blitz of horror, punctuated with quips of striking excellence.

The Cabin in the Woods is available on Netflix UK, as part of an £8.99 monthly subscription.

Where can I buy or rent The Cabin in the Woods online in the UK? 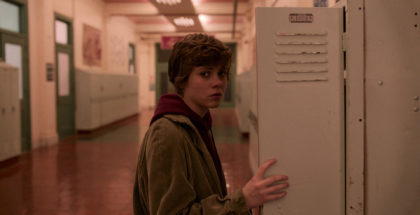