First look UK TV review: The Out-Laws (Clan) | Where to watch online in UK | How to stream legally | When it is available on digital | VODzilla.co 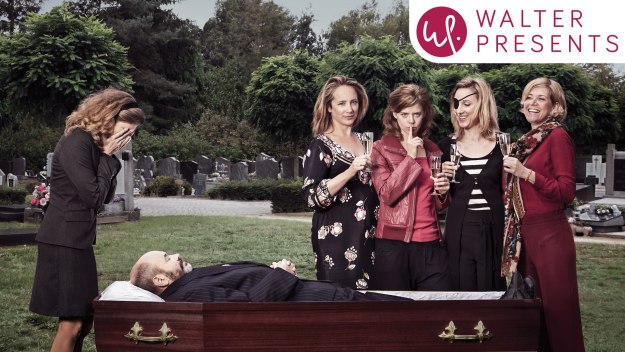 Read our interview with The Out-Laws creator, Malin-Sarah Gozin

“Oh, I could kill him!” It’s one of the easiest things to say in the heat of the moment, but while murders happen all the time in TV-land, The Out-Laws (Walter Presents’ new Belgian series on More4) shows us just how hard homicide really is. Sounds dark? You’ve not heard the half of it.

Created by Malin-Sarah Gozin, the 2012 comedy (formerly titled Clan in its original country) is a wonderfully wicked affair, as we meet the Goethals sisters in the small town of Vredegem. The five of them are close, but there’s one thing threatening to push them apart: Jean-Claude Delcorps, the husband of Goedele. The problem? He’s so despicably horrible that the other four decide that the only thing to do is murder him.

It’s the kind of thing that belongs in an old Ealing Comedy and Malin-Sarah Gozin’s script channels that vibe with a twisted sense of fun – gallows humour is the order of the day, even as we watch the proverbial gallows being assembled. Gozin has a superb ear for balancing the silly and the sinister; Jean-Claude is swiftly nicknamed “The Prick” by the sisters, a pun on his name that sounds enjoyably rude in Flemish (it’s a treat to hear an unfamiliar language on our TV screens), while laugh-out-loud insults such as “turtle’s fart” are waiting to spring out at you during the most inappropriate occasions. Throughout, Birgit Goethals (Ruth Becquart), or “Bibi”, wears an eyepatch (the mark of a crossbow incident), which gives everything the air of a graphic novel – heightened to the point of absurdity, but never pushed into unbelievable territory. (Any show featuring a woman wearing an eyepatch is always worth watching.)

An early flashback shows the group of girls making a blood pact when they were kids – and that close bond between them is immediately convincing, thanks to the ensemble’s chemistry. There’s Eva (Barbara Sarafian), who is pushing through life’s disappointments with her career. There’s Veerle (Kristine Van Pellicom), a wife with a son who’s having an affair. There’s Bekka (Maaike Neuville), the youngest, starting up her own masseuse business. And there’s Goedele (the admirably calm Inge Paulussen), who meekly tolerates her prick of a partner.

If they’re good at joking and supporting each other, they’re even better at plotting, as a cabin in the woods becomes the target of the first attempt on Jean-Claude’s life – but despite the meticulous plan, things go inevitably awry. That slide from criminal conspiracy to chaos is amusing in itself, but what makes The Out-Laws so entertaining is the fact that, deep down, you’re just as frustrated as they are: you really do agree that Jean-Clause deserves to get it.

That’s partly thanks to Dirk Roofthooft, who is gloriously horrible as the spouse from hell. He insults his sisters-in-law during a painfully inspired dinner party, commenting to someone that Bekka’s brains are in her bottom, but loudly enough for the whole room to hear it, then joking about Eva’s inability to have children. He’s just as bad at Christmas presents, boldly buying his wife a vegetable steamer and brandishing the price tag in front of everyone – before leaving her to clean up the plates later that night. Even on his own, he’s despicable, playing prank calls on other people to play on their problems and fears, just for the fun of it. Roofthooft is visibly enjoying himself, serving up an immediately annoying laugh with a side order of endlessly unattractive glares and sneers.

The show keeps flashing back to more and more of his awful deeds, each one stacking up in the column that favours his swift passing. But the series’ trump card is that we start the whole story with The Prick’s funeral – an occasion that brings with it insurance agents Thomas (Robbie Cleiren) and Matthias Dewitt (Geert Van Rampelberg), whose firm is about to go under, unless the brothers can stop the Delcorps life insurance claim from being paid out. And so they wade into the aftermath of Jean-Claude’s death and start investigating, hoping to prove it was foul play.

The fact that they’re not your typical police detectives works enormously in the programme’s favour – Van Rampelberg’s Mathias wastes no time in hooking up with the charmingly enthusiastic Bekka (or, to use her masseuse name, “Bekkalicious”), while both of them are almost as insensitive as Jean-Claude himself. As we prepare to watch more designs for his demise, we learn more motives for the sisters to get away with it – but no matter how much we cheer them on, there are the lingering enemies of fate and luck to contend with. We want them to succeed, but deep down, there’s a niggling suspicion that maybe, just maybe, they didn’t kill him at all. In which case, who, or what, did?

It’s a tantalising, refreshingly offbeat mystery, laced with the kind of wit that made the early seasons of Desperate Housewives such compelling viewing. With only 10 episodes in total, though, and a US remake on the cards, there’s no risk of The Out-Laws running out of steam. The result is distinctive, devilish and delightful.