First look UK TV review: The Man in the High Castle Season 4 | Where to watch online in UK | How to stream legally | When it is available on digital | VODzilla.co

The Man in the High Castle Season 4 review: The stage is set for a thrilling finale

Warning: This contains spoilers for The Man in the High Castle Season 1 to 3. Not seen it? Catch up with our reviews here.

When The Man in the High Castle first arrived on our screens back in 2015, the show dazzled with its chillingly plausible world-building and challenged with its morally complex characters. From its introductory shot of Times Square decked out with a Nazi flag, it had fans immediately hooked. Four years on and Amazon is readying to bid farewell to what was once its flagship piece of expensive, adult TV, and the fourth and final season is as complicated, haunting, thrilling and timely as those riveting opening moments.

It’s not been an entirely smooth journey, with Season 3 taking a slight dip in its middle, as the programme – based on Philip K. Dick’s alt-history novel – kept expanding and expanding, feeling like it was mostly building up to the next chapter. Now that chapter is here, though, The Man in the High Castle is undoubtedly back at its peak, with just the right number of characters, an astutely judged pace and a renewed sense of stakes.

That, wonderfully, is because the series repeatedly manages to balance its widening universe with a narrowing focus on its richly drawn characters. Season 4 picks up as the Nazis continue their push into other worlds through the portal that they finally managed to get operational at the close of Season 3. What they find, as we already know exists, is a plethora of alternate realities, including at least one in which they lost World War II, and they set about harvesting each plane for knowledge and information, whether that’s technological advances or the reasons why they were beaten in global combat.

Juliana, at the end of Season 3, made the leap to our reality, and Season 4 takes us along with her – only for her to be run over by John Smith. Not the John Smith who’s the Reichsmarschall in the main world, but a travelling salesman (awarded salesman of the year in the tristate area). Alexa Davalos is wonderful as the ever-resourceful Crane, who isn’t sure how different John Smith 2 can be – a new way in which the show can explore the banality of evil, the thin separating line between the humans on both sides of the war, and the question of circumstance and sympathy. And, underneath it all, the question lingers: has John Smith 2 already slipped through and somehow taken this other John’s place? Does he know who Juliana is? (The logic says no – one can only jump through to another universe if they do not exist in it – but it’s testament to Davalos’ performance and the way the show captures her perspective that her paranoia is enough to make us uneasy.)

Rufus Sewell continues to deliver the performance of his career, and the chance to see him interpret John in two different ways is precisely the kind of showcase his talent deserves. Over the four seasons, his character has become the heart of what makes The Man in the High Castle such a compelling and challenging watch, as Sewell brings out the contradictions, complexities and conflicts of a man who wants to protect his family above all else but also has orders to follow, a position and an appearance to maintain, all of which he does under what increasingly appears to be pressure and fear rather than passion or belief.

Seeing him in a normal world – where his son hasn’t been killed by an appalling party policy on those with injuries, disabilities or medical conditions – is heartbreaking, because we also see John Smith 1 still struggling with what happened to Thomas. His wife, Helen (Chelah Horsdal), has left him in this version of events, taking their two daughters with her. With John determined to bring them back into the fold of the Reich, we then get a two-fold glimpse of what it’s like for members of the Smith family to be raised outside of the Nazi ideology – John in the other universe and Jennifer and Amy in this one. Jennifer discovers music from outside of the Reich, something that shocks Amy when she catches her dancing with a classmate, and John has to explain to Jennifer that the rules are different under the German regime. It’s a heart-wrenchingly impossible line to tread, as Smith 1 tries to keep her in-line and obedient, but not so much that she could end up like Thomas. (Amy, on the other hand, poignantly reads Alice in Wonderland with her dad.)

Joel de la Fuente also increasingly shines as the ruthless Inspector Kids, who is trying to quash the rebellion on Imperial Japan soil. Like Smith, he’s a fascinating figure to watch, as glimpses of a conscience glimmer under the stern surface – he now has a son to consider, and whether his offspring will follow in his footsteps or not. It’s a shame that Kido’s counterpart, Tagomi (Cary-Hiroyuki Tagawa), doesn’t feature much, but that’s part and parcel of High Castle’s distilling its focus into the essentials needed for maximum impact. Indeed, Season 3 saw us bid farewell to Joe and Frank, both given a strong send-off to make way for the leaner Wyatt Price (Jason O’Mara), an all-American rogue who doesn’t hesitate to drive events along.

Wyatt helps to bring together the resistance, with a band of Irish fighters teaming up with this America’s black community – which, after several seasons of little attention, finally gets a decent share of screentime. The Black Communist Rebellion is perceived as a major threat by the Japanese, but those threats and tensions are reflected on all sides, and after Season 2’s Cold War thrills, the question is less about whether a war will take place and more about what each person will be fighting for.

The always-excellent David Harewood gives us a stirring answer, as his resistance leader Equiano Hampton chairs an emotional meeting that sees men and women speak aloud the names of their loved ones lost after being taken to camps. The consideration of what kind of world we leave for our children – how to protect them, encourage them and guide them in what we think is right – has never been so beautifully by this show. If its study of propaganda and power by media has made High Castle a timely watch in our modern, online age of fake news and echo chambers, this renewed emphasis on generational differences and obligations only makes it more timely to our current world of climate change denial and nationalist, populist and separatist movements.

And yet, for all those big questions, it’s immediately apparent that High Castle’s final run won’t be an Avengers: Endgame-style affair where multiple universes invade each other. Rather, the scale is intimate and personal; the opening episodes of Season 4 all elegantly builds towards a convergence not at the Nazi’s world-hopping portal but at a party organised by Robert Childan (Brennan Brown).

Brown remains impeccable as the pedlar of old Americana souvenirs, concerned with his own self-preservation as much as preserving the history of a forgotten nation – a role that makes him the perfect funnel for the resounding themes of memory, history and the future. As he gets the chance to meet Japanese royalty, it’s telling that his deference isn’t just an act; he’s genuinely won over by their culture and politeness. It’s testament to High Castle’s writing that it still finds time to explore his many peculiarities and torn affections, without losing the momentum taking us towards an inevitably reckoning. Who will win out in the battle for hearts and minds? And, more crucially, who will change sides to decide what happens in the decades to come? With Smith 1 tempted by the notion of retrieving his son – or going to live with his son – in our parallel universe, will family or party loyalty be the side that triumphs? Judging by its initial chapters, Season 4 of The Man in the High Castle promises a final run that will satisfy on the big and small stage alike. What a treat it is to have the show end things on its own terms.

Seasons 1 to 4 of The Man in the High castle are now available exclusively on Amazon Prime Video, as part of a £5.99 monthly subscription – or, if you also want free next-day delivery and access to Spotify rival Prime Music, a full £79 annual Amazon Prime membership. 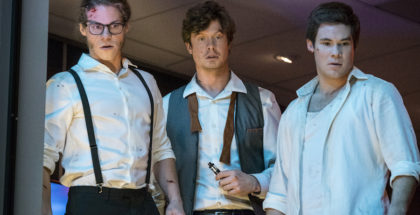