First look UK TV review: Lee and Dean | Where to watch online in UK | How to stream legally | When it is available on digital | VODzilla.co

Why you should be watching Channel 4’s Lee and Dean 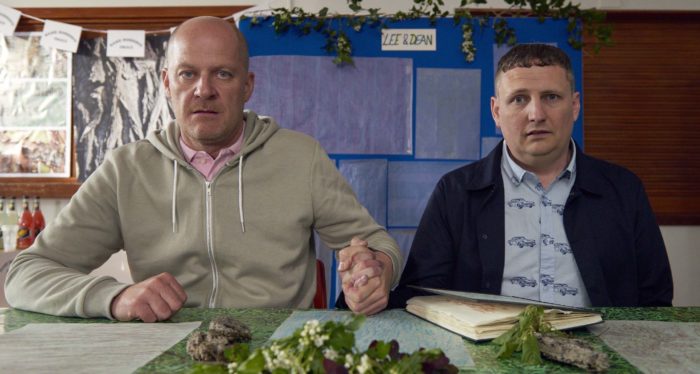 Lee and Dean Season 2 premieres on Channel 4 at 10pm on Thursday 11th April 2019. Never seen it? Why you should catch up:

Between BBC Three’s People Just Do Nothing and This Country, the mockumentary is enjoying something of a resurgence on British TV. The latest to join the trend are Lee and Dean, two builders who spend their days driving around Stevenage in their white van. A pair of white van men might not sound like the most auspicious of starts, but Channel 4’s comedy wears its working class bricks on its sleeve, and uses them to build something with real promise.

Much like This Country, Lee and Dean benefits from the fact that it’s written by its cast, and you can tell that Miles Chapman (Lee) and Mark O’Sullivan (Dean) know their characters inside and out (they first graced our screens in a short on YouTube back in 2015). Lee is a blokey bloke, who spends his time laying pipe and filling cracks, to use his parlance, and Dean, well, Dean has strong feelings for his best mate.

Childhood friends, Dean follows Lee’s lead, happy to be the number two in their relationship – and so when Lee finds himself a new girlfriend, Nikki (Camille Ucan), much to the displeasure of his client-with-benefits Mrs. Bryce-D’Souza (Anna Morris), Dean gamely steps up to pretend to be Bryce’s squeeze, allowing Lee and his mistress to spend time together. But, of course, things are destined to go wrong, and the result is some of the most entertainingly awkward comedy this side of Peep Show, particularly when the finale lands everyone inside the same naff nightclub.

While the show revels in its characters’ brash, crude comments, there’s a deceptively soft side lingering beneath the brittle brickwork. That’s what makes the thing work, even as some of the vox pop segments occasionally feel a little disjointed – a stronger sense of presence and purpose to our mockumentary camera crew might give the series a more distinct identity. Nonetheless, there are slivers of emotional sincerity among the giggles: Lee, we realise, might have found a relationship he actually wants to take seriously, while Dean brings a melancholic loneliness to every exchange. “You know what’s coming up?” he asks Lee, with an excited expression. “Me and Nikki going to Thorpe Park?” comes the dismissive reply. Lee pauses. “No, your birthday.”

With the whole box set now available on All 4, we highly recommend it.

Lee and Dean Season 1 is available on All 4, with Season 2 available from Thursday 11th April at 10pm.

Where can I buy or rent Lee and Dean online in the UK?

The Americans Season 6 to air on UK TV this April