Netflix UK TV review: Ash vs Evil Dead Season 2 | Where to watch online in UK | How to stream legally | When it is available on digital | VODzilla.co 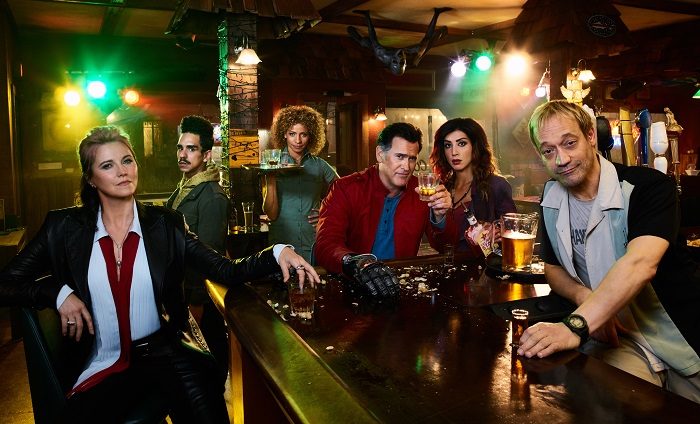 STARZ's stupidly smart bloodbath is as inventively gory as ever.

A TV spin-off from Evil Dead? You’d be forgiven for thinking that Ash vs Evil Dead wouldn’t work, but Season 1 of STARZ’s TV series was one of the best – and bloodiest – surprises of 2015. It didn’t just work. It got to work with a chainsaw and shotgun.

Season 2 finds us right back in the same territory and not a lot has changed. That might sound ridiculous, after the world-ending shenanigans that went down in the first 10 episodes, but that’s part of the show’s brilliance. As much comedy as horror, Ash vs Evil Dead may just be one of the smartest sitcoms around – and like a classic sitcom, it knows that things still have to reset to the way they were, even when “things” involve flesh-eating demons and snakes being vomited out of people’s mouths.

All that nastiness became part of the show’s character development in Season 1, which used the gut-spilling to give each character a chance to be possessed and take centre stage. So by the time we catch up with Ash (Bruce Campbell), Pablo (Ray Santiago) and Kelly (Dana DeLorenzo), we’re more than on their side of the fence – even if they have done a deal with the closest thing the show has to a devil just so they can have beer-swigging parties in Jacksonville, Florida.

But, needless to say, that deal goes sour, as we begin with Lucy Lawless’ Ruby, who discovers that her children birthed out of Pablo’s gob during Season 1’s finale have grown up fast. And they’ve got brains and evil plans to boot – in other words, they take after their mother. Assuming, of course, that you consider Pablo the father (a matter that, inevitably, comes under hilarious discussion). And so Ruby summons El Jefe to help out.

The result is exactly what you’d expect after the show’s first season: blood is splattered, innards become outards and heads go flying. But the show’s spooky silliness only gets more creative – a testament to just how warped the writers’ imaginations are. Everything is bumped up a notch, from the return of the Book of the Dead’s face-hugging cover to a scene that sees us get far too intimate with the nether-regions of a corpse. It’s potty-mouthed, messy, toilet humour – and it’s glorious.

There’s always wit behind the slapstick, though, which continues to impress – even Ash’s now-signature move of jumping through the air to attach his chainsaw to his wrist becomes the butt of a joke. But the best thing is the cast’s chemistry, which sparks like the starter cable on any reliable, gas-powered mechanical arm. Santiago and DeLorenzo juggle their bad-ass and blustering presences with an easy-to-underrate skill, Lawless manages to be more human and likeable than before without losing her intimidating streak, while the introduction of Ash’s father, Brock, is brilliant.

“You think Ruby’s here, in a crack house?” asks Kelly. “This is my house,” retorts Ash. And his dad more than lives up to that impression – veteran Lee Majors spouts the same sexist nonsense as his son with the same idiotic swagger and an instantly amusing smile.

Campbell, though, is the one holding it all together, capable of swinging from stupid to intelligent to stupid again with a knowing wink to the camera. He continues to spout one-liners at a scarily fast pace. “I’m getting that bad memory disease,” he sighs at one point. “Alzheimer’s?” asks Pablo. “Alzheimer’s?” replies Campbell, without missing a beat. “That’s a bad memory disease. Why would you mention that?”

Ash vs Evil Dead is clever enough to keep its formula unchanged, so that if you did happen to forget all of Season 1, the series still makes sense. There’s Ash. There’s the Evil Dead. That’s it. Even after 10 episodes, though, the novelty of this daft bloodbath hasn’t worn off.

Ash vs Evil Dead Season 2 is available on-demand through Virgin Media in the UK. The show can be watched on-demand by Virgin Mix TV, Fun TV and Full House TV customers. Season 1 is available on Netflix UK.

Ash vs Evil Dead: Season 1 and 2 is available to stream on-demand on Virgin Media. It is also available on Netflix UK, as part of an £9.99 monthly subscription.

Where can I buy or rent Ash vs. Evil Dead online in the UK?