The line between comic book movie and superhero movie is one that can be easily lost in the blockbusting blur. The Umbrella Academy, Netflix’s new TV series based on the books by Gerard Way and Gabriel Ba, is definitely the former. It features people with special powers, but they’re far from super – and heroes? Well, they’re not exactly that, either.

The Umbrella Academy was the name given to a group of kids who were all unexpectedly conceived and inexplicably born instantaneously at the same time around the world. Billionaire Sir Reginald Hargreaves (Colm Feore) decided they were important and swooped to raise seven of them, training them to use their abilities to be a crime-fighting unit. We pick things up after his death, as these step-siblings reunite after many years apart – some more years than others.
There’s Luther (Tom Hopper), a guy with the kind of over-sized upper-body that makes The Rock look like The Pebble; Alison (Emmy Raver-Lampman), an actress with an ability to warp reality through lies that puts Wikipedia to shame; Diego (David Castañeda), a troublemaker with a knack for throwing knives; Klaus (Robert Sheehan), a clairvoyant who spends most of his time talking to drug dealers; and Number Five (Aidan Gallagher), who went missing when they were kids.

He returns to them out of the blue, with a warning that the world is about to end, and he brings with him two assassins – Mindhunter’s always-entertaining Cameron Britton and Mary J. Blige, of Mary J. Blige fame – whose motivations aren’t clear, but are certainly violent. But our window into this madness is Vanya (Ellen Page), the only member of the family who doesn’t have any powers at all – except for being very good at the violin. The result is a dysfunctional tapestry of conflicting relatives, as insults and retorts escalate into punch-ups, and Vanya, the awkward one left out, stands aside and watches things get demolished, exploded and shot to pieces. All the while, they’re watched over by Reginald’s eerie Stepford-esque wife (Jordan Claire Robbins), who may or may not have a sinister programme running beneath her smiling surface.

With its grief, arguments, humour and action, this is a story that’s somewhere between Watchmen and Kick-Ass, between X-Men and The Squid and the Whale. And that patchwork vibe is the overriding tone for the show, which has the tendency to feel like a bunch of other things stitched together. But if you suspect there might not be much substance to this quirky quilt, the individual parts do begin to add up to something fun.

That’s partly thanks to the cast. Page is a fantastic screen presence, even if she’s not given much to do in the opening episodes – it’s only as we’re introduced to a potential love interest that her character begins to spark to life – and it’s a treat to see Tom Hopper getting a prominent role. Gallagher’s Number Five, though, emerges as the stand-out, bringing a real sense of pathos and lost time to his childlike prophet, not to mention a wry sarcasm born out of his ominous experience.

The ensemble sell this bizarre premise with a convincing anti-chemistry, even as the show has a tendency to hop around the ensemble with a short attention span, never quite giving us a central emotional hook to hold on to. If Umbrella is missing that user-friendly handle, though, it more than makes up for it with a deluge of style. And that downpour is the show’s other key to success.

The series is aggressively pop culture-savvy, never letting a good story get in the way of a chance to play a hit song over a set piece. That constant barrage of cool could become tiresome in another programme’s hands – the assassins, of course, wear animal head masks, because reasons – but The Umbrella Academy keeps things frenetic enough to get away with it. An early sequence that sees them all dancing separately around the gorgeously designed house to Tiffany’s I Think We’re Alone Now gets to the heart of that balance of silly and serious, of surface and slightly less superficial surface.

Meanwhile, flashbacks to Colm Feore’s dubious patriarch – his training rituals are more Kingsman than Harry Potter – and flash-forwards to the doom on the family’s doorstep give events a framework that has enough intriguing potential to keep you watching. And while you never lose the sense that this is a show striving very hard to be original, The Umbrella Academy revels in its knowingly uneven identity. Subtle, it might not be, but it’s certainly never boring. It’s the kind of show that wears its unhappiness on its sleeve, but draws it on with a bright felt tip pen. It’s a comic book tale, not a superhero one, and that’s graphic and novel enough for now.

The Umbrella Academy is available on Netflix UK, as part of an £8.99 monthly subscription. 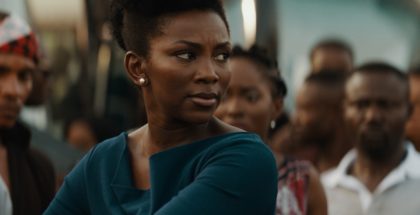