GNew. Richard Osman and Sara Pascoe reveal themselves to be either gifted gamers or sore losers as Dara O Briain’s hit show returns. The pair dual on Galaga and Micro Machines.

One of the surprise successes of last year, Dara O’Briain’s Go 8 Bit returns for a second season – and the relative novelty of using retro arcade games as the basis of a game show still makes for enjoyably fresh viewing. After one season, you might think that the format would tire quickly, especially in an age of Let’s Play videos and online multiplayer, but Dave’s original show channels the fun of old-school competitions held in your living room, the likes of which is now only really espoused by Nintendo. The omnipresent Richard Osman makes for a fine addition to the roster of celebrity guests, while Sara Pascoe is entertainingly aggressive about the whole thing. As ever, the charming vibe (reinforced by nerdy team captains Steve McNeil and Sam Pamphilo) stems from the fact that nobody’s there to mock or belittle the idea of gaming. The good-natured Dara is a perfect choice of host, presenting in a similar vein to Robot Wars, but the series’ MVP emerges as games journo Ellie Gibson, who continues to be hysterical in her role of providing trivia and guidance – a role that she even briefly swaps with Osman to prove her credentials on the Go 8 Bit couch. It’s no surprise that she’s been given her own news and reviews show, Go 8 Bit: DLC, that is broadcast after the main programme. With the first episode of Season 2 already available to watch early on UKTV Play, video game fans should turn off YouTube and boot this up immediately. 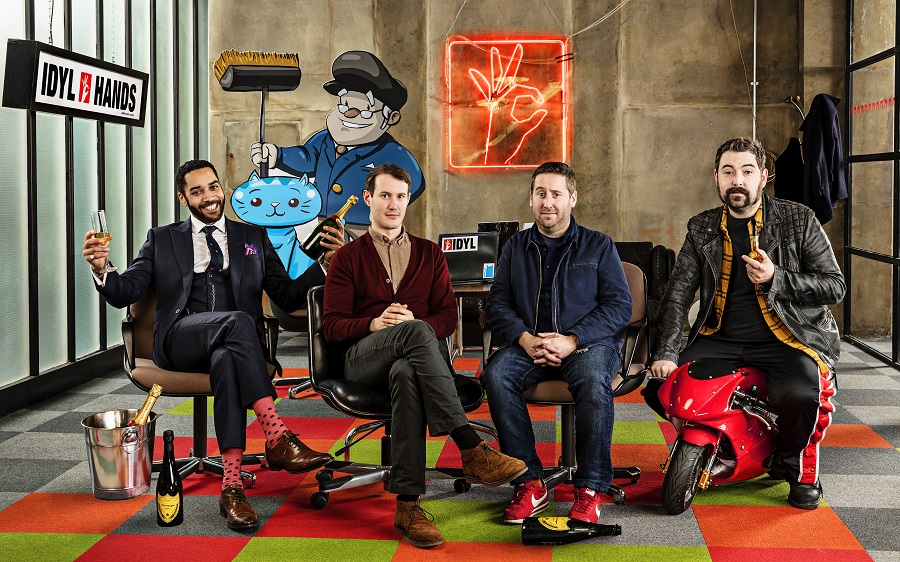 What would happen if you suddenly became a tech millionaire overnight? Channel 4’s new sitcom, Loaded, comes up with a wonderfully realistic answer, even as it begins with a man turning up on someone else’s doorstep with a barbershop quartet hired to swear in four-part harmony at an old enemy. That’s Leon, the leader of Idyl Hands, a company founded by four old friends, which strikes gold when their app (involving cats, obviously) rockets to success. Rather than swan off into the sunset with fantastical wish-fulfilment, though, Fresh Meat creator Jon Brown pens a comedy that keeps it feet firmly on the ground, in hilariously awkward fashion: Nick Helm’s Watto is recently sober after years of boozing, so winds up splashing cash on a large collection of shoes; Jim Howick is wonderful as Josh, the most moral of the bunch; Jonny Sweet’s awkwardly unpopular Ewan finds himself guiltily giving away undeserved bonuses to everyone around him; and Samuel Anderson’s swaggering Leon, well he’s busy with his barbershop quartets. There’s an enjoyably British feel to the whole thing, which skews far from Silicon Valley. What would happen if you suddenly became a tech millionaire overnight? You’d become a dick. The sign of the show’s success is how much fun it is to spend time with four of them. Laugh-out-loud stuff.

Taskmaster goes from strength to strength for its latest season, which continues to find inventive ways to make celebrities compete with each other for meaningly reasons and even more meaningless prizes – in this instance, the collected subscriptions owned by each of the contestants, which includes an annual subscription to daily emails containing photos of clouds. Greg Davies and Alex Horne are on wonderfully mean form as the judges setting the arbitrary, obscure challenges, but it’s the contestants who are the secret to the show’s success. This season, Joe Lycett and Noel Fielding add wit and surrealism respectively that is balanced by the entertaining presence of Lolly Adefope and Mel Giedroyc. Returning veteran Hugh Dennis finds increasingly innovative ways to solve the puzzles given to them – watch out for the excellent use of a door – while Giedroyc and Adefope prevent the one-upmanship that ranges from herding dogs to knocking over rubber ducks escalating into testosterone-fuelled arrogance. This really shouldn’t be this funny. But it absolutely is.