The Great Celebrity Bake Off for Stand Up to Cancer

Channel 4 did one of the smartest things possible when it poached The Great British Bake Off by not changing a thing in the show’s recipe (apart from the presenters). But one thing it did add to the mix was a string of associated shows, including Christmas specials featuring former contestants and celebrity specials for charity. And so it is that the Bake Off tent is back on our screens at the unusual time of March, but this isn’t the usual run of 12 episodes, but a shorter batch of four – and each episode has a different group of stars. Episode 1 is off to a typically entertaining start, with Harry Hill, Martin Kemp, Roisin Conaty and Bill Turnbull trying to make cupcakes, 3D biscuits and a fiery technical challenge. Sandi, Paul, Prue and Noe are all on fine form – Harry Hill getting a Sandi shake rather than a Hollywood handshake is an enjoyable undermining of tradition, but it’s Kemp who’s worth tuning in for alone, as his very first atttempt in the kitchen goes hilariously wrong. One word: buttercream. Thank goodness there are three more servings on the way.

With Ant’s personal life in the news headlines in between seasons of Saturday Night Takeaway, you might expect some drama or awkwardness as Ant & Dec return to our screens, but there’s no sign of anything out of the ordinary, as they once again host their ITV variety show with an irrepressible charisma and sharp comic timing. 15 seasons in, they show no sign of running out of enthusiasm, and this week’s episode is a resounding reminder that they’ve still got it, as it climaxes with an End of the Show Show tribute to Andrew Lloyd Webber that’s impossible to resist.

This new ITV comedy is a spoof of the now extremely familiar action thriller format, which sees a bunch of secret agents in a race against time trying to save the world. It’s far from Police Squad!, and a number of the gags are too crude to truly impress, but the cast throw themselves into the silliness without any hesitation – and when Murder in Successville’s Tom Davis is one of your leading men, the result is something that’s hard to dislike.

Available on ITV Hub until April 2018

One of the pleasures of anthology series is that they can offer the leading spotlight to a whole range of actors, rather than just a select one or two. And so, after Bryan Cranston, Timothy Spall and Holliday Grainger, up steps the always-excellent Juno Temple, who provides both the cool logic and human heart of this twisting apocalyptic tale. The story is set in a world where automation is the foundation of society, with one company – Autofac – still running, even with everything else in ruins. And so it sends out drones with parcels like clockwork, even as its main factory churns out pollution and risks killing off the tiny pocket of humanity living in its shadow. It’s an intriguing premise, one that raises questions about corporations, efficiency and our constant push for convenience through technology. Temple’s Zabriskie, who plans to end the whole thing, gives us an insight into the moral dilemmas opened up by that outlook taken to logic extreme – and, when Janelle Monáe’s customer service bot, Alice, shows up to help with their complaint, there’s some sparky conversation to be found in their existential sparring. Sadly, though, the killer blow the episode is looking for is missed, as Autofac fumbles its various twists and turns. At times, it recalls the Black Mirror episode Metalhead. If the latter is missing some depth to go with its surface, this could do with some of that story’s simple punch. 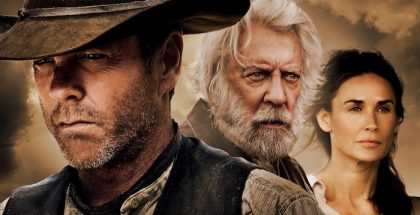