Amazon UK film review: Don't Worry, He Won't Get Far on Foot | Where to watch online in UK | How to stream legally | VODzilla.co

Rest of the cast

A thoroughly charming and hopeful comedy-drama celebrating the life of cartoonist John Callahan.

After 2015’s disastrous The Sea of Trees, without doubt the worst film Gus Van Sant has ever made, it’s good to see the vaunted indie auteur returning to form with his Amazon-backed biopic about cartoonist John Callahan, an artist who, after a car crash, became quadriplegic for much of his adult life. Paralysed from the neck down, he eventually learned to draw with his right hand, a scraggly form that became his unique and instantly recognisable style of illustration. The movie would rank somewhere around mid-table in Van Sant’s filmography – it’s a relief there’s been no repeat of The Sea of Trees or something turned in that could possibly mark a sorry decline. Instead, he’s found material that can exhibit both his mainstream and experimentalist sensibilities.

Don’t Worry, He Won’t Get Far on Foot – the title comes from an illustration depicting two cowboys tracking an empty wheelchair, a deliciously absurd example of Callahan’s mordant sense of humour – is headlined by a barnstorming lead performance from Joaquin Phoenix as an alcoholic disabled man with a lot of emotional baggage. While broaching very dark subject matter – profound guilt, drug addiction, emotional bitterness – it still manages to be bags of fun with a sunny personality and disarming charm; as if the tone of the film has tapped directly into Callahan’s cheeky identity.

In the beginning, Callahan is living a beach bum life in Long Beach, California. One evening, Jack Black’s Dexter, a friend and fellow party animal, invites him to go out on the lash. They drive while intoxicated, hit a string of bars, drunkenly climb over the wall of a theme park, ride a roller coaster, puke their guts up, then hit some more bars. On the way to a house party, Dexter passes out at the wheel. John is left paralysed, his buddy gets out with a few scratches. Callahan’s world is changed entirely and as part of the rehabilitation programme, he joins a therapy group led by Jonah Hill’s AIDS victim, Donnie. Also in the gang is Kim Gordon (from Sonic Youth), The Gossip’s Beth Ditto, German cult icon Udo Kier and Mark Webber, all playing broken people learning to come to terms with their various maladies and faults.

As flame-haired Callahan, Phoenix shows off every aspect of John’s psychological makeup: He’s funny, clever, heartbroken, bitter, lost to addiction and looking for a way out of his misery. The shots of him whizzing around the neighbourhood or up and down the street on his wheelchair, like he’s hell on wheels, beautifully convey the illustrator’s desire to move fast and experience the joy of movement, as his body is now a lifelong prison. Callahan is an amusing dude, but he admits he uses humour to mask the pain he’s felt his whole life as an orphan, an angst he also suppresses with endless bottles of hooch. The self-help dialogue and discussions about confronting our inner demons would be trite and cheesy, if Van Sant had opted for the film to be in a non-comedic vein, but the humour brings nuance and subtext to the deep-seated guilt John feels about the wrongs he’s committed in his life, and is also mined for scenes involving his sex life, confronting the audience with the fact disabled people get super horny too.

Van Sant aesthetically finds a way to bring his experimental side to proceedings, without it being distracting or out of place. Co-editing his film with David Marks, scene transitions, for example, or montage sequences, are presented as slides on a film, rolling across the screen either sideways or upwards, or like panels like in a comic strip. Danny Elfman’s eclectic scoring arrangements, too, take in everything from the opening credits jazz theme to classical compositions, creating a sense this is a movie never settling for one specific tone. There are animated sequences, and the illustrations depicted in the film are first-class zingers. One is inspired by a conversation with Portlandia’s Carrie Brownstein, who appears in a very small role as Suzanne, the health care manager who oversees John’s medical needs. Callahan wants to do an illustration about the Ku Klux Klan and racism. Stuck for an idea, he asks Suzanne if she has any. This leads her to mentioning she likes the feeling of fresh sheets straight from the dryer. John hits gold and draws two KKK men who, in speech bubbles, discuss their fondness for warm sheets out of the dryer (while dressed in them). Another great one is a doctor inspecting a man’s rectum and declaring he’s astonished because Starbuck’s have built a coffee shop in his ass (a gag about the company’s high street hegemony).

Don’t Worry, He Won’t Get Far on Foot is a thoroughly charming and hopeful comedy-drama celebrating the life of an artist (Callahan passed away in 2010) and how in taking the step to confront our deepest fears we can learn to live full and rewarding lives. What might have been a straight up awards-worthy movie in other hands is perhaps too idiosyncratic and freewheeling for widespread acclaim, but that’s precisely why it works and sets itself apart from others of its biopic ilk.

FilmStruck UK to shut down this month 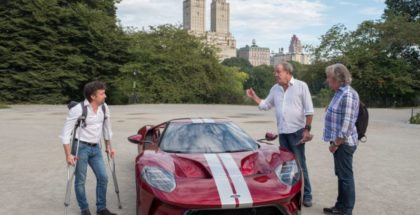