BBC TV review: Top Gear (2017) | Where to watch online in UK | How to stream legally | When it is available on digital | VODzilla.co 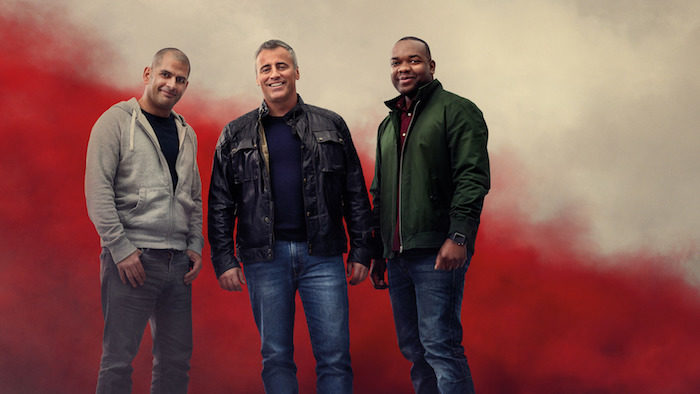 The BBC's retooled reboot gets off to a promising start, as its hosts collide with amusing confidence.

Top Gear fans can rest easy, because the BBC’s car series is back on track. Yes, after 2016’s uneven start to the franchise’s post-Clarkson, Hammond and May reboot, 2017 sees the show race back onto our screens with all the annoying bits (Chris Evans) stripped out and the rest of the parts given an impressive polish.

With Evans absent, it falls firmly on Matt LeBlanc’s shoulders to keep the show on the road, but as he proved with the first season of this new incarnation, he’s a natural. He’s having a whale of a time in one brief skit about a power hose, and deadpans being stupid with all the skill of a guy who’s not only played Joey Tribbiani, but also played an exaggerated version of himself in Episodes. Where Evans was loud and nervous, LeBlanc comes across as laid-back and assured, never trying to imitate anyone else.

That easygoing presence is infectious: LeBlanc’s co-hosts, Chris Harris and Rory Reid, both of whom impressed in the BBC Three spin-off Extra Gear last year, relish the chance to become main players in the programme, but appear just as relaxed. It helps that they’ve been doing this for years – particularly on YouTube, where they’ve each had a chance to find their own style and persona. Rory’s cheeky and excited. Chris is nerdy and not afraid to express his opinion. Neither of them seem to feel any pressure to fill the shoes of the departed Top Gear trio – or, indeed, those of Chris Evans. The result is a neat antidote to the former Top Gear presenters’ new show, The Grand Tour.

Yes, the second season of Top Gear 2.0 has two shows to compare with: BBC’s old Top Gear and Amazon’s new motoring series. While The Grand Tour dazzled fans and critics alike with its extravagant opening episode, though, Amazon’s bid-budget bonanza soon found itself struggling to keep up its entertaining speed, turning into something that felt bloated and often forced. Reid, Harris and LeBlanc, though, are the opposite; their banter, free from attempts at sparking headline-baiting controversy, flows comfortably, whether it’s insulting each other or encouraging their colleagues in their various challenges. Even cutting between them in the studio is kept as casual as possible, with LeBlanc simply yelling at Rory from across the hangar.

That informal tone means that what was once the weakest part of the series, the celebrity interview, becomes entertaining for the first time in years – when Top Gear has worked out how to do celebrity guests well, you know that things have improved. When he rocks up, James McAvoy simply joins in the chat, while the show smartly reverts to the classic Top Gear track, doing away with the rally nonsense and instead giving us a chance to see Harris coach the actor through a training lap, schooling him (rudely) in how to drive the new, faster car.

It’s not all amiable talking, though: the filmed segments show Top Gear can still deliver the stylish goods, from a gorgeous opening test drive of the ultra-exclusive Ferrari FXX K – which proves that the series has as much money as Chris Harris does superlatives – to the central sequence, which sees Matt, Chris and Rory race across Kazakhstan in three well-worn vehicles: a Mercedes saloon, a Volvo estate and, best of all, a London taxi. It fuses insightful travelogue and gags about Stoke with some genuinely funny rivalry, as all three of them don’t hesitate to cheat to get ahead. Where such escapades, particularly on The Grand Tour, can feel scripted or fake, though, this all feels unplanned and real, from unexpected collisions and uncontrollable runaway cabs to uncomfortable uses of goats. You won’t get bored once – and, even more impressive, you’ll laugh. Multiple times.

The result is an impressively diverse hour of motoring silliness, which reminds you just how enjoyable Top Gear can be, when it’s not trying to be something else. Holding back Sabine Schmitz and Eddie Jordan for future episodes is a clever move, giving us time to get used to the new central trio, although they don’t seem to need it. Immediately demonstrating they’re a safe pair of hands, they rush off the starting grid, enthusiastic, likeable and unconcerned about what people think of them – an attitude that means the programme’s as confident showing rockets blasting off to the moon as it is watching Chris Harris pick through his old DVD collection complaining about minor continuity errors. The latter is worryingly amusing, and the kind of thing you can’t quite imagine Clarkson, Hammond or May doing, which is precisely why it works so well. Is it an all-time classic slice of Top Gear? No. But presuming that the show can only fine-tune things as it goes on, this new, streamlined vehicle has the potential to wipe all memory of the Chris Evans-fronted series from your mind. It might even (whisper it) be better than The Grand Tour.

Episode 1 of Top Gear 2017 is available on BBC iPlayer until 4th April.