BBC Three TV review: Flat TV | Where to watch online in UK | How to stream legally | When it is available on digital | VODzilla.co 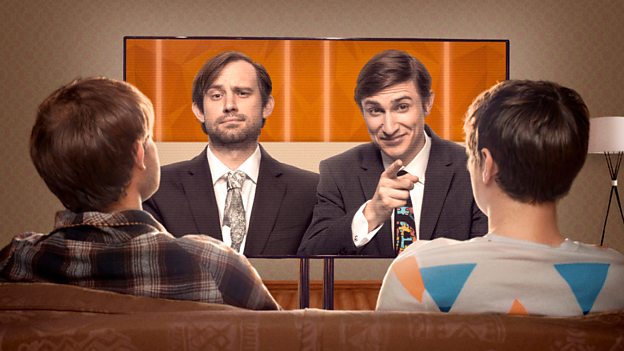 The words “flatshare” and “sitcom” may not fill you with excitement, but Flat TV, BBC Three’s latest new comedy series, defies your expectations (and its title) throughout: it doesn’t fall flat once.

The show follows Tom and Naz, two twenty-something flatmates who bumble their way from one domestic mishap to the next. One is controlling, the other eccentric. Both are idiots. Rather than serve up yet another show about white men-children and their first world problems, though, Flat TV transforms that stale premise into something brilliantly new.

The secret? The whole thing consists of spoofs of popular TV programmes – a concept that sounds tired, until it’s fused with the inane reality of everyday. Together, they make for a hilariously daft comedy, which uses its format to keep things varied and consistently unexpected.

It’s rare for comedy shows to offer genuine surprises these days, but whether it’s Naz inventing a Swiss Army Hat (a cap with cutlery stuck to it) or Tom being hit by a homeless person, there’s a guaranteed moment in each episode that you won’t see coming.

The show is directed with energy by Declan Lowney, who knows his way around silly characters (he helmed Alan Partridge’s feature-length outing, Alpha Papa), jumping from I’m a Celebrity stunts and Masterchef cutaways to news reports summing up the most mundane events imaginable in deadpan style.

That contrast between the over-the-top parodies and the minute details of day-to-day flatsharing is at its best during those faux-headlines and it sets the tone for a world where the ridiculous can erupt without seeming forced – in one episode, we hear of a murder mystery party that happened, but the murderer was never found. In another, we meet pizza delivery man Carl (Javone Prince), who likes to reference classical Greek mythology. In a different series, annoying neighbour Aoife (Renecca Gethings), who used to be the apartment block’s fire warden (“So many memories, so many fires…”), could be a boring stereotype, or straight-faced Sophie (Alicia Scott-Fawcett) could be little more than Tom’s token object of affection, but they both manage to be plausible characters. Crucially, they also prevent the show from falling back on lazy or mean humour – the butt of the joke is always our male duo.

Throughout, the chemistry between Tom Rosenthal and Naz Osmanoglu is superb, smacking not just of sincere friendship but of carefully rehearsed comic timing. Their show began life as a web series back in 2012, called Flat News, and it’s immediately apparent that the two are used to performing together. Where one might usually be the straight man and one the funny man, Flat TV’s format allows them both to alternate depending on the skit at hand, switching from normal to weird and back again, often at the same time. They deliver one-liners with a relaxed confidence – “Mayonaz: Sauce yourself,” murmurs Naz, seductively, after inventing a new type of condiment – and are equally comfortable looking quietly shocked or yelling at each other like Rik Mayall. You could watch them root through a rubbish bin together and still be entertained. In fact, you will.

The result is a non-stop burst of original absurdity – and one that you can enjoy non-stop, thanks to BBC Three’s decision to offer up all four episodes in one go at 6pm on Thursday 24th March. That box-set release is a milestone for the online TV channel, but just as Thirteen did for its original drama, Flat TV confirms that nothing has changed at the new BBC Three: this is a channel that has always been good at spotting and nurturing talent and Flat TV is a perfect example. As ground-breaking in format as it is in distribution, the show is funnier than most sitcoms on mainstream, traditional channels. Flat TV is surreal, smart, self-aware and very, very silly. A flatshare sitcom that actually leaves you wanting more? That really is something worth writing news headlines about.

All four episodes of Flat TV are available to watch online on BBC iPlayer until 8th January 2019.

For more on what’s new on BBC Three and what’s coming soon to the online channel, click here.