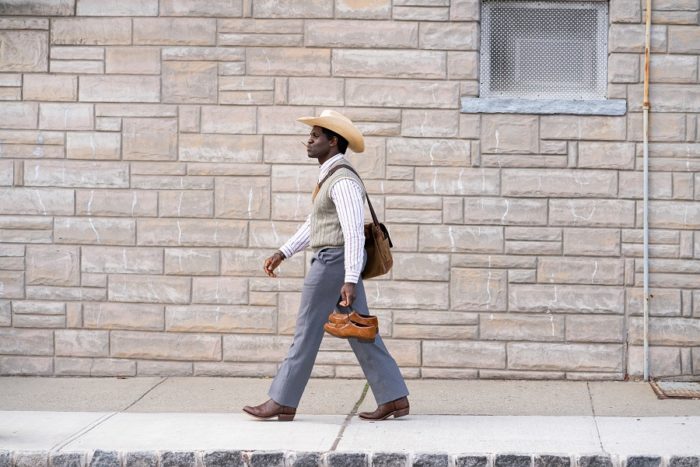 This heartwarming anthology of coming-to-America tales is an uplifting, inspiring watch.

“You belong here as much as they do,” a coach tells young student Marisol (Jearnest Corchado) in Little America. A compendium of tales following immigrants coming to America, or Americans born to a generation who did, Apple TV+’s new series is an anthology of those little moments – tiny declarations of identity and affirmations of belonging. In the current political climate, they hit hard with heart and hope.

The knowledge that they’re based on real-life biographies gathered by Epic magazine only gives each of the eight episodes more impact. Created by Lee Eisenberg (The US Office) and Kumail Nanjiani and Emily V Gordon (The Big Sick), the show looks past the facts and figures to focus on the human core of each story, treating every individual with respect.

With that respect comes a wonderful attention to detail, as the team stuff each frame with meticulously assembled objects, locations, touches and glances. By distilling these eight portraits into 30-minute snapshots the economy necessitated by the format is not only elegantly precise but also profoundly simple.

Things begin with The Manager, the story of Kabir, who is is left to run the family’s motel when his parents are deported. The fact that he’s only 12 at the time makes the whole thing more moving, with Eshan Inamdar leading the cast with an earnest determination that’s hugely endearing to witness. It’s a sweet companion piece to The Cowboy, which follows Iwegbuna Ikeji (Conphidance), a student in Oklahoma who also spends his time dwelling on his family back home. We’re introduced to the Nigerian as his family watch cowboy movies together and every phone call – or cassette tape message – he sends and receives contrasts with that ensemble tableau, as we cut between his relatives apparently there in the same room, and him alone with a tape player or handset.

The Cowboy, though, also leans on his affection for that US cultural staple to build bridges in the community, bonding through clothes and music, to the point where his intelligence and expertise on economics eventually shines through to those around him. Kabir, in a similar way, finds himself through the National Spelling Bee, going all the way to the White House off the back of his own abilities. There, he asks for help from the administration, only to learn that things are more complicated than that.

The Jaguar, Episode 2, on the other hand, drills down into the self-reliance of Marisol, who learns to play squash through her fierce, world-wise coach. He teaches her that she must drive herself to succeed, that life doesn’t give second chances like a squash court does – and Jearnest Corchado balances the rage against an unfair system and the frustration of living undocumented in a garage with her mum with a growing self-confidence. That she signed up for squash in the first place just to get the free shoes is a small reminder of the poverty she’s trying to transcend – as is the encounter during one formal drinks reception with the woman who employs her mum as a cleaner.

There’s a passion as well as a compassion at play in these stories, which tap into the common dream all of these people have: to become part of America, a land that has always welcomed those from overseas to make their own future, even if recent years seen to have forgotten that.

The series hits its peak, perhaps, with The Silence, an almost dialogue-free half-hour that charts a fledgling romance between two strangers at a silent yoga retreat. Zachary Quinto is knowingly stern as the mute instructor, while Bill Heck is gruffly charismatic as Jack and Melanie Laurent is heartwarmingly sincere as Sylviane. Take away language and society, the barriers that prove obstacles (or provide excuses for obstacles) in every other episode, and you have pure proof that connections between humans are fundamentally universal, a reminder of how easy it is to get distracted from that by culture, politics or expectations.

Sian Heder, who worked on Orange Is the New Black as well as Netflix film Tallulah, directs the wordless sequences with a laugh-out-loud sense of physical humour and lightness of touch, setting a bar that the other directors – including Bharat Nalluri (The Man Who Invnted Christmas) – keep consistent throughout.

The result is the best Apple TV+ series so far, and a sweet tribute to all those coming to America that welcomes their identities, their experiences and their contributions to the country – end credits titles show us photos of each episode’s real life subject and a recap of their achievements. If that means the overall tone is a little too uniformly upbeat, that’s no bad thing: the world needs a little positivity. And, as the tech giant’s streaming underdog tries to carve out a space to compete with TV rivals, it’s proof that it belongs here as much as they do.

Little America is available on Apple TV+, as part of a £4.99 monthly subscription, with a seven-day free trial. For more information on Apple TV+ and how to get it, click here.