Amazon UK TV review: The Grand Tour Season 2 Episode 6 | Where to watch online in UK | How to stream legally | When it is available on digital | VODzilla.co

Stars in a reasonably priced car

The Grand Tour continues to accelerate down the lane of success, thanks to the motoring series’ relatively recent discovery that it’s OK just to be a show about cars, without any of the extra nonsense. Even a brief joke about Richard Hammond being racist, because he can’t pronounce the name of Aston Martin’s Chief Technical Officer (Max Swaj), is harmless silliness that places the joke firmly on the presents.

Clocking in at an hour’s running time, you might think Episode 6 of The Grand Tour’s second season would be struggling for padding or reaching for the deliberately scandalous stunts, but instead, the show just fills the screens with lots and lots of cars. Jaguars, to be exact, as Jeremy Clarkson, James May and Hammond each indulge in their fondness for the iconic vehicles, which they pronounce “Jaaaaaaags”.

That joke gets a little old, as they repeatedly talk about how the reputation of the Jag is one of dirty rotten scoundrels and criminals, but they vary things up, even to the point of going shoplifting to prove how rotten they’ve all become as a result of their Jag passion. What is a joy, though, is seeing their cars in action, as the trio are determined to demonstrate that Jaguars only get better with age. And so we’re treated to string of challenges across Colorado (no, we don’t know either), which gradually take each of the cars out of action.

A dirty track in the desert sees Richard Hammond gun his Jaguar 420G at a speed that the old dear simply can’t handle, daring to take a jump and losing his boot and half the engine in a second – an attempt at showing off that leaves Clarkson and May shaking their heads in disbelief. Cut to: Hammond in a Jaguar 420G in a pristine condition, now with an added sun roof. Then, a drag race and speed-braking test on a Telluride runway that ends on the edge of a cliff, leaving May struggling to get his slow Jaguar XK8 up to 100mph before hitting the stop pedal – and his car plummeting off the edge of the mountain as a result. It’s a crunchy, spectacular crash and a fatal fall. Cut to: May driving in a different colour XK8, talking about how invincible his vehicle is.

It’s a cracking running joke, and an example of how witty The Grand Tour can be when it’s brave enough to keep things simple – seeing Clarkson (in an XJR) ward off a US police officer by showing them his passport and quoting a bit about how his travel should be allowed to continue unimpeded is a trick you’ll be dying to test for yourself. It drags a bit, to the point where it feels like filler, but the hefty filmed segment culminates in a downhill skiing set piece that is visually impressive, stylishly edited (complete with token James Bond-like music) and enjoyably different. (Yes, another Jaguar crashes by the end of it.)

But what makes The Grand Tour’s latest jaunt a veritable success is the Celebrity Face Off segment, which confirms that the show has finally ironed out its dullest feature, turning it into one of its best. This episode, Luke Evans and none other than Kiefer Sutherland duke it out to see who’s the fastest actor with the middle name George, and the pair are fully up for both petrolhead chat, as well as general daft banter. Evans’ Fast & Furious experience pays off, but Sutherland puts his foot down to deliver an unexpectedly entertaining ride around the dusty gravel track. Evans, for good measure, brings his father to stand in the studio audience – prompting an unscripted tangent in their conversation that’s yet another bit of humour fuel in the tank. Is there anything especially memorable or different about this episode? No. But keep them at this standard for the rest of the second season and The Grand Tour is in serious danger of being actual fun. 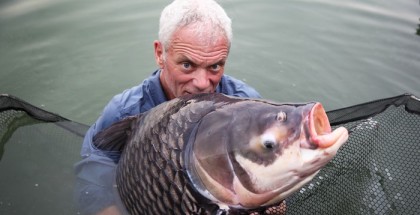