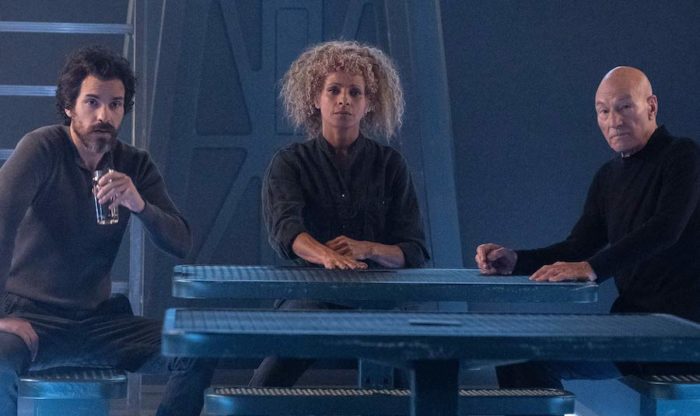 Great potential is lost in a climax of unfulfilling lore and convenient plotting.

Having spent seven episodes collecting the puzzle pieces, Star Trek: Picard finally decides to put them together in the aptly titled Broken Pieces. With the notable absence of Jean-Luc himself, the episode focuses on Raffi’s attempts to get Rios to talk about his past – with a little help from his holograms – while Narissa’s ruthless plan becomes clear aboard the Borg Cube.

Penned by Michael Chabon, who so far has produced Picard’s most character-focused and emotive work, Episode 8 falls short of the mark in almost every area. Eschewing the goodwill and well-crafted nostalgia that made Episode 7 a triumph, Episode 8 is scene after scene of expositional catch-up, once again employing convenient technologies and unimpressive mythology to get the characters – and the writers – out of danger. It should be a foregone conclusion that writing a show about machines becoming Gods doesn’t give carte blanche to use deus ex-machina at every available turn.

While Rios’ multilingual holographic family have delivered some of the more heartwarming character work so far, the reliance on them to deliver comic relief is poorly hidden as Raffi attempts to help Rios through his trauma. Raffi’s role of heavy-drinking name-taker is completely abandoned as Rios does most of the drinking, and Seven of Nine does the name-taking, and she’s awkwardly re-imagined as the ship’s counsellor. With Soji’s past being uncovered, and people left behind on The Artefact, it’s unclear why this is the ideal time for the La Sirena Captain to lock himself in his room, and then spill his trauma to a formerly uncaring shipmate.

Aboard the Artefact itself, Elnor is on the run from Narissa with some help from an inexplicably present Seven of Nine. Between the writing team and Evan Evagora, the Romulun Ninja still can’t find any depth of character, meaning his dangerous situation elicits very little emotional reaction. Seven of Nine’s contribution is a little more effective, but once again embodies the show’s reliance on technological marvel and spectacle delivered in place of cohesive ideas. It’s entertaining in scope, but little else.

Picard and Agnes’ involvement also seems woefully compressed, squeezing out all of Chabon’s usual emotional depth in lieu of story progression and a pacy runtime. The rushed conclusion to a season-long mystery certainly fails to wow, although now that the eight-part puzzle has been pieced together, the final two-parter will hopefully end the season on a better crafted and more impactful note.

Star Trek: Picard is available to watch online on Amazon Prime Video as part of a Prime membership or a £5.99 monthly subscription. Episodes arrive every Friday, within 24 hours of their US debut.

The most major possible spoiler of the show would also seem to be the most disappointing. Having awaited it for eight episodes, it’s difficult not to see the Zhat Vash conspiracy as a complete let-down. Effectively, the reason there’s a secret society who fear synthetic life is because there’s a secret society who fear synthetic life. Little more is explained beyond the portal of warning they look into and seemingly lose their minds. It’s a ropey piece of myth that doesn’t tie much together or give any further dimensions to Narissa, or explain Narek’s involvement, or really give the audience much more information than we had already.

The forgiveness of Agnes for murdering Maddox also seems awkwardly plotted. Though she was under some kind of manic control from Commodore Oh – not unlike the Zhat Vash portal – the crew members allow her deception quite readily once everything falls into place. Alison Pill is allowed one of a few chances to really act, but beyond that it’s left unsettlingly unanswered.

Similarly, Rios’ traumatic past is revealing and fits perfectly into the puzzle being assembled. Had it been drip-fed it might’ve had a more poetic impact, but in this context it simply feels tedious and predictable.

Seven of Nine’s re-integration and creation of a micro-hive gets the same treatment. An interesting idea that isn’t really explored beyond allowing Seven and Elnor to escape, and summarily results in very little, as Narissa and co. then leave by themselves to hunt Soji. Seven’s split-second choice to act as de-facto Queen to an army that previously enslaved her has real emotional potential – as do many of the storylines in the episode – but is decimated by the running time into a two-minute parlour trick.

Where can I watch Westworld online in the UK (legally)?