Catastrophe is not the most reassuring title for a romantic comedy. But Channel 4’s show, so good that it was snapped up earlier this year by Amazon Prime to distribute in the US as an “Original”, isn’t a catastrophe in any way, shape or form. In fact, it’s the opposite.

The series stars Sharon Horgan and American comedian Rob Delaney as Sharon and Rob, who meet during his business trip to London. A six-night stand later, he discovers she’s pregnant – and promptly flies back over from America to do the honourable thing. Which mostly involves having more sex.

Catastrophe doesn’t shy away from the raunchy side of relationships, nor any other side, for that matter: the conversations between our couple manage to be saucy, silly and serious all at the same time. It helps that the pair wrote the show for themselves, playing to their own strengths and allowing their natural chemistry to fizz and pop. It more than pays off: there’s a constant sense that these aren’t two actors delivering a series of one-liners, but two flawed, fully-rounded people whom we happen to be watching. They’re not trying to make an audience guffaw; they’re trying to make each other do it. They succeed, frequently, and those giggles feels as much a part of their courting process as their frequent shagging.

The courting process itself, though, is smartly subverted. Their initial meeting is over in 30 seconds, as they rush into the bedroom, while the rest of their first dates skip past in a blur of a montage. Suddenly, they’re into the serious relationship stuff – moving in together, relocating to a new country, meeting the parents, getting engaged – but like us, they still don’t really know each other. “Are you mental?” Sharon wonders. “Marry me and find out,” comes the smart aleck reply.

The juxtaposition between commitment and casual intimacy gives things a bite that balances out the bonking and the bickering. “You let me put my penis in your mouth, but you won’t let me put my t-shirts in your drawer?” exclaims Rob, as he struggles to find wardrobe space in her room. “Please don’t rush me,” Sharon retorts. That cynicism sums up the show’s international style perfectly: it’s packed with more gags than a British sitcom, but avoids the sentimentality of a US series. At no point do the couple say “I love you”. They do, however, say things like “pre-cancer”, “you’re the second biggest thing in this flat after the bed” and “if one of us brings up pregnancy or visas, the other one can punch them in the face across the table”. The only “l” word here is laughter.

The result is spiky, sexy and carries an endearing sincerity that bristles with all kinds of tension. Stock scenarios, such as the awkward best friend that neither of them like, feel brand new – and, like their laughter, brings the duo together through mutual disgust. Carrie Fisher as Rob’s bossy mother, Mia, turns a stereotype into a scene-stealing source of emotion and humour. All the while, Delaney’s wise-cracking grin and almost-chiselled straight face are a natural contrast to Horgan’s worried soon-to-be-mum, who can fire put-downs at a pace that smacks you right in the funny bone. As the couple clumsily stagger between urine-soaked rings and confusing doctor’s appointments, the honesty on display (the scripts are based, you suspect, partly on their own experiences) is hugely relatable. Unlike the soppy, sanitised version of love you usually see on-screen, the six-part show reminds us that, to some degree, everything in real life is a catastrophe. The secret is to laugh your way through it.

Never contrived, never uncomfortable and always howl-out-loud and heartfelt, Catastrophe is a gem of a TV show and quite possibly the best comedy you’ll see all year. 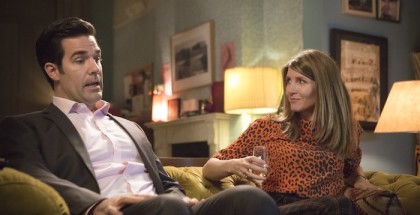 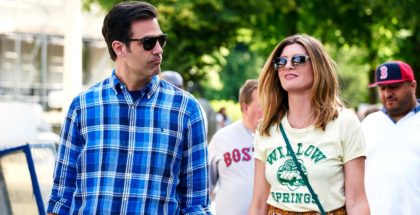