VOD film review: The Fitzgerald Family Christmas | VODzilla.co | Where to watch online in UK | How to stream

Burns plays Gerry Fitzgerald, the oldest of seven siblings, who became the de facto father figure when his dad, Jim (Ed Lauter), walked out on the family 20 years ago. Still living with his mother, Rosie (Anita Gillette), in Queens, New York, Gerry attempts to organise the annual family Christmas get-together, but his efforts are complicated by the fact that his father has resurfaced and is asking to spend the holiday with his family, a request that’s partly motivated by the fact that he’s been diagnosed with terminal cancer.

With his mother adamant that she doesn’t want to see Jim again, Gerry decides to canvass the opinions of his brothers and sisters, some of whom are more resistant to the idea than others. Meanwhile, all six siblings have their own problems to deal with: Quinn (The Brothers McMullen’s Michael McGlone) is planning to propose to his much younger girlfriend (Daniella Pineda); Sharon (Kerry Bishe) is in a new relationship with a rich, creepy older man (Noah Emmerich); Dottie (Marsha Dietlein Bennett) is having an affair with her gardener; Erin (Heather Burns) is clashing with her mother over Rosie’s desire to get Erin’s (Jewish) baby baptized; newly pregnant Connie (Masters of Sex’s Caitlin Fitzgerald) is being knocked about by her sullen, unemployed husband (Dara Coleman); and youngest brother Cyril (Tom Guiry) has just emerged from a stint in rehab. In addition, Gerry somehow finds time to embark on a tentative romance with his elderly neighbour’s carer, Nora (Connie Britton, who made her big-screen debut in The Brothers McMullen).

As writer-director, Burns does an excellent job of balancing so many different characters and sub-plots, allowing each actor a chance to shine and pulling off satisfying conclusions to each of the various stories. Similarly, the characters interact in believable fashion, aided by Burns’ ear for authentic-sounding dialogue, while the script skilfully avoids the predicted levels of sentimentality, opting for quietly moving, understated moments instead.

With the exception of Coleman, who’s rather wooden as Connie’s husband, the performances are solid across the board. Burns is a likeable, calming presence at the centre of film and he has engaging chemistry with Britton – their scenes together are genuinely charming. There’s also strong work from Bishe, as the youngest and angriest of the sisters, while Gillette and Lauter are effectively cast as the long-separated parents.

From the set-up (extended Irish family Christmas), you could be forgiven for expecting something a lot more raucous, but in fact, this is a nicely observed, heartwarming little drama that keeps everything refreshingly low-key and is all the more effective for doing so.

The Fitzgerald Family Christmas is not currently available on Netflix UK. 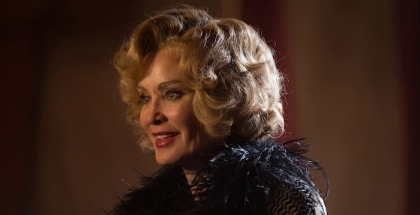