VOD film review: Christmas Eve | Where to watch online in UK | How to stream legally | When it is available on digital | VODzilla.co 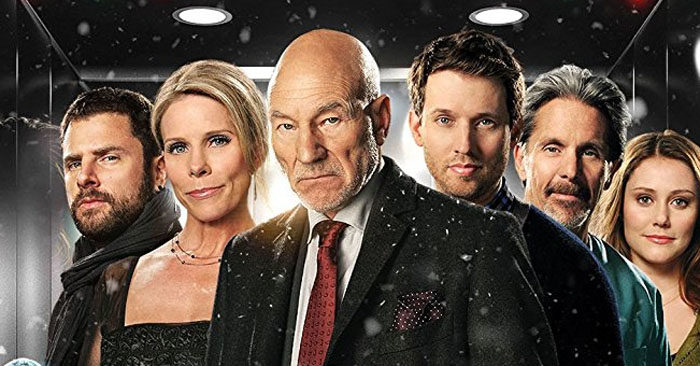 Christmas Eve sucks the life out of Christmas. Even Patrick Stewart can't save it.

You may be surprised to know that Christmas Eve is not, we repeat not, directed by the same person as Valentine’s Day or New Year’s Eve. Surprised, because not only do they share a similarly structured grouping of random stories and famous faces, but they’re also all awful. In that respect, you’re almost willing the three to be part of some sort of terrible trilogy fit for smaltzy, cringeworthy purpose.

The premise for Christmas Eve feels aptly ridiculous. After a delivery driver ploughs his van into the incredibly small fuse box that appears to power a chunk of the surrounding New York City tower blocks and apartments, we’re thrown into a series of brief and skittish intros to various groups of random people. It’s a tired way of conveying things, but this festive accident incidentally brings these people together as a means of creating half a dozen different stories whereby the ‘victims’ (and we use that term for the poor actors dragged into this mess) are trapped in a number of lifts across town when the power suddenly goes.

While watching everything sickeningly slot into place, it’s best to put logic to one side. Where are the backup generators, emergency services, or the intellect for anyone to attempt an escape?

The prospect of Sir Patrick Stewart and an assortment of other recognisable faces, including John Heder, Cheryl Hines, and Gary Cole, will give a brief moment of optimism, until such good will fades with the writer’s ability to pen a believable conversation. Despite an appealing (albeit mixed) selection of stars, a few things become clear.

First, Sir Patrick Stewart seemingly fronts the film, but is in it relatively little, which is a shame. Second, the unquestionably awful inclusion of CGI and green screen. The budget looks like it went on paying the cast rather than its visuals, which, even outside the ‘special effects’, are drab and cheap-looking. Director Mitch Davis frames and shoots the lift interiors horribly. Its use of shaky cam in a confined space is totally redundant, only serving as an unpleasant distraction from the excitement a script that makes watching paint dry a feasibly entertaining alternative.

What becomes most glaringly obvious, though, is the way the multiple stories drain the life out of the festivities and of the poor audience. If you’re looking for a fun, frivolous Christmas movie, you’ve come to the wrong place; for something posing as a heartwarming festive flick, the comedy is hands down atrocious. (If you can’t write a script that has humour, wit and an air of something better than lowest common denominator gags, you don’t deserve to call yourself a comedy writer.) Patrick Stewart is written as an overtly mean character. Others are either kind or creepy or plain odd. But it’s not just one or two that are written so thinly – they’re all like that. Everyone is the most two-dimensional character imaginable, and it’s mind-numbing.

Even a well-intended Sir Pat monologue can’t save the film. In fact, it makes it whole affair worse. Frankly put, Christmas Eve is dull – really dull. And consistently boring. It desperately tries to be personable and diverse with its collection of stories, but it’s actually the most generic, uninteresting, unfunny set of individuals to have randomly come together since Movie 43. Christmas Eve sucks the life out of Christmas. You can just about get through it, perhaps, if you’re feeling particularly generous (and drunk).

Christmas Eve is available to watch online on Amazon Prime Video as part of a Prime membership or a £5.99 monthly subscription.

Where can I buy or rent Christmas Eve online in the UK?