Interview: The Elephant Queen directors Mark Deeble and Victoria Stone talk the environment and Apple | Where to watch online in UK | How to stream legally | When it is available on digital | VODzilla.co

This weekend saw the launch of Apple’s new streaming service, Apple TV+, and while the focus has been on sci-fi series See and news drama The Morning Show, one of the platform’s titles stands apart from the rest: wildlife documentary The Elephant Queen. (Read our review here.)

After screening at Toronto and Sundance, the nature film follows Athena, an elephant matriarch who leads her herd across an unforgiving African landscape in search of a new home. Narrated by Chiwetel Ejiofor, it’s a story of family and courage, as well as survival, and is the product of five years’ working in the field in Kenya. We sit down with directors Mark Deeble and Victoria Stone to talk about the environment, reaching people worldwide and being the first Apple TV+ feature film.

It’s hard not to be immediately drawn in by Chiwetel Ejiofor’s voice. How did he get involved?

VS: He became involved in two ways. He loved the film and we thought his voice would be absolutely perfect for what we were looking for – a rich, deep storytelling voice. I always imagine it as some sitting by a fire and saying “I’m going to tell you a story…”

How did it work? Did he have a rigid script to work from?

VS: He recorded right towards the end, so what we had done, it was picture-locked and every aspect of it was done. Mark had already read it, so Chiwetel could see it, albeit with Mark’s voice over the top, with the script written. There might have been a couple of words improvised, but not really. When he was recording, he at first did it to picture, but then we decided it would be better if he did as if he were acting in the Globe Theatre, so we took the picture away and he would, if you like, tell the story, but as if he were telling an audience – we didn’t want it to be straight narration, but telling a story.

At one point did you come up with the story for the film?

MD: We were there four years in the field. And so it was already knowing what we wanted to say as the arc of the story, which was really to make a film about a charismatic matriarch and her family, when they were forced to leave their wet season kingdom, and at the same time bring in those smaller creatures to give it context. It’s often about allowing the action to unfold…

VS: We do all the research we can do before we start, so elephants in this case, and with that arc of the story, because we’re in the field, the whole time – we might come out for six weeks of the year for a break – and living in the wild alongside the characters in the film, all we need is the arc of the story. We’re such a tiny team and we’re always talking about the story and the film, so we can react to what happens.

“It’s trying to anticipate when things will happen and trying to capture them.”

How does that work in the field?

VS: A lot of the time is not spent filming,

MD: It’s spent trying to understand what you’re seeing. There’s a scene near the beginning where bullfrogs are mating. It looks like it might happen all the time, but that happened once in the four-year period we were there. You need three or four inches of rain overnight, the frogs come out of the ground and make love for a few hours, then they just eat for the rest of the time! It’s trying to anticipate when it’s going to happen and trying to capture it. Most of it happened at night, so we were lucky that one couple was there in the daytime.

VS: The advantage of being there the whole time is you’re poised for the unexpected.

MD: And you can react to situations where, if you were a crew going out from the UK, you would miss things.

VS: Normally, it’s two years but this was four years, a much more ambitious project, because it was a feature film.

Is it then just a case of having faith that it’ll come off?

MD: I can remember several times thinking “This is as precarious as making as first film which was self-funded.” We were learning on the job then and this felt as precarious as those early days in our early 20s.

VS: As we’ve taken on one film after another, I remember we took a film on in Lake Tanganyika. You put your head underwater and see all these fish that look the same and you think “How on Earth are we going to make a film about this?” I remember saying to myself that I would never doubt a subject again. You have to take it on, believe in it, and keep on going. If you’re doing it as independently as we were, the biggest challenge is keeping going mentally, believing in it, and not letting go or questioning what happens if it doesn’t work – that isn’t a possibility.

“The more time you spend with elephants, you realise they’re the same as you and me…”

At what point do you start giving the animals names?

MD: The matriarch, Athena, was already named by scientists.

VS: We thought we would change that name, actually, but we just couldn’t in the end.

MD: As we were talking about the other elephants and characters, we started giving them names because that was the easiest way to refer to them. We’ve never named a subject before in a wildlife film, but then the documentaries we’ve made in the past have been about fish and things. Elephants are just such charismatic creatures. It’s like you’ve got a dog or a horse, you end up naming them. It’s interesting that scientists working with them do the same thing – they might start with letters or numbers or such, but they end up naming them.

There’s always a question of us projecting onto animals…

VS: Yes, one thing we discuss a lot is anthropomorphism.

MD: We’re constantly questioning our approach and evaluating it. I think what we feel is it’s quite an anthropocentric view of the world. My background was in zoology and once you’ve spent enough time with animals such as elephants, I think the emotions we have are common to us all, displayed to greater or lesser degrees. The more time you spend with elephants, you realise they’re the same as you and me, they are individuals. Some are incredibly engaging, you can tell if one is sad or happy, so it’s about that recognition that we share common emotions.

VS: I always think of it as why, as human beings, we assume that we’re the only ones with emotions…

Does that emotional engagement help guide or influence the family-friendly tone?

VS: I think what we wanted to do was tell a story that had happy moments, sad moments, that engaged you with characters you got to know, whether it’s the small creatures or the elephants. What we’ve found is so many parents saying afterwards, “My kids kept talking about the film all weekend!” This sounds a little pretentious, it’s not supposed to be, but when I imagined what we were doing, I’d imagine a cooking put and put in a pinch of March of the Penguins, a bit of The Lion King, a sprinkling of Shrek. So then you had a film that was hopefully entertaining from 8 to 80-year-olds, but at the same time, hopefully led you into the elephants’ world.

“We wanted to make a film that could make people fall in love.”

Were you surprised when Apple TV+ arrived on the scene? What was your aim for the movie?

VS: Our aim from the beginning was to reach the broadest possible audience, not just exclusively those who already watch natural history, but at the same time, make a difference with the film for elephants on the ground in Africa. Partnering with Apple TV+ is the pinnacle for us because we have a partner that can reach such a broad audience and also want to make a difference. We just thought it was such brilliant timing, it really couldn’t have been better. They completely got it.

MD: We were just thrilled that, you know, Apple because they were launching Apple TV+, this just happened to be their first feature purchase and first feature release. We couldn’t believe our film could appeal in that way. What we love is they gave it a theatrical release, but there are also so many Apple devices out there. What it can do for elephants is so exciting.

VS: When we made the film, poaching become a real crisis. We did at one point think we could make a film about that, but other filmmakers were doing that really well, and it was so important to keep going with what we were dong, and build a world around the film that would invite people to engage with elephants in a different way. All sorts of things are satelliting around the film, which is exciting to see. If this film is going to be seen in China, where ivory is valued and sort of, to change people’s hearts and minds might be more effective than a film that uncovers issues – those need to be made too, of course, but we wanted to make a film that could make people fall in love.

There’s a growing awareness of the urgency surrounding climate change. With streaming documentaries helping to drive that global reach and discussion, how hopeful or frustrated do you feel at present?

VS: I think there’s so much to be done. One has to remain hopeful, determined and positive, but recognise that we all have to do all we can to recognise the climate change crisis.

MD: And address it.

VS: I think it’s mixture, you’ve got to stay hopeful to have the drive and determination, but you’ve got to acknowledge the problem. It’s both.

What’s next for you?

VS: In the immediate, we’re focused on the big launch in Kenya, and we’ve committed to putting our time into that.

MD: This is a big education and outreach project. We’ve got 28 Learn to Read books based on characters from the film that will go into the Kenyan curriculum. It’s about getting kids to engage from the very start with the climate but also with the environment and the characters, so you grow up with figures like Wewe as much as you would with Biff and Chip, for example.

The Elephant Queen is available on Apple TV+, as part of a £4.99 monthly subscription. For more informaton on Apple TV+ and how to get it, click here.

The November 2019 Watchlist: 25 highlights and UK TV air dates for this month 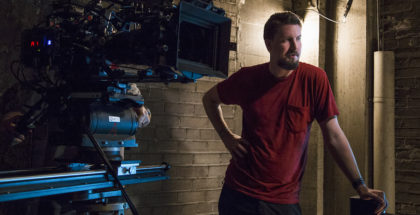