Interview: Peter Serafinowicz talks The Tick | VODzilla.co | Where to watch online in UK

Amazon’s latest show, The Tick, has arrived in all its six-part glory this weeked. Based on Ben Edlund’s superhero character, previously seen in an animated and live-action TV format during the mid-90s and early 00s, the latest take on the comic bok comedy has Peter Serafinowicz don the big blue suit to save the world with brute strength and thickheadedness.

We catch up with Peter to discuss the role.

[Picks up phone] Where are you?

We’re in London [Pauses] Is that good enough?

Yeah, it is good enough. It depends where, though.

Romford’s not London, and you’ve started this interview with a lie, not the best start.

We get to vote on the mayor

To the good people of Romford

Congratulations on The Tick, it’s exactly what we would want as fans of The Tick in the modern age. It’s funny and dark

Have you watched all 6 episodes?

I haven’t seen it yet, I’ve had copies where the effects haven’t been finished and they’ve got watermarks all over them and captions, timecodes. I can’t wait to watch it like that. It looks pretty great, the bits that I’ve seen that have been finished, it’s got a grand scale to it, looks beautiful, I think.

It’s got the goofiness of The Tick, but also the grandness of a modern event TV series

TV is such a… what even is TV anymore? When I was growing up we had four channels that we would watch, and really as a kid there were only two options at any one time. There was never anything good on BBC Two for kids, and Channel 4, Countdown was pretty good, but apart from that, for a kid, it was slim pickings. Now, you’re choosing what you want to watch, TV is more expensive than even cinema. I’m a big Game Of Thrones fan and that episode, The Spoils Of War – Season 7 Episode 4, I think it was (I know it was, I’m a GoT-Geek) – that was more impressive, spectacular than any fantasy movie I’ve seen.

TV’s changed a lot in a short space of time

Even the idea of doing a big budget TV show for Amazon – if you said that four years ago people would have said ‘What, Amazon, do you watch it on a Kindle?’ but now, that’s what we do! That’s what I do with my kids, we sit there watching all kinds of shows on Prime Video. For the past year, the pilot of The Tick has been on Amazon Prime, so you get to see my blue backside when you put the TV on. That picture of me standing and it’s just my bum-bum in the blue suit. We’re living in crazy times.

How did you approach The Tick? Patrick Warburton’s version was quite iconic for that time. Did you watch the series at all?

I watched a bit on YouTube and I made the decision to not watch it, because I thought Patrick Warburton’s performance was so special and endearing, to me even seeing that little clip, it’s so beloved by people. I didn’t want any of that to seep into my interpretation. Ben Edlund (Creator of The Tick) wanted for it to be my own interpretation, with Ben’s guidance. I didn’t want to subconsciously be impersonatiog Patrick Warburton, particularly as he’s such a brilliant actor, and even that little clip I just thought ‘Oh god, that’s a beautiful performance, so funny, warm and touching’. I just had to make it my own thing. Maybe one day I will, I’ll give myself that pleasure. And who knows, he’s involved with the show, he might turn up in some form, who knows? We don’t know what happens. Ben Edlund’s imagination is one of a tiny number of people that I know who seem to be not of this universe. He seems to exist in a different plane, in a different dimension. My wife met him recently and she was struck by how meticulously he crafts his sentences, even in normal conversation. He can’t help but care about making these beautiful, surreal mouth sculptures. You’re in awe, and you’ve asked him ‘Where are the toilets, did you see where the toilets are?’ and his description will be surreal and florid and verbose, but never ostentatious. He’s a unique dude and I love him very much. I did feel like The Tick is Ben’s alter-ego and for Ben to entrust this character, that is the essence of Ben, to me, it’s quite an honour. I took it seriously.

The Tick Season 1 Part 1 is available now on Amazon Prime Video, with Part 2 arriving in early 2018. 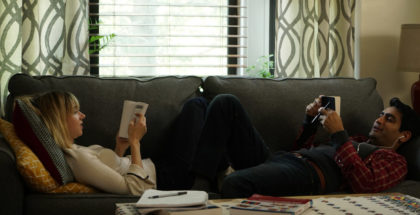