Interview: Natalie Erika James talks Relic and making a personal horror | Where to watch online in UK | How to stream legally | VODzilla.co

This weekend sees the debut of Relic, one of the year’s most profound and scary horrors. The debut feature of director Natalie Erika James, it follows Kay (Emily Mortimer) and her daughter, Sam (Bella Heathcote), as they head to their family’s decaying country home to look for their Kay’s missing elderly mother, Edna (Robyn Nevin). When Edna returns just as mysteriously, and her behaviour turns increasingly volatile, both begin to sense that an insidious presence might be taking control of her. (Read our five-star review of the film here.)

The debut feature from writer and director Natalie Erika James, the film was a hit at the Sundance Film Festival in January, when it had its world premiere. Since then, it’s premiered virtually at the London Film Festival, where we caught up online with Natalie to talk the making of a personal horror tale – and what she’s been streaming since.

This started from a very personal place for you. At what point did you realise that you wanted to explore this in film?

I started writing it on a trip that I went to go see grandmother. And I suppose it came about naturally, you know, as ideas often do, where it’s like two things that connect, and I suppose I had been thinking about her and the way that her relationship with my mother was kind of shifting over time and that dynamic of the child having to parent the parent, but also the real practical scary things about Alzheimer’s. There are moments when they’re talking to people who aren’t there, or they’re convinced someone is in a closet, or you know, like real kind of moments that make the hair stand up on the back of your neck.

Was it always going to be a horror for you?Was it difficult to externalise those things in that writing process?

In some ways, it’s the perfect compass to have when writing, because you are just drawing on real life. had a co writer on this one, Christian White. And we could always just refer back to what we both experienced it with both of our grandparents and kind of drawing from the emotional truth of that, and putting them in a very supernatural, extreme context. In some ways, it is useful, but it can be very tricky to write about something that’s still, you know, ongoing and quite painful as well. When you shoot the film, there’s just too much flying at you to really deal with that stuff, you’ve got to just put it aside, but definitely in the writing process. I think one scene in particular, when Edna’s burying the photos, it’s kind of like her last lucid moment. That was, like, just me bawling behind camera.

“We never really spoke about it like a horror film, which is strange…”

Yeah, I guess they kind of go hand in hand. I mean, it’s a really tricky character to write because you have to think about, you know, even if it’s something fantastical, you have to think about what they want. And it’s great when you work with, you know, something like vampires – blood – or demons – the soul – but this is like, you have to really come up with your own mythology. I guess we settled on something that was quite elemental, and the sense that the only thing it really wanted was to destroy and to deteriorate. So so that kind of had to be like our guiding point. And in some ways, I feel like we had a rough sense of the structure and where we wanted it to go, you know, the sense of like, the house being bigger on the inside than the outside, and these kind of spilling over into the space and decaying space as well. And I think that was kind of the starting point. And then we have these key events that Christian and I had, you know, both experienced, and it was more a matter of like, where they fit into that kind of structure. It’s quite hard to separate.

Emily, Bella and Robyn are all fantastic. How easy was it to kind of get them on board with the concept and the tone?

Robyn likes to say that she’s never seen a horror film apart from Rosemary’s Baby, which I don’t doubt! But none of them are, you know, true horror fans who actively watch horror. But they were so great. I feel like they just knew from the script, like, from my first meeting, how much it was about the emotion and we never really spoke about it like a horror film, which is strange. Particularly with something like the ending, which is almost reverent, you know. There’s a sacredness and intimacy to it, there was never any, like, doubt about, you know, whether it was tasteful or anything

It really does ramp up as well, the physicality of it at the end is really, really intense!

There’s almost humour to it, isn’t there! We start in such a grounded place. When I watched it at Sundance, I couldn’t help but laugh, but it feels so extreme, you know! 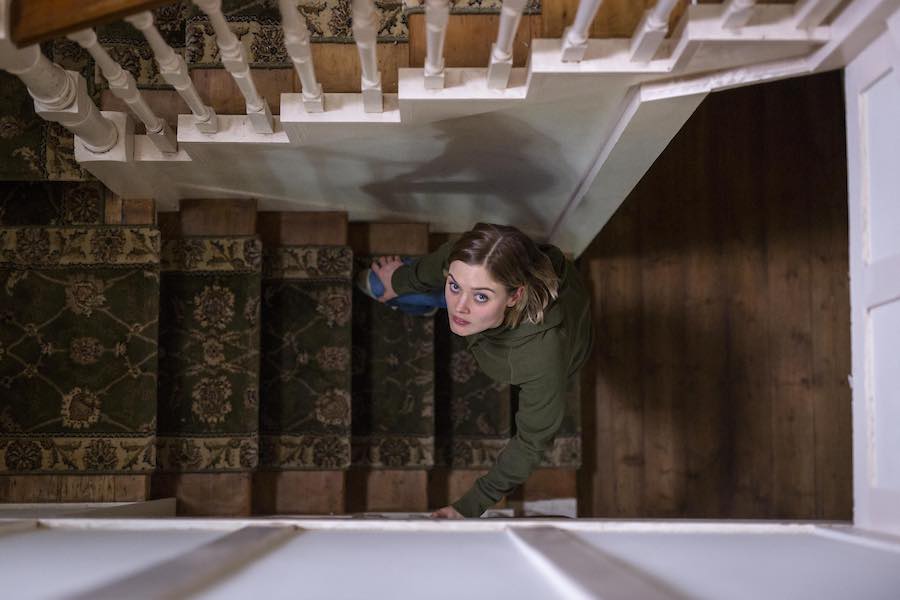 You mentioned the the house – the production design is brilliant, so atmospheric. Presumably that isn’t a real house? How did you get that location?

With great difficulty! My production designer, Steven Jones-Evans, is a bit of a genius, we actually shot at two actual houses – it took a lot of searching to find them in Melbourne. They’re not really typical Australian stone houses. So the exterior was one house and the kind of decaying grounds and the tennis court that was all, basically as it is. And the interior was another house that we had mostly downstairs, and we built the upstairs bedrooms and had to rebuild some of the hallways. And there was was kind of a modular set in the sense that we took away parts of it and made it feel like it was bigger on the inside than it was. It was much bigger, but we had to cut it down because of budget! We really wanted to create a space that didn’t feel like it was breaking from reality in a perceptible way to begin with. And so we use a lot of the same architectural language as the rest of the house. So it’s kind of more of a gradual, kind of the sense that you’re lured into it – by the time you notice something’s wrong, it’s too late.

How difficult was it to get the whole project off the ground?

I was working with some really experienced Australian producers called Carver Films. I met them straight out of film school, and they’d taken an interest in my work and we had built this relationship for a number of years. They did Snowtown and Partisan, , so they had a history of working with international partners. But that allowed me to kind of go around the festival circuit with the short and get US reps. And in some ways that opened up the doors to people like Nine Stories Productions and AGBO films. You do the whole pitch meetings and you’re kind of shopping around to a whole bunch of people and see the response. It took about four years from concept to getting on set.

That must feel like a lifetime ago – even Sundance feels years ago! In the UK, Relic premiered virtually at the London Film festival – what’s that like?

You can’t complain, because we’ve managed to squeeze in our premiere to be honest. I know that for a lot of people that had some kind of premiere virtually, I feel like you’d feel the loss of that acutely. But it has been strange, because I’ve just been doing press from my lounge room! Certainly it’s given me a lot of time to do my own writing. And in Australia, you know, all the cinemas were shut down when we were supposed to release so we ended up selling to a streaming platform.

You sold to Stan, didn’t you?

They were great – they had a very aggressive marketing campaign. I feel like so many more people saw it then if we’d released in cinemas. It’s kind of best case scenario. 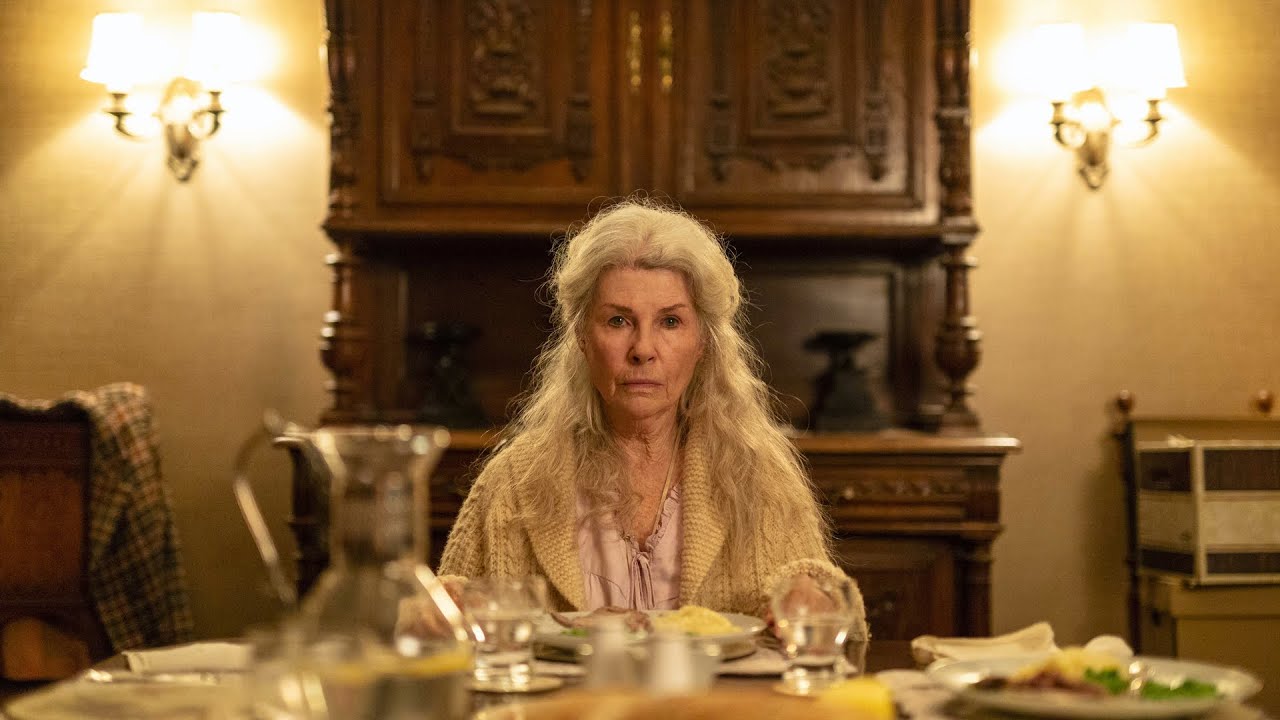 “You want people to enjoy it together, but as long as people are gonna see it, it’s all good”

You’re being released online and in cinemas on the same day in the UK – do you think of that as the best kind of balance in the current circumstances?

As a filmmaker, you always have a dream of showing in theatres, particularly a horror film where you want it to be in the darkness of cinema. You want people to enjoy it together, because there’s something about the atmosphere that adds to a horror film. But given the circumstances, it’s like, as long as people are gonna see it, it’s all good.

I haven’t been to the cinema since um, oh, my God, February. I’m heartbroken, honestly, it’s just been Melbourne has been locked down for this whole time, so we haven’t been able to open up cinemas.

What was the last thing you kind of streamed or what have you been watching during lockdown?

I’ve been watching a lot of weird, older horror films for research. Like yesterday, I watched something called The Stuff, which is 1985. That’s my weird one! I also finally got around to seeing Ali Abassi’s Border. A beautiful film, actually. Yeah, I really loved it. I tend to watch a lot of horror, I put it on as kind of comforting to me. It’s a good way to unwind! Maybe because I understand the rhythms of it or something? It’s like it’s always either comedy or horror for me these days.

If you had to recommend one horror for someone to watch before or after seeing Relic, what would it be?

Maybe like a horror comedy for after! You don’t want to go to bed depressed. Extra Ordinary sounds really good. I haven’t seen it yet.

You’ve got Stan. Do you have Shudder over there?

Yeah, we just got it. I just watched Scare Me and Spiral. Rob Savage’s Host, that was really good fun. I also saw the French film Sheitan for the first time. Honestly, some of the most eerie kind of weird sequences! I was quite amazed by the tone.

Relic is available to stream online on Shudder UK, as part of a £4.99 monthly subscription, or £49.99 yearly membership.

Where can I buy or rent Relic online in the UK?

Awkwafina and Sandra Oh to star in Netflix comedy