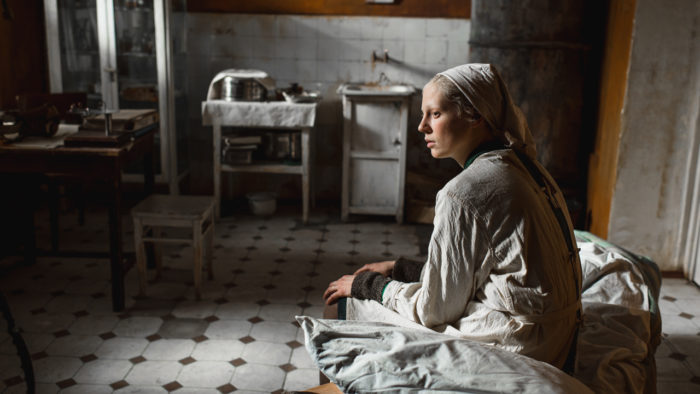 Warning: The following paragraphs contain spoilers for the opening 20 minutes of Beanpole, which contain a sequence with harrowing content.

Beanpole, the extraordinary sophomore feature of writer-director Kantemir Balagov, earned the young filmmaker the Best Director prize in Un Certain Regard at Cannes, where it also won him the FIPRESCI Prize for the section – his second in a row after Closeness in 2017. (Read our review.)

Set in Leningrad after the Second World War, it follows a number of injured or, at least, traumatised survivors attempting to restart their lives anew any way they can. Although a number of compelling characters shine in subplots, Beanpole’s central relationship is that between Iya (Viktoria Miroshnichenko), a very tall, pale and softly-spoken woman, and Masha (Vasilisa Perelygina), a smaller brunette with a more outwardly fervent personality. (Iya’s romantic feelings towards her friend allowed for Beanpole to be a rare Russian film nominated for the Queer Palm.)

Although the film shares its title with the nickname bestowed upon Iya, this is an equally balanced two-hander, although Masha is absent for most of the opening 20 minutes. The film starts with Iya working in a veterans’ hospital, where a number of her patients enjoy playing with the little boy, Pashka (Timofey Glazkov), who appears to be Iya’s son. The two seem to have a loving relationship, with Iya as a doting mother, until she has one of her regular PTSD-related fits, where she disassociates and becomes frozen in place as gasping breaths catch in her throat, while play-wrestling with the boy on the floor of their room in a crowded communal building. In a truly upsetting sequence, shown in a near-unbearable long take, Iya’s dead weight is enough to smother Pashka as he tries and fails to writhe out from underneath her unconscious body.

In the days after, Masha arrives. The pair met and became friends in an anti-aircraft unit, from which Iya was sent home after experiencing combat trauma. Masha, Pashka’s real mother, sent the boy to live with Iya when she was invalidated from duty, while she stayed fighting partly as revenge for the combat death of Pashka’s soldier father. Unhinged by the implied horrors she experienced with the Red Army and now the loss of her son, Masha, reportedly unable to conceive again, assigns Iya the task of producing another child for her as atonement.

With Beanpole now streaming on MUBI in the UK and Ireland, we speak to Balagov about the film’s inspiration and avoiding the male gaze.

You’ve previously cited one particular book on the experience of women in WWII as Beanpole’s main inspiration. What drew you to it?

The book is War’s Unwomanly Face (1985) by Svetlana Alexievich [titled The Unwomanly Face of War in a newer English translation], who received the Nobel Prize in 2015. It’s a non-fiction book with interviews with women who fought in the Second World War. And this book just blew me away and I got obsessed with this idea to make a film about the female side of living after the war.

Was that a case of adapting specific stories from the book or just using it to inspire new narrative ideas?

It’s a mix. There was one story in the book about a woman who wanted to give birth to a child to get rid of the death that she heard while she was surrounded by death at the war. That began an interest for me in the story that became the centre of the film.

Could you discuss the casting process? With the character of Iya, you were presumably looking for a very specific body type…

The most surprising thing was that Iya and Masha both came on the first day of the casting. So, from the first day, I knew that I already had my main characters and I was like, “That’s strange. Wait a minute, let’s continue.” But since that was ultimately resolved the first day of the casting, we didn’t have difficulties there. The most difficult thing was the male characters because in Russia, for me at least, I don’t see so many interesting male actors, especially young ones. But that’s just me and that’s why almost every male character in the film is played by a non-professional.

What were you looking for in casting the Masha character?

I always search for a sign of trauma in a person because the trauma is something that turns you from being part of a mass and into an individual item. That’s why I try to find unique actresses.

Beyond ‘Beanpole’ being Iya’s nickname, is the title applicable to the narrative in other ways?

The layers of meaning are different. ‘Beanpole’ is not only the height, it’s clumsiness. When you’re lost in a space, it’s ungainly. ‘Beanpole’ doesn’t just refer to Iya, it’s everyone. They’re all clumsy. After the war, they try to start a new normal life and they do it in a clumsy way.

As a male director making a film largely centred on women’s stories, was there anything you were consciously looking to avoid in terms of gaze?

No, because I believe every human being has two sides: female and male sides. And the director should be gender neutral when he makes his characters or the story or something like that. So no, with the help of my characters, I tried to discover my female side and I feel comfortable focusing on women because my first film was centred on a woman.

Could you discuss the film’s colour palette? For much of the film, Iya is regularly shown in these vivid green clothes, while Masha’s clothing leans more towards red. In the final act of the film, there is a reversal of this…

From the beginning, I felt that I should make the film in black and white. But there were three things that helped me to understand that I should use colours. First of all, from my research, like reading the personal diaries of people from those times, I found that people tried to escape the gray reality that they were living in for colourful surroundings. The second thing is that Iya has PTSD, so maybe a person who has PTSD sees the world like that; sees strong colours in that situation. And a third thing for me was that after the war, there was nullification. You were restarting a life where you were basically starting from scratch, from zero. And that’s why they’re starting to use new words, new speech and new body language, with new color in new spaces. Those are the three things that helped me to decide to use colors. Ochre in the film is trauma and rust, and the green is like hope, a new life. They’re mixing with each other.

How did that colour coding inform the location scouting and production design?

The main criteria when we were looking for locations was to find authentic original locations. And we tried to develop the colour palette and deliberately find places with those shades of green and ochre that were close to what we were trying to say. The only set that we created in a studio was the bath house because they no longer exist.

Is Iya’s specific physical manifestation of PTSD – described as ‘freezing fits’ in the film – based on something you found in your research?

Beanpole is available on MUBI UK, as part of a £9.99 monthly subscription, until 9th November.

Little Mix bring The Search to BBC One

What Disney movies and TV shows are available on DisneyLife in the UK? 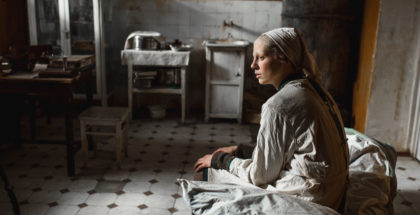