Interview: Jeremy Lovering (director of In Fear) | VODzilla.co | Where to watch online in UK

Jeremy Lovering is a scary man. The director of In Fear, out on VOD and DVD this week, he’s the kind of guy who’ll take you into the woods, wait until it’s dark, not tell you what’s going on and film you with a camera. And yet, when we interview him about his original, creepy horror film, he comes across as completely normal. Well, almost completely normal…

So, let’s start with your childhood, when your parents abandoned you in the woods. That’s what happened right? That’s why you made this film?

(Laughs) I used to love going into the woods! As a child, I used to take an air rifle and a friend and go and sleep out in the woods. I don’t know where he is actually! He’s probably still there…

If you love forests so much, why are you giving them such a bad rep with In Fear?

I’m actually a tree-hugger! I think it’s a primal fear and therefore it’s the kind of fear that most people have – even if it wasn’t something that I felt – so therefore I decided to pick on them. Forests belong to fairytales. They’re the place where primal evil lives. That’s part of it. But it’s also being lost and not knowing where you’re going, not knowing what’s out there and not being abel to trust yourself or other people… I wanted to do a home invasion movie in a car. And that became something set in the countryside.

Yeah, there’s a transition. Because we shot it chronologically, there’s a mid-point, which was after two weeks, that it became all night. It’s your expectation that night is coming. A lot is to do with anticipation and expectation. Quoting Hitchcock, when you shoot a scene, if you show the audience the bomb’s under the table, it’s their anticipation that it’s going to explode that is more valuable for tension than revealing the bomb is there halfway through. You know that night is coming and that in the night there will be bad things. You can see the light is changing – all brilliance down to grader Amy Hounsell as well – then the headlights come on, and so on. I think it’s very subconscious. Plus the unease you’ve got with these people. Do they work in pubs? Are they students? Because you don’t know you’re kind ofuneasy and they don’t know each other, so you’re asking “Is he bad?” “Is she bad?” “Are neither bad?”

And of course they’re thinking the same thing themselves…

Absolutely! I think because of the process, they didn’t know each other. Normally, with actors, you sit down and talk back-story and everyone knows everyone else’s, but I would talk with them independently. I was very clear that unless it came up in rehearsals, they weren’t to know about each other. If Ian in rehearsal said he had a sister, for example, Alice would know. It’s a small detail, but like you say, they’re finding out about each other as well as us finding out about them.

In that sense, it’s a bit like watching a first date go horribly wrong.

Yeah! I think so. I was interested in seeing if we could compress an entire relationship into one night. That kind of flirting, making things up, then “Ooo, isn’t it pretty the way they do that”, then “It’s getting on my nerves”, then you start to blame each other, then you feel guilty, then you try and claw your way back and then you’ve blown it! I also love the idea that however far advanced your relationship, at what point do you say “Yeah, I would die for them”. At this moment, they’re only two weeks in, so you’d have to be superhuman to sacrifice yourself!

It’s an interesting structure; rather than have loud bangs and easy jumps, the tension just builds without any relief. It’s not like the majority of “horror” that gets made these days.

It’s funny, I looked at 70s and 80s films because they structure didn’t do that either and kept piling stuff on – it depends on what you call horror, whether it’s Halloween or Knife in the Water, the Polanski or Carpenter way. Once it unravels, it’s going to keep unravelling. The Shining, obviously, is just relentless! That’s what I was emulating, or inspired by, rather than more contemporary horror films. I think The Ring and Let Me In do that incredibly successfully – they’re soft as a horror film, in a way, but they’re massively intense in their psychology. They’re two films I felt very unsettled by. That escalation without the false shock. I wanted it to be more in that realm than, say, Saw, or that kind of film.

Did that approach make it harder to find funding?

It actually helped because of that, bizarrely! I had an idea and I mentioned i to Big Talk and they liked it because of the process. I said: “I’m not going to give them a script, I don’t want them to know anything, I want it to be a state of fear. I want to say we’re all in fear, that leads to a state of violence, that’s a bit shit. I’m going to put these actors in fear and make them be violent. Are you interested?” Big Talk loved it, StudioCanal loved it, as long as there was the right budget level. It wasn’t Blair Witch – it wasn’t about abandoning them, it was “I’m going to fuck with them throughout” and that I would prevent it from going into an improvisation free-for-all.

You then directed The Empty Hearse in Season 3 of Sherlock. Did that come about from In fear?

We had several screenings, as you do, and Mark Gatiss came to one – I can’t remember why! I think we’ve got friends in common – and he loved it, so he said “Do you want to?” and I was like “Yes, that would be nice”. That was it really! Obviously, he knew what his Sherlock script was and I didn’t. I don’t know what it would’ve been; maybe he thought John Watson being put in the bonfire and he wanted that to be scary?

How do you find the difference between film and TV?

The gap is getting smaller, in America in particular. If you look at the kind of actors involved in TV, it’s indicative that there’s not much difference any more. In terms of the writers, that’s also true, and the directors as well. You can still talk about differences in terms of long format – for me, personally, I’m not a long series fan. I’ll watch the first season and forget to watch the rest. I like to immerse myself for an hour and a half. In that sense, that’s a difference for me. For viewers, it’s can be the opposite; immersion for 16 hours or so, which is rewarding in a different way. The production values are very high and investment is high in TV, obviously with Netflix and Amazon, who are going to increasingly dominate production. The only difference is the run-in and that’s something that will change by necessity. In film, you go into development for a long time – unlike In Fear, which was only four months from my idea to shooting it. But with TV, the scripts are more set, perhaps, once they’ve been approved by all involved. The only frustration with TV that you don’t get with film is that you’re there on the day something changes and you have to completely re-work it. With film, it’s not quite like that.

You mentioned Netflix and Amazon, do you have a streaming account at all?

I don’t, no. We have Netflix in the house but it’s not my account. That probably says more about me being a freeloader than anything!

So do you plan to work more in films for the future?

Definitely more feature film work, without a doubt. There are several possible projects I’m looking at: one is a multiple genre horror, which is not what I’d incline towards but it’s a good script. There’s another, which is a remake of an 80s film called The Changeling. It’s an amazing ghost story and it’s very psychological and a meditation on grief. There’s a comic novel I really like. And there’s a psychological drama. They’re all different.

There’s also a thriller I’m talking about, which isn’t pure genre, it’s… messed up! It’s a great script, it’s financed and it’s from a graphic novel. It’s kind of in Hindu mythology. also a thriller, also a fucked-up coma story, so it’s a lot of weird stuff going on! I’m really excited by that. That’s the perfect film for me, but it’s also one that could go hideously wrong. But there’s also a TV show, a pilot, which I’m going after because it’s a great script. It’s kind of Breaking Bad territory, black comedy, which is really funny, dark and high energy, so that would be a US TV series. I’d be looking to do the pilot rather than the whole thing.

After FrightFest last year and Sundance too, are you surprised by the reaction you’ve had? Which was more nerve-wracking?

FrightFest was more frightening, definitely. It’s 1,300 genre fans and I imagined them all walking out altogether! The only reason that didn’t make me too scared was that they’d all have to queue to go out, which would be less dramatic. But they all liked it, which was an amazing feeling.

But I showed it to a lumberjack friend and he was bored out of his mind! (Laughs) You bring your own level of fear to something; you’re not going to scare everybody. In the same way you make a comedy, some people aren’t won over by it. I think there is a level with some films that you can choose to either embrace it or grumble that it’s a waste of your money.

The thing that scares me most… is tinnitus. The ringing in your ears? That scares me more than anything! If I woke up with that, I don’t know what I’d do.

(Laughs) That would be horrible! That ghost story, which I’m writing a treatment of, everything is audio rather than visual. Think of a normal trope, like a door opening, I’ve changed that to an audio cue. Like, say, an Apple start-up noise coming on in the room next you; it’s all about sonics. The hero sees a murder from the past. In the original, it was a visualisation. Here, what I”m suggesting is a recording. So he’d hear a gun shot but he wouldn’t see it, but he’d be standing in the place where they were shot.

Did you ever see Berberian Sound Studio?

Yes, I loved it! Really good. I didn’t find it scary but I found it interesting and unsettling… You know, going back to The Ring. I’m more scared of demonic or diabolical stuff than any other thing. The psychopath in Saw I don’t find frightening, even that’s the most realistic depiction, or as a kid I found vampires frightening, but I don’t find zombies frightening…

But if someone grabbed you, took you into the woods, didn’t tell you what was going to happen and then made people jump out at you, would you be scared?

I would be scared, yes! When Alice’s character was grabbed, it was the most terrifying moment. Ian went into shock, it was brilliant. We were like “Oh, he’s forgotten he was acting! Quick, get him a blanket and a cup of tea!” and I was like “Right, we going again.”

In Fear is available to watch online on Amazon Prime Video as part of a Prime membership or a £5.99 monthly subscription.

To find out where you can watch In Fear on pay-per-view VOD, click here. 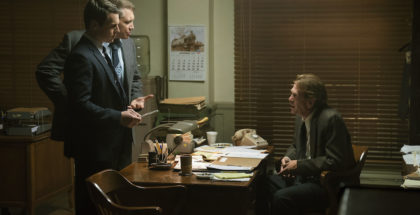