Interview: Eugène Green talks The Son of Joseph, compositions and the Dardenne brothers | Where to watch online in UK | How to stream legally | When it is available on digital | VODzilla.co

Interview: Eugène Green talks The Son of Joseph, compositions and the Dardenne brothers 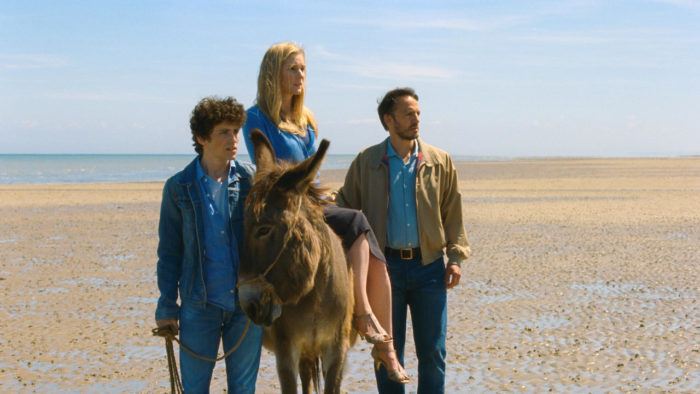 Though only a few of his films have received UK distribution (see 2009’s The Portuguese Nun), US-born, France-based director Eugène Green has accrued a significant arthouse fanbase across the world, via a steady run of eccentric dramas, each driven by a rigid commitment to Baroque theatre techniques. No one behaves quite like a human being in his filmography, but their humanity shines through the mannered delivery.

Although still reliant on that same performance style, Green’s more overtly comedic new film, The Son of Joseph, offers a considerably more accessible, playful distillation of his filmmaking. It’s a beguiling riff on the Nativity story, as a young boy (Victor Ezenfis) becomes determined to uncover the identity of his absent father. His search leads to Mathieu Amalric’s brash publisher, who offers limited appeal when it comes to being a proposed patriarch. As such, Vincent’s attentions gravitate towards the publisher’s brother (Fabrizio Rongione) as a more suitable substitute, only for a funny farce of misplaced paternity to ensue from there.

With the film released in UK cinemas this Friday, ahead of a Christmas Day streaming debut on MUBI UK, we chat with Green about his direction of actors and collaborating with producers Jean-Pierre and Luc Dardenne.

At this stage in your career, are big names like Mathieu Amalric and Maria de Medeiros tending to approach you? How does your general casting process work?

Well, I always choose the actors. Mathieu, I had already worked with once, and I know he likes my films and I appreciate him very much as an actor. And Maria, I had never worked with her before – I had seen her in a lot of things, acting in French and Portuguese. So same as with all my actors; there’s no difference whether they’re very well known or not.

With the general performance style across your films, is there ever room for the actors to experiment a little bit with their performances, or is it very strictly laid out for them?

Is there ever a case where people new to the process struggle a bit early on, maybe trying to veer into a more physically farcical direction?

No, well, they know what they’re coming into. For example, any actor but particularly actors like Mathieu who does a lot of films, there can be some spontaneous thing which I don’t like, so I just tell him. And he does it as I would like it.

Could you tell me a little bit about the Dardenne brothers’ involvement as producers and how they came on board?

Well, it’s not the first time. They had already co-produced Le Monde Vivant, my second film. They like my cinema very much and it’s reciprocal. And that sometimes surprises people, but actually they have, also, a very personal language, which is something I appreciate. I never can manage to write films where there’s no cinema in them; there is just these images used to tell a story. They have their own specific language. In France, their films are often considered ‘social’ films – they concern people who are marginal. But there’s another dimension, which, for me, makes them much more interesting. There’s a spiritual dimension always, and actually, there are always religious references but they’re more hidden than in my films. So they were very happy to co-produce my film and they liked it very much.

On the basis of The Son of Joseph, if there is some sort of shared connection between you three as filmmakers, would it be that subtler kind of religious referencing? Just out of curiosity, do you think there are any other filmmakers doing a similar thing like that?

In France, I think the other greatest French-speaking director living is Bruno Dumont, and with his films there is also a spiritual aspect. And actually there is always a Christian aspect, although he denies it often. I think he also has his own very personal style. His last film, I don’t know if you’ve seen, Ma Loute… it’s a rather strange film. Part of it is somewhat like his other films and the part with the most well-known actors is very strange.

Could you talk me through how you generally go about composing a frame?

I think when I write a script, I see the frame in my head. Well, of course, I take into consideration the preceding frame and the succeeding frame. But in a general way for me, a frame is a concentration of energy within minutes, so what is important, besides the way you light the subject, is what you put within the frame and also what you put outside of the frame. And certainly in my frames, what you don’t see is almost more important than what you will see. And so it’s also a question of degrees of intensity, since, in my films, often the most important moments are dialogue scenes. And I always film the dialogues in a way where you always see the person who is speaking; they’re always shot and reverse shot. So it’s very important to think about the value there is to wider or more narrow subjects, so usually, there’s this sort of progression and then it goes out again – sometimes you see the two characters and then it starts again with shots over the shoulder and then cameras between them, and then it gets closer and closer.

The Son of Joseph is not currently available on UK VOD. Read our review here.