This month saw the premiere of Romantic Comedy, a documentary from Elizabeth Sankey, one half of the pop duo Summer Camp. Part love letter to the genre and part video essay, it’s a fascinating and insightful tour through the humble rom-com’s history. (Read our review here.)

Most-loved romcoms are torn apart and scrutinised for their unrealistic pictures of male-female relationships and white, heterosexual, middle-class characters. Why does the woman always have to be saved by a man? And what makes the genre so formative in our lives?

We interview Sankey to talk about representation in rom-coms, getting rid of the phrase “guilty pleasure” and keeping entertained in lockdown.

You were involved in Beyond Clueless, a documentary about high school movies. Was that part of the inspiration behind making a film focused on another under-appreciated genre?

I think it was more that Beyond Clueless made me realise that a long-form essay film was possible. I wasn’t someone who watches dissections of films or genres on YouTube, etc. (although I now know there are some brilliant ones out there), so my only awareness of this as a form was from Charlie Shackleton’s work. And actually I’d say that after I’d asked Charlie’s permission to rip him off(!), I tried really hard to make my essay film different from his movies (as much as you can make something that is directly inspired by another film you’ve also worked on “different”). That’s part of why I wanted to narrate it myself, and have other voices discussing the films and in general be more overt in terms of openly referencing specific movies and moments/scenes in the voiceover.

Has directing a film always been something you wanted to do?

It’s funny, I trained as an actress but never got anywhere with it, but it was always something that I thought I wanted to do, even when we were full-time with our band, Summer Camp. And then I started making Romantic Comedy pretty much as an accompaniment to our next album. I didn’t really think about it too much before I started and I had no idea what I was getting myself into.

However in making it I completely fell in love with the process of writing movies – even though it’s a doc I like to think it has a narrative arc – and it made me realise that a big part of why I never made it as an actress is because I’m a snob and control freak who loves films and wants to be part of them, but I’m far more suited to directing and writing than acting.

Are you already thinking about your next movie?

I’m developing some film and TV projects and am also spending lockdown making my next essay film. It’s currently at the fun stage where it’s a hot mess and I’m positive it’s going to be absolutely terrible.

Summer Camp provide the soundtrack for this – did that make the editing process more enjoyable, and help with crafting thenarrative? Did the music come together at the same time as the script?

It’s always really enjoyable to edit to songs, especially when the films you’re using for clips feature people like Hugh Grant, Rock Hudson and Angela Bassett. So yeah, I loved that. We were writing the songs as I was making the film. At the beginning of the process I talked to my bandmate (and composer, and husband) Jeremy about the montages I wanted to have in the film, and then we came up with the concepts for those songs together. So I wrote the lyrics based on what would be happening in those montages, for example there’s a song about manic pixie dream girls called Women In Love which is my attempt to reclaim that term as something positive, as it seems to have become a quick way to dismiss certain types of female characters in films.

“I had about a year of solidly watching rom-coms”

How many films did you watch in total to find the ones you wanted to feature? And how long did that overall process, from interviewing and researching to compiling, take?

From start to end the process took about two years. I was watching the films as I edited them so I could grab clips without having to make notes and worry about time codes. So yeah, I had about a year of solidly watching rom-coms. I remember on a good day I would get three done. But also these were films I’d watched many, many times so I knew them well. And in general rom-coms stick to such a specific arc that you know what to look out for – kissing, declarations of love, meet cutes, weddings. I still got emotional while watching them even though I was editing though. I cried a lot at my desk.

Were there any surprise discoveries along the way you would recommend to others alongside When Harry Met Sally or While You Were Sleeping?

I really recommend all the screwballs from the 1930s and 40s. And in general I want everyone to be more familiar with Marilyn Monroe’s work. I’d seen a lot of her films before I made Romantic Comedy, but watching so many of them in succession – and then also seeing the doc about her – made me realise how incredible and unique a performer she was. I really think the world of cinema and the way it portrays women would be very different if she’d lived. Others I love are Alice Wu’s incredible debut Saving Face, Just Wright, Appropriate Behaviour and Ruby Sparks! Do people know about Ruby Sparks? Zoe Kazan, man.

Were there any clips you couldn’t fit in that you were disappointed to lose?

Not clips but there are films I’m gutted I didn’t put in. I re-watched Sydney Pollack’s Sabrina this week and couldn’t believe I forgot to put it in my doc.

The lack of talking heads is really effective, but having other people’s voices and perspectives in the narration is an inspired decision in itself – was that part of the aim from the beginning?

At first it was going to just be me talking but then I realised I could only speak about these films from a very specific, narrow perspective. Both as a white, straight, privileged woman, and also as someone who is really nothing more than a fan. So then I reached out to people who I knew were more knowledgeable than me on the subject, came from different backgrounds and experiences, and also were just funnier and smarter.

You talk in the film about becoming slightly disenchanted with the rom-com genre as you grew up, especially after marrying Jeremy – was there a film that won you over again?

The process of talking to the contributors was really what did it. At first I was so eager to rip into the films and talk about how ridiculous they can be, but then in every interview there would be moments where the contributors talked about feeling so moved by a specific scene, or of how a certain movie resonated deeply with them at some point in their lives. I think that made me realise how powerful this genre can be. I also realised I had a lot of internalised misogyny about my love of rom-coms. I felt that as someone who cares a lot about “cinema”, and as a feminist, I couldn’t possibly be OK with my infatuation with such a fickle, and to be honest, extremely feminine genre. I’ve done a complete 180 on that now and it bugs me when I see people talk about rom-coms as guilty pleasures or feel the need to add a caveat to their appreciation of these movies. Horror and action films are just as frivolous – if not more – but we don’t feel the need to excuse or hide the pleasure we feel at watching those.

The film’s been released on MUBI at a time when more and more people are turning to streaming services for entertainment. What’s your view of streaming platforms within the modern film landscape? Was a MUBI (or similar online) release always part of the plan?

We feel so lucky to be working with MUBI, as it’s a platform I and my producers (Oskar Pimlott, Chiara Ventura and Jeremy Warmsley) all think is brilliant and deeply respect. In general streaming platforms seem to be very positive in terms of bringing lots of different types of films to a wider audience and making them so much more accessible. It also means there are now many more ways for films to be funded, supported, and ultimately get made. Diversity in this industry is so important and it’s great to feel like it’s getting a bit easier for that to happen. However, as someone who is used to going to the cinema twice a week, I would be very, very sad if we ever lost that experience.

And finally, what are you streaming in lockdown at the moment?

I’m finding my attention span isn’t great in lockdown so I’ve been doing a lot of rewatches this week including Pulp Fiction, Love And Mercy – my husband is currently obsessed with The Beach Boys, Gone Girl and Step Brothers. I also watched The Assistant – so brilliant.

Romantic Comedy is available on MUBI UK, as part of a £9.99 monthly subscription.

Romantic Comedy is available on MUBI UK, as part of a £9.99 monthly subscription, until 7th June 2020.

Don’t go breaking my heart: The lessons we learnt from rom-coms 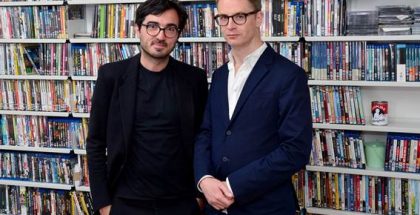 MUBI to premiere The Happiest Day in the Life of Olli Maki at London Film Festiv... September 7, 2016 | Staff Reporter