YouTube tightens monetisation rules | Where to watch online in UK | How to stream legally | When it is available on digital | VODzilla.co

YouTube is tightening its criteria for video monetisation, as the site responds to advertiser concerns with manual reviews of top videos.

A week ago, the video giant cut business ties with prominent vlogger Logan Paul, after he posted a video showing a suicide victim, earning revenue from the post. After the video was deleted, Paul posted again to apologise for his original video, and this was also reportedly monetised. YouTube later announced that he had been removed from its Google Preferred scheme, YouTube’s top-tier earning platform, and that the video was against the site’s terms and conditions.

Now, YouTube is adding in new restrictions for those who can monetise videos, as well as join Google Preferred. YouTube will now only allow creators to join the YouTube Partner Program, which earns money from adverts, if they have racked up 4,000 hours of watch-time in the last 12 months, and 1,000 subscribers. That’s a significant hike from the previous threshold of 10,000 views, which didn’t provide enough of a barrier to weed out spammers or other bogus creators.

YouTube will also manually review all videos in its Google Preferred scheme (comprising the 5 per cent of most-viewed channels), which it hopes will reassure advertisers that their messages won’t be displayed within disturbing, offensive or inappropriate videos. A three-rung measure of suitability will also allow advertisers to select their level of comfort with content to advertise alongside.

YouTube said that the moves are not a direct response to Logan Paul’s video, but the controversial video highlighted the holes in the video giant’s system, as it tries to straddle the boundary between social network and media company – a balancing act that court advertisers without fully regulating the content on its site or take responsiblity for it.

“These higher standards will also help us prevent potentially inappropriate videos from monetizing which can hurt revenue for everyone,” chief product officer Neal Mohan and chief business officer Robert Kyncl said on Tuesday.

By tightening up its criteria, YouTube is also making the amount of content it has to manually review smaller, hoping to reduce the risk of other single videos affecting its reputation. The result will be a blow to smaller creators, as they have to wait until they get to a certain size to make any revenue, but will also help YouTube to retain advertisers, after a year in which companies boycotted the site over terrorist videos and other inappropriate content. Variety, however, notes that YouTube still saw the number of channels earning more than $100,000 annually rise 40 per cent year-on-year in 2017.

YouTube’s new Partner Program requirements will come into force retroactively from 20th February, which means any channels with fewer than 4,000 hours of watch-time in the last 12 months and fewer than 1,000 subscribers will no longer be able to run adverts. According to YouTube, 99 per cent of existing creators affected by the changes make less than $100 per year. 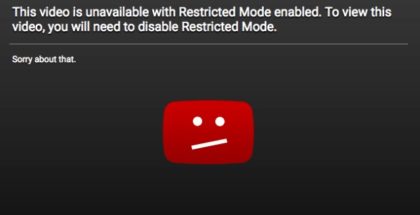