Vic & Bob return for another Big Night Out on BBC Four | VODzilla.co | Where to watch online in UK | How to stream

Vic & Bob return for another Big Night Out on BBC Four 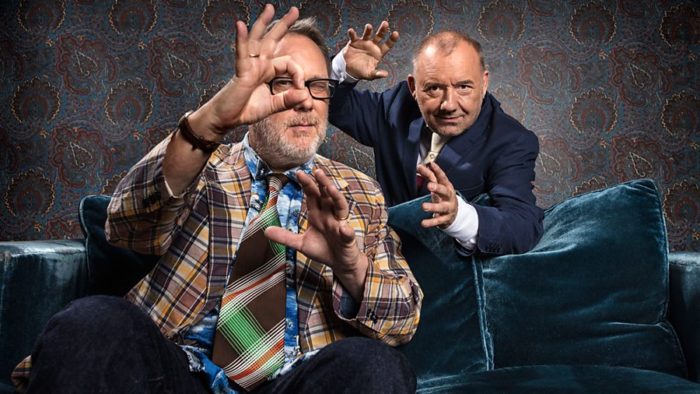 Vic Reeves and Bob Mortimer are bringing another blast of high octane comedy to BBC Four with a second season of Big Night Out.

The studio-based show will burst into life with special effects, songs, stunts and plenty of surprises. During their time off screen, Bob has been working hard on his musical dance routines and can’t wait to impress Vic and the audience with his latest skills.
Novelty Island will be back as well as fan favourite Judge Nutmeg, who once again presides over the Wheel of Justice. There will also be the return of hit sketches The Free Runners and Mostly UnHaunted, alongside a host of new characters and guest stars.

The legendary comedy duo will be joined once again by hapless Vaun (Vaun Earl Norman), who still doesn’t have a clue what’s going on… and probably never will. Following a highly successful series last year marking their 25th anniversary at the BBC, the pair proved they still have the skill to surprise and delight audiences with their unique brand of surreal humour.

Vic & Bob’s Big Night Out is a reimagining of the original Vic Reeves’ Big Night Out. First broadcast in 1990 it was a maverick and very silly stage show, which which transferred to television and introduced the world to the comedy duo.

Vic and Bob say: “We’ve had so much fun writing this series, the chemistry between us has never been so explosive and we can’t wait to get going – for our writing to make it on screen and see how it all works out.”

Shane Allen, Controller Comedy Commissioning, says: “Vic and Bob continue to pioneer, dazzle and reduce audiences to helpless laughter. Who knows what inventive brilliance is in store, it’s not like the scripts will give us much of a clue. They return at the height of their comedy powers with more audience love than ever.”

Cassian Harrison, Channel Editor BBC Four, adds: “I am overjoyed to welcome back Vic and Bob to BBC Four. Their big night out was a must-see moment on the channel last year and we’re looking forward to even more of their inimitable anarchy.”
Vic & Bob’s Big Night Out is a BBC Studios production for BBC Four. The producer is Lisa Clark, the executive producer is Ben Caudell, the studio director is Mat Whitecross. The Commissioning Editor for the BBC is Alex Moody.
TX details will be confirmed in due course.