Three Eyed Raven: Game of Thrones Season 5 teaser lands | VODzilla.co | Where to watch online in UK | How to stream

The Game of Thrones Season 5 teasers have started to arrive online – and Melisandre’s ominous words to Arya Stark are right at the centre of them.

The site asks for either a user’s mobile number or Twitter username to send them “The Sight”. Upon entering a number, users are told: ‘By submitting your mobile phone number, you consent to receive up to 15 text messages on the phone number you provided from Home Box Office, Inc.”

Up to 15 messages? These teasers are set to continue for some time until the usual array of full trailers arrive.

What is actually in the clip, though, is the most intriguing thing of all: Arya Stark (Maisie Williams) has nothing to do with the Three Eyed Raven, which is connected to her brother, Bran (Isaac Hempstead-Wright). Bran, meanwhile, is thought not to be in the new season at all, as the increasingly big show begins to branch out to focus on specific story lines, and waits for George R. R. Martin to continue Bran’s story on the page now that his on-screen subplot has caught up with the books.

What does it all mean? Only another 14 messages to go until we find out.

Not caught up with Westeros yet? Here’s where you can watch Game of Thrones online in the UK. 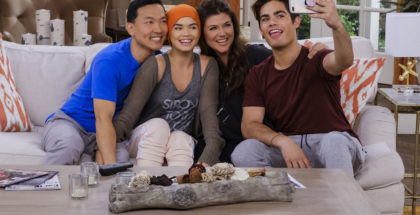 Netflix buttons coming to a remote control near you... April 3, 2015 | Staff Reporter