Silent Night: Looking back at early screen adaptations of A Christmas Carol | Where to watch online in UK | How to stream legally | When it is available on digital | VODzilla.co

Silent Night: Looking back at early screen adaptations of A Christmas Carol 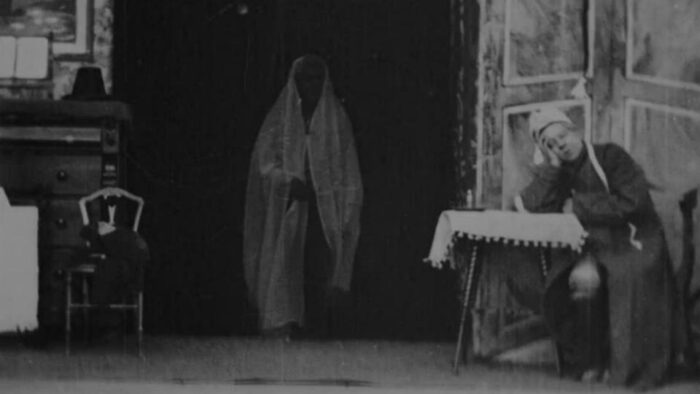 When it comes to Christmas, it sometimes seems all anyone wants to hear is about is Scrooge. Scrooge, Scrooge, Scrooge. If you’re looking for a fresh take on Charles Dickens’ A Christmas Carol, then silent films are the place to head, with several interpretations on the classic festive tale dating back to the early 1900s. They don’t have The Muppets or Michael Caine, but they do have innovation aplenty.

Old Ebenezer’s appeared in more than 90 movies over the last 100 odd years (effectively one movie per year). And, if you believe the Zenith Film Company, Seymour Hicks starred in all of them. “As played by Seymour Hicks for over 2000 performances!” boasts the opening titles to 1913’s Scrooge, directed by Leedham Bantock. Hats off to Zenith Film Company, they certainly knew how to cash in on a theatre sensation. In the Dotheboys Hall of life, Zenith Film Company were the boy dancing on the table clutching his newly-obtained headwear.

Hicks’ Scrooge is a masterclass in hammy acting. From his gibbering mouth and elaborate make-up to his wobbling knees and darting eyes, he makes The Muppet Christmas Carol look like melodrama. He even gets extra scenes not in the book to prove how grumpy and miserly he is, dismissing a poor woman with a baby and snubbing a mayor who looks strangely like Boris Johnson.

Compare it to 1914’s A Christmas Carol (tellingly not titled after its lead character) and the latter is a far subtler piece. But it’s interesting to see the difference in effects – not least in the presentation of the ghosts who visit Scrooge.

Harold Shaw’s production – available on BFI Player for free – has Scrooge taken out into the world by the spirits via the magic of double exposure. He is transformed into a faded spectre, wandering the streets of other people’s existence before returning back to his bed via a closed door and, still superimposed, lying down on top of himself and sleeping.

This is the kind of trickery we expect from an on-screen Scrooge adventure and can even be found in 1901’s Scrooge, or Marley’s Ghost (also available on BFI Player for free).

In Bantock’s approach, on the other hand, we stay inside Scrooge’s home. The ghosts visit him, faintly appearing behind his fully-formed flesh, while he gesticulates at thin air and begs them for forgiveness. The wonder of the spirits is at work, the film seems to say, but dammit, this is Seymour’s show. Is it a lack of money that forces such constraints? Is it an artistic decision to adopt Scrooge’s perspective? Is it something stipulated by Seymour Hicks so the world gets a better chance to admire his eyebrows?

That’s the one thing you do learn from early Dickens adaptations: no matter how old the film, Ebenezer Scrooge’s eyebrows can never be too big.