Classic Doctor Who on BritBox: The evolution of the Cybermen | VODzilla.co | Where to watch online in UK

Classic Doctor Who on BritBox: The evolution of the Cybermen

Offering 626 Doctor Who episodes broadcast between 1963 and 1996, BritBox is bigger on the inside. If you’ve watched all of the new series already, join us as we turn on the TARDIS randomiser for a monthly primer on the adventures of the first eight Doctors…

Warning: This feature contains spoilers for Season 12 of Doctor Who, up to but not including the finale (broadcast on 1st March 2020).

Like several seasons of New Who in recent years, Jodie Whittaker’s second run as The Doctor reaches its explosive finale tonight with The Timeless Children. As we saw in last week’s Ascension of the Cybermen, the cyborgs are on the march and the Doctor is trying to fend off an army of old enemies as they hunt for the last few humans alive.

After bringing the Daleks back during the first run, Russell T Davies brought the Doctor’s second most-famous monsters back in 2006’s Rise of the Cybermen, which created a new origin story for them on a parallel Earth. They’ve since reappeared in several stories, especially in Steven Moffat’s era, during which they racked up one story per season, culminating in the peerless World Enough and Time/The Doctor Falls two-parter.

As for Season 12, Episode 9 was notable for including a few new models of Cyberman, ranging from the partly-converted Ashad – or “the Cyber-Zealot”, as he’s been billed in some behind-the-scenes materials – the disembodied Cyberdrones, and a new warrior class that emerges from storage in the climactic scenes. This continues a tradition that has seen their designs evolve since they were first created in 1966, despite their characters symbolising a logical endpoint to any kind of evolution or development.

Likewise, writers have used the Cybermen in different ways, either building upon or diverging from the concerns about artificial augmentation that inspired creators Kit Pedler and Gerry Davis. Looking back at the history of Cybermen via the classic serials available on BritBox, you can see them evolve from converters to conquerors to, er… “social workers”.

As those who’ve seen 2017’s Twice Upon a Time might remember, the Cybermen made their debut in the First Doctor’s swansong, The Tenth Planet, in which they tip up at a South Pole research base in the far-off year of 1986. Originally, they come from a long-lost twin planet of Earth called Mondas, where humans have systematically enhanced themselves by replacing organs with mechanical components and removed all emotions in the process. This model of Cyberman would next be seen in World Enough and Time, with subsequent models from the 1960s favouring metal helmets over the (far scarier) outpatient chic.

What to watch: The Tenth Planet (Season 4, 1966) including an animated final episode.

Riffing on The Mummy and other monster movies, The Tomb of the Cybermen finds an archaeological expedition searching for the cyborgs’ remains on the planet Telos, five centuries after they supposedly went extinct. The Second Doctor, Jamie and Victoria tag along and uncover a small army of Cybermen in cold storage. As well as introducing the roving Cybermats and a Cyber-Controller, the serial is also notable as one of the only complete Patrick Troughton stories still available today.

A trip to St Paul’s 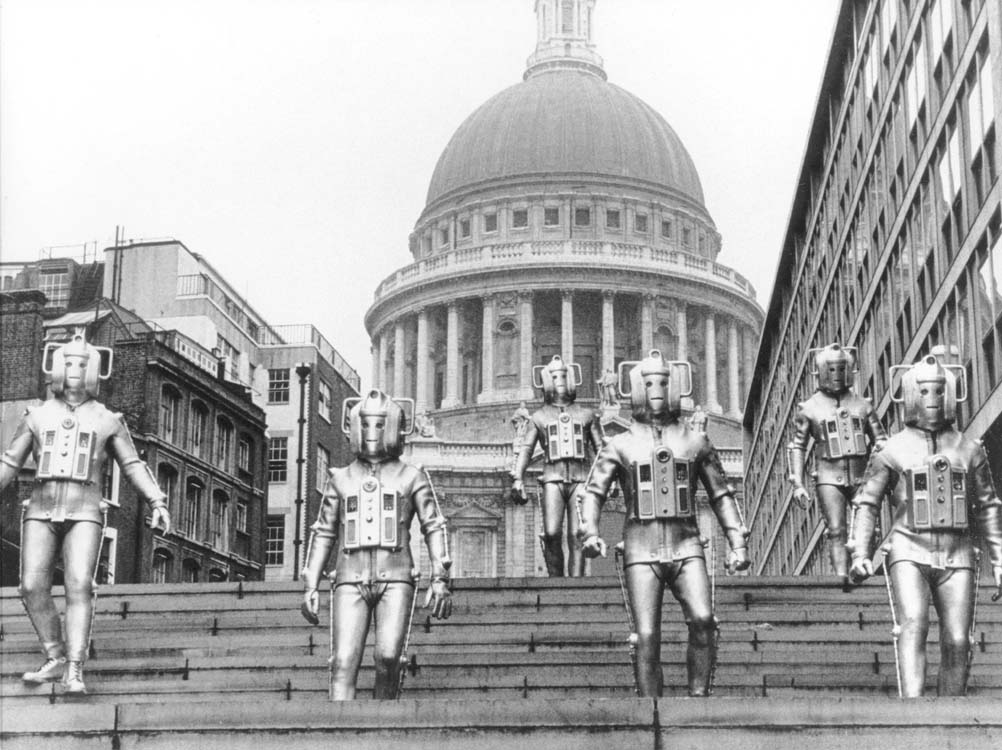 The other landmark Cyberman serial of the Second Doctor’s era is The Invasion, which also doubles as an origin story for UNIT. Allied with tech giant International Electromatics, the Cybermen plan to subjugate contemporary Earth, while Brigadier Alistair Lethbridge-Stewart (Nicholas Courtney) leads a taskforce dedicated to stopping them. The serial’s most iconic image comes from a location shoot where the shiny new Cybermen marched down the steps in front of St Paul’s Cathedral, a sight that the Twelfth Doctor’s era gleefully replicated with new Cybermen during the cliffhanger of 2014’s Dark Water.

What to watch: The Invasion (Season 6, 1969) including animated versions of Episodes 1 and 4.

With the transition from black-and-white to colour TV, producers favoured more colourful monsters over the Cybermen during the Third Doctor era, but they came back with a vengeance at the end of the Fourth Doctor’s first season. Serving as a prequel to The Ark In Space, Revenge Of The Cybermen reintroduces the villains as conquerors, as they launch an attack on the golden planet of Voga in the aftermath of a Cyber-War. Although the story also introduces a new, more snake-like variation of Cybermat, it doesn’t exactly cover the baddies in glory by positing gold as their Achilles heel.

What to watch: Revenge Of The Cybermen, (Season 12, 1974) – but if you haven’t seen The Ark In Space, watch that first/instead. 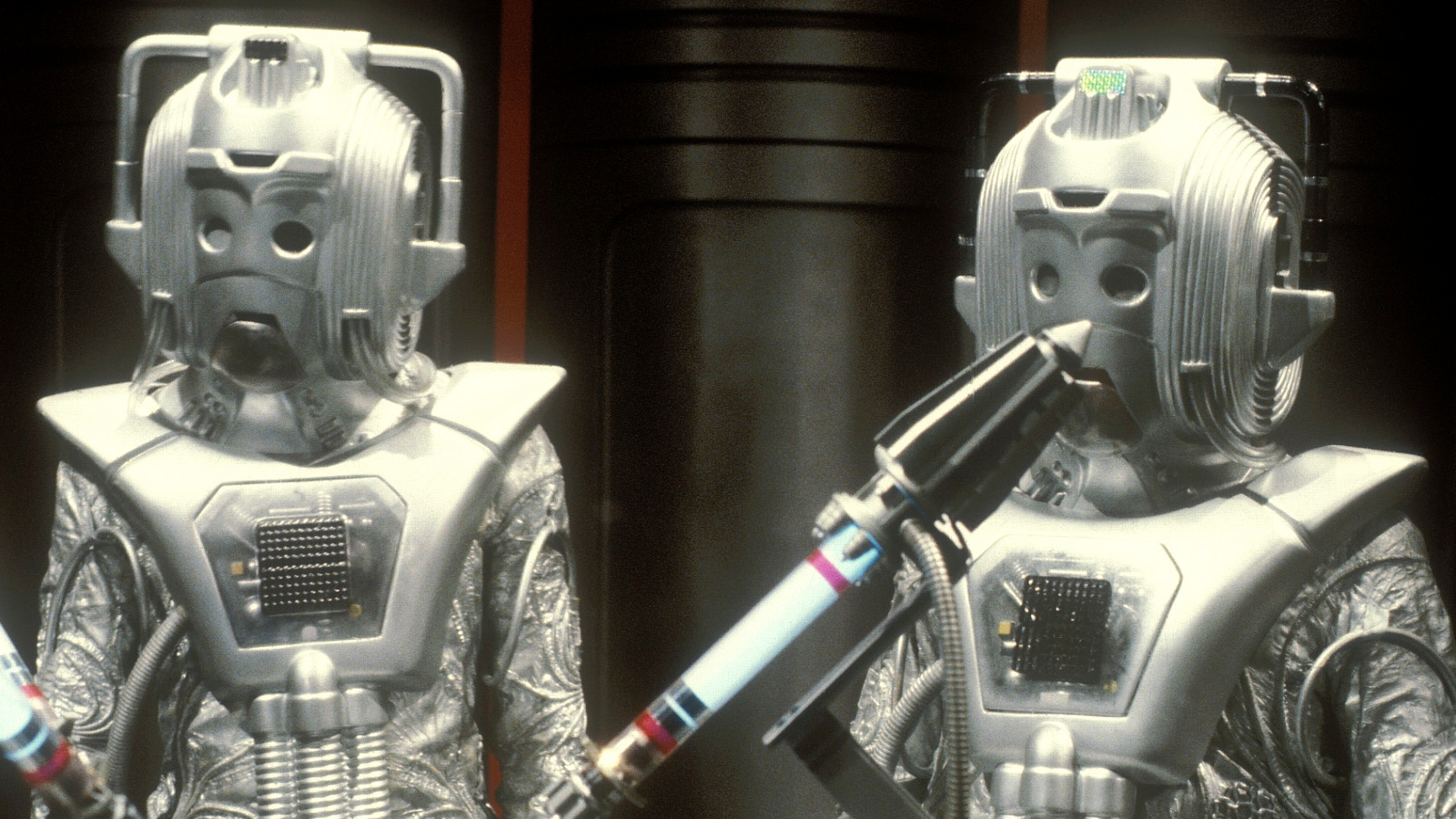 After an even longer break of almost 7 years, the surprise emergence of the Cybermen at the end of Earthshock Part One is heralded as a watershed moment for Doctor Who in the 1980s. In the fateful confrontation that follows, the Fifth Doctor and his companions struggle to the last moment to prevent the Cybermen from changing history, with their plan to destroy Earth before it can host the signing of a military pact against them in the future. This dark, monumental serial is widely considered to be one of the very best of the classic series.

Fans have observed that Chris Chibnall’s approach to the Cybermen in the current season is most influenced by what writer Eric Saward did in Earthshock and Attack of the Cybermen. This Sixth Doctor serial reaches further back into the series’ history, though, with past elements such as Telos, Mondas and former Dalek mercenary Lytton figuring into an audacious plot involving Halley’s Comet. Foreshadowing the new series, this also marked the debut of the Season 22 format of serials comprising two 45-minute episodes, although it lacks the stronger pacing of New Who’s two-parters.

Under the stewardship of script editor Andrew Cartmel, Doctor Who became politically and thematically richer without losing touch with the target audience. That said, Silver Nemesis is an unusually underwritten representation of Thatcher’s Britain, as well as a warmed-over remake of the infinitely superior Remembrance of the Daleks from the same 25th-anniversary season. In one bizarre moment, two skinheads interrupt the Cybermen’s hunt for a Gallifreyan living metal to ask if they’re social workers, right before they’re summarily dispatched by the metal meanies.

If you’re a Cyber-completist, here are a few more adventures to check out. The Second Doctor had scrapes with the Cybermen in The Moonbase (Season 4, 1967) and The Wheel In Space, (Season 5, 1968), which are both examples of the time-tested “base under siege” story. As mentioned, the Third Doctor never faced his silver nemeses on screen, but his full-colour era did include a brief cameo for one of them in Carnival of Monsters (Season 10, 1973).

Finally, the Cybermen were among the various monsters dropped into Gallifrey’s Death Zone in The Five Doctors (Season 20, 1983). There, they tangled with the Fifth Doctor and Anthony Ainley’s Master, so check that out if you want to see how the Doctor and the Master have fared against them on their home planet in a previous adventure…

Classic Doctor Who is available on BritBox as part of a £5.99 monthly subscription. 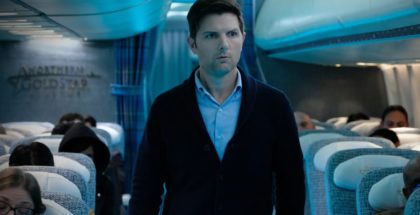