New releases and coming soon to MUBI UK this week (6th February 2016) | VODzilla.co | Where to watch online in UK

This week marks another global exclusive for MUBI, as it premieres a rediscovered Dennis Hopper documentary online, while the service also joins in My French Film Festival.

MUBI pays tribute to the late Jacques Rivette with the addition of this playful treat, which follows fresh-out-of-prison Marie and paranoid Baptiste, as they roam Paris in search of a mysterious briefcase.

If you like video games, this behind-the-scenes look at the passion, pain and persistence of independent developers working on now familiar titles such as Fez and Super Meat Boy is an insightful, interesting and incredibly engaging take on computer gaming culture.

As the Rotterdam Film Festival holds a retrospective of Spanish director Pere Portabella, MUBI lines up its own double-bill – starting with Cuadecuc, Vampir, a horror film that is, on the face of it, about the making of a horror film. Shot entirely on the set of Jesus Franco’s 1972 film, starring Christopher Lee and Herbert Lom, this is subversive, political, bizarre and unique.

Part two of MUBI’s Portabella double-bill, this 1989 film charts the political state of Europe in the late 1980s, a mix of new social classes and lingering history.

The second part of Quentin Tarantino’s revenge flick may not be as stylish as the first, but it packs a gritty Western punch – not least because of the performance by David Carradine as our titular villain, whose relationship with Uma Thurman’s Bride is filled with surprisingly understated emotion. ‎Daryl Hannah brings the violence as the one-eyed Elle Driver.

Humphrey Bogart has rare been better than in Nicholas Ray’s In a Lonely Place, which sees a screenwriter accused of murder until his neighbour clears him. But is she right? Classic Hollywood noir.

You can re-watch Ben Stiller’s crazy comedy about a male model brainwashed to assassinate the Malasyian Prime Minister any time and find more treats hidden in the pile. Proving Stiller’s talents as a capable helmer for goofy as well as sinister material, Zoolander seems like a silly character film from the outset, but with a script so insanely sharp, yet willing to go off on tangents for bigger laughs, the end result has become a cult classic. Read our full review.

Remember when Robert De Niro used to make good movies? You’d have to go back 40 years to find Taxi Driver, an anniversary that MUBI celebrates by adding Martin Scorsese’s classic to their line-up. Bobby stars as Travis Bickle, an unstable Vietnam war veteran working as cabbie in New York, where the sleazy nightlife drives him to try and save a young prostitute (Jodie Foster). Scorsese’s iconic tracking shot highlights the violence of Bickle’s mind, but it’s Bernard Herrmann’s soundtrack that gives the film its power, as a mournful sax sings notes of false romance and redemption – and true alienation.

As My French Film Festival returns for its sixth year, MUBI joins in with the release of All About Them, which follows a young couple who buy a house – but unbeknownst to Micha, Charlotte has been cheating on him with Melodie. And unbenknowst to Charlotte, Micha is also cheating on her… with Melodie.

As Luca Guadagnino’s A Bigger Splash arrives in UK cinemas, MUBI takes us back to his 2009 film, I Am Love, which stars Tilda Swinton as a mother of three who left Russia to live with her husband in Italy – only to find her attention aroused by the friend of her son.

A global exclusive for MUBI, this rediscovered documentary captures Dennis Hopper at the height of his success in the wake of Easy Rider. Shifting between an insightful document of a complex artist and a self-reflective exploration of vérité filmmaking tropes, the movie finds the pathologically rebellious actor as an unlikely King of Hollywood for a day. (Hopper’s follow-up work, The Last Movie (1971), found him drifting further and further into eccentricity.)
Available until: 12th March

A subscription to MUBI costs £4.99 a month. For more information, head to www.mubi.com 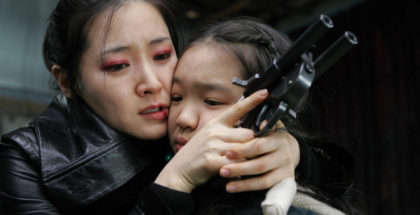