Catch up TV reviews: Jericho, Derren Brown: Pushed to the Edge, Crashing | VODzilla.co | Where to watch online in UK

Derren Brown: Pushed to the Edge (All 4)

Several decades ago, Stanley Milgram found that under certain conditions, people were prepared to electrocute someone else, if they were ordered to do so. This week, Derren Brown tried to prove the power of social conformity once again with an audaciously engineered deception designed to convince someone to push a guy off a building. Read our full review.

It’s hard to know what to expect from a TV show called Jericho. A good old-fashioned English pastoral drama? Or something a little more exotic? The truth is a bit of both.

ITV’s drama follows the goings-on in a small town in Yorkshire in the 1800s, as people try to build a viaduct between two railways. But before that, we meet the recently-widowed Annie (Jessica Raine), who ups sticks and moves from her home with her children to the frontier between the north and the south. It’s an artsy start to what seems like a costumed character piece – until we see the sprawling town set, full of flirty workers and overseen by questionable rich types.

The end result is Made in Dagenham meets There Will Be Blood; Downton meets Deadwood. It all looks a little too pristine to be convincing, but there’s too much plot to let you pause to think about that: in the first episode alone, we have several deaths, a big explosion and her hot lodger (Hans Matheson) and naive son are caught up in it all. The arrival of a new foreman, played by The Wire’s Clarke Peter, promises more intrigue. It’s hard to know what to expect from the ensuing seven episodes, but you can say one thing in favour of ITV’s drama: it’s certainly different.

Hot on the heels of Crashing and Not Safe for Work comes the latest hip Channel 4 sitcom, this one following a bunch of young adults living in a hospital. Why? Because they’re property guardians: legal squatters who occupy disused buildings in exchange for cheap rent.

Our group are a typically motley gang, from the shy Fred (Amit Shah) to French artist Melody (Julie Dray) and rude estate agent Sam (Jonathan Bailey). They’re not particularly likeable – although you do feel sorry for Colin (Adrian Scarborough), who is swiftly bullied around by Melody – although they are all incredibly attractive and cool.

Our central characters are Anthony and Kate (Damien Molony and Louise Ford), who are happily engaged – until the arrival of his old friend, Lulu (Phoebe Waller-Bridge, who also wrote the script). The jokes fly thick and fast, but most of them aren’t exactly hilarious – the setting of a gigantic party only adds to the sitcom’s very familiar feel. But Waller-Bridge as a performer is electric to watch and she and Molony have decent chemistry, so their will-they-won’t-they relationship (complete with banter and ukelele) is fun to behold. Hopefully, the funny will come later too. 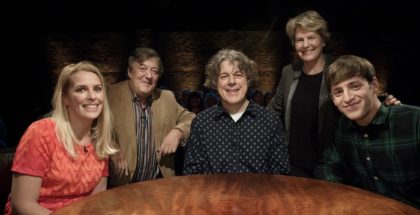