Walter Presents first look TV review: Case | Where to watch online in UK | How to stream legally | When it is available on digital | VODzilla.co

This thrillingly unconventional Iceland series is a case worth cracking.

Trapped whipped into British living rooms with a gripping frost last year, thanks to the BBC, and now, we’re about to get a second wind, courtesy of Walter Presents. The source? Case (Réttur), which premieres on Channel 4 tonight before being released as a full box set online. The show has all the signs of a Nordic Noir hit: a suspicious death, a determined cop, a dodgy lawyer, and some nasty goings-on just waiting to be exposed. But Case grabs your attention precisely because it doesn’t follow any of those conventions. This is bleaker, rawer and all the better for it.

That becomes immediately apparent as we discover the dead body of ballet dancer Lara in Reykjavik’s National Theatre. With no lengthy build up or hand-holding introduction, we’re faced with the corpse as soon as detective Gabriela claps eyes on it – a brilliantly blunt (and brutal) statement of intent. Bickering with her partner, Hogni, Gabriela (a marvellously unfussy Steinunn Ólína Þorsteinsdóttir) might sound like the usual kind of dogged protagonist Scandi TV serves up, but there’s no glamour here, no awe-inspiring intuition or even a hugely traumatic backstory.

That comes courtesy of another key player, Logi (a mercurial Magnús Jónsson), who wanders into the fray with a beard almost as big as his alcohol problem. A washed-up lawyer, even his past takes its time to be addressed; what we know, for sure, is that he’s not above illegal methods of obtaining evidence, blabbing to the press or sneaking about in other people’s homes.

“You’re still the same pathetic loser,” declares Brynhildur (Jóhanna Vigdís Arnardóttir), his old partner, when they bump into each other mid-investigation. She, it turns out, is friends with Lara’s parents and is asked to poke her own nose into events.

For Icelandic viewers, the reunion of the pair is a big deal: they were two parts of a trio of lawyers in The Court, the country’s first legal drama from several years ago. But even for Brits coming new to their relationship, we learn all we need to from their bitter greeting of each other – a sign of just how comfortable they are inhabiting these characters.

An unglamorous cop and two frenemies with no instant exposition about what went wrong? That’s par for the course for Case’s intelligent script, which doesn’t pause to pander to anyone watching: if you don’t pay attention, you’ll soon lose track of how everyone’s connected, and even if you do, the show is happy to leave that complicated web to untangle at its own speed.

It’s a bracing way to begin a series, but that doesn’t deter you from watching, because Case is too busy unravelling what promises to be a horrific conspiracy of dark, dark crimes. A sleazy boy at school is already unsettling, thanks to the show’s unflinching depiction of some candid bedroom scenes, but he’s set to be only the start of a seedy underbelly in this seemingly civil community – and our unwitting, unfriendly trio are just the kind of people to delve into these depths, whether through Gabriela’s conviction that Lara didn’t kill herself or through Logi’s dubious ethics.

At the helm sits director Baldvin Zophoníasson, of Trapped, who once again displays his knack for making the glacial gripping. But what’s striking is the way he shoots so many of these scenes in the daytime, with bright light and open spaces only reinforcing the shadowy shocks that await – most notably in the silhouetted figures who stand in big-windowed offices and whisper of secrets they want kept out of the media. “What?” “I hear things…” comes the ominous reply.

The result is a show that has all the patience of The Killing and all the emotional nuance of Broadchurch, but delivers the goods in the most unconventional manner possible. Even Logi, with his haunted eyes and hairy chin, is no doubt striving for some form of redemption, but there’s little indication that he’ll ever get it: Case resolutely refuses to play the usual ball games. It’s too busy frowning to play ball. It’s little surprise that Homeland’s Howard Gordon has already picked the show up for a US remake. No matter how many terms Iceland has for snow, if the country keeps producing series at this rate, we’re going to have to start coming up with more words for fantastic TV. Case is definitely worth cracking.

Case premieres at 10pm on Channel 4, with all episodes available to stream after its broadcast exclusively (and for free) on All 4’s Walter Presents .

2017 Oscar nominees – where to watch them online in the UK 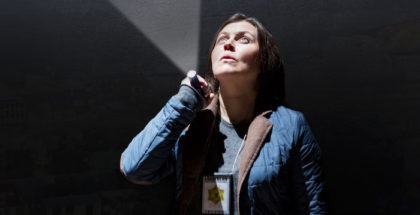