VOD review: Game of Thrones Season 4 Episode 7 | Where to watch online in UK | How to stream legally | When it is available on digital | VODzilla.co

“Hello, cousin Robin, I’m building a Snow Winterfell,” greets Sansa. “What’s a Winter-hell?” asks sweet Robin. “My old home, I’ll probably never see it again because it got burned down,” replies Sansa. “Ah,” interjects young Robert. “It probably got burnt down because it doesn’t have a Moon Door. It’s where you can make people fly. Your enemies, people who break the law, traitors and people you don’t like the smell of.”

Petyr “Littlefinger” Baelish (Aiden Gillen), the Mockingbird of the title, is in Episode 7 for a surprisingly short time – but that doesn’t lessen his impact on the episode. The accent is still a bit ropey, but Aiden Gillen is currently getting away with it because he is furthering the show’s plot in a very dramatic manner.

His first jaw-dropping moment is when he kisses Sansa. This seems like it might have been a misstep, and the fact that his wife, Lysa, witnessed it, made it perhaps even more so. Baelish’s one constant obsession are his feelings toward Catelyn Stark, but the Tully daughters are nothing alike. Cat is fierce, stubborn, determined, loyal and strong. Lysa? Jealous, isolated, petulant, wreckless and weak. Lysa’s fits and rants are brilliantly portrayed by Kate Dickie, while Gillen’s thinly-veiled affection is nothing compared to the admiration he has for her sister. Perhaps he feels that that Sansa is a preferable substitute? Even after that kiss, though, we still have no idea of his intentions towards her, even though she is not unfairly described by Lysa as an “empty-headed child”.

Sansa (Sophie Turner), who has been imprisoned some way or another for 3 seasons, might actually be dragging herself out of self-pity. All her life she has been taught to be passive, accommodating, pleasing – this is how she survived King’s Landing – but perhaps she’s not far from snapping. We see a glimpse of this when she slaps the spoilt, insensitive Robert (Lino Facioli) in frustration. She may yet make a good diplomat or schemer, but Turner does well with one of the less interesting characters in the book.

Meanwhile, in the capital, Jaime (Nikolaj Coster-Waldau) and Tyrion (Peter Dinklage) discuss the dwarf’s impending trial by combat. As yet, Tyrion has no champion, and with no sign of Bronn, no prospect of one either. Jaime somewhat reluctantly declines to defend Tyrion; although both Lannisters relish the upset it would cause their father, left-handed, it wouldn’t even be a contest. It emerges that Cersei’s champion will be The Hound’s oft spoken of (and seldom seen) brother, Gregor “The Mountain” Clegane (Hafþór Júlíus Björnsson), a giant muscly rock of a man.

Where’s Bronn? Jerome Flynn’s sellsword has a new patron, one who isn’t imprisoned and has ready access to money. Well-dressed and looking forward to a noble marriage, it becomes apparent that Brobn has no intention of facing The Mountain – they’re called “sellswords” for a reason, you know. While still loyal, in his own way, Bronn fires back at Tyrion after he requests help once more: “When have you ever risked your life for me?”

For Tyrion, fortunately, help comes from an altogether unexpected direction: Cersei’s naming of The Mountain provides Oberyn Martell an opportunity to avenge his beloved sister. Do we trust him? Tyrion certainly has a decent rapport with Pedro Pascal’s charismatically dangerous rogue.

Away from King’s Landing, Danaerys (Emilia Clarke) finally tells Daario Naharis (Michiel Huisman) to get his clothes off, much to Jorah Mormont’s (Iain Glen) disgust. Her current plan is to retake Yunkai, and brutally execute any of the surviving slave masters. Mormont advises her that this will make her no better than the masters she so despises. Will she go through with it or risk losing Yunkai immediately after retaking it? And will Daario take his clothes off?

Meanwhile, Arya (Maisy Williams) and The Hound (Rory McCann) stumble across a burned-down house with a survivor with a gut wound, slowly dying and The Hound shows the dying man mercy. The pair of them are resigned to a truce, since both are aware that the best place for Arya to be is the Vale with her aunt, although Arya still harbours a desire to head for Braavos. Some more of Arya’s acquaintances, the brutal Rorge and Biter, show up. Biter lives up to his name, taking a chunk out of The Hound’s neck – and it’s looking pretty nasty.

The happiest moment, though, comes when Brienne (Gwendoline Christie) and Podrick (Daniel Portman) have a chance encounter with one of Arya’s old friends from Yoren’s band of recruits: Hot Pie. He takes great delight in explaining the intricacies of baking do a rather indifferent Brienne. (“No gravy, no pie.”)

She possibly unwisely reveals that they are looking for Sansa Stark. Hot Pie recounts his time with Arya, who, to Brienne’s knowledge, had not been seen since before Ned Stark’s execution. Podrick, in an uncharacteristically useful bit of insight, suggests that The Hound is probably taking her to Lysa – an interesting deviation from the book, where Brienne just ends up trudging aimlessly around the Riverland for a bit. She now has some insight: it will be interesting to see where this might take her.

With storylines condensed neatly and characters moving forwards across Westeros, Episode 7 of Season 4 pounds along nicely. The title may be misleading, only giving 15 minutes to its eponymous bird, but make no mistake: it has a shocker of an ending. As Baelish knows only too well, you can’t make pies without gravy.

Where you can stream Game of Thrones online? For more information, click here. 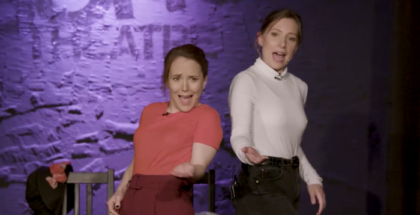