VOD film review: Werewolves Within | VODzilla.co | Where to watch online in UK | How to stream 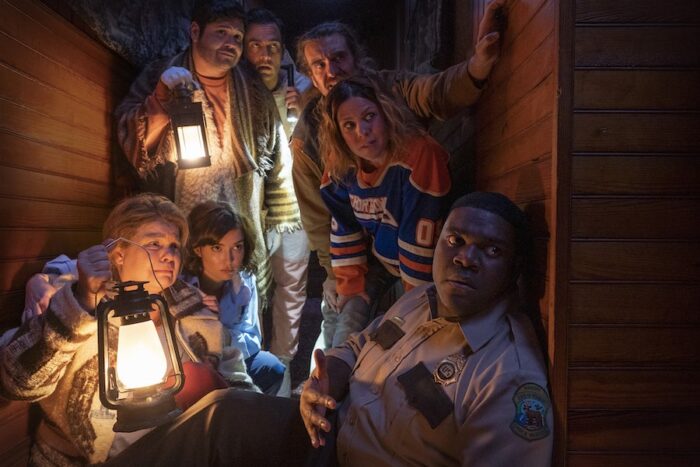 Allegory for a divided nation

Werewolves Within opens with a text quote on screen, phrase by phrase, all to the sonic accompaniment of a portentous howling wind and strident musical glissandi. “Listening is where love begins,” it reads. “Listening to ourselves/and then/our neighbors.” Finally, with an ominous crash on the soundtrack, the origin of the quote is revealed. Yet it is not Edgar Allen Poe, or HP Lovecraft, or Friedrich Nietzsche, or the Book of Revelations, or any of the other usual go-to sources for doomy genre-prefacing citations, but rather Mr Rogers, the homely, affable children’s TV presenter whose show Mister Rogers’ Neighborhood delivered wholesome bromides about community values to enchanted pre-schoolers for more than three decades. This is the first of many subversive jokes in Josh Ruben’s Werewolves Within whose screenplay, by the aptly named Mishna Wolff, offers wild comedy under the guise of horror.

In fact, community values will prove key to the Werewolves Within. For as Finn Wheeler (Sam Richardson) arrives in the tiny town of Beaverfield to take up his job as the new forest ranger, he will find a divided ensemble of eccentrics all at one another’s throats – and that is before someone or something starts taking them out one by one during a snowstorm that cuts off all communications to the outside world.

There is goofy mail-person Cecily (Milana Vayntrub), a single manic pixie dream girl also relatively new in town and happy to show lovesick Finn around the local freakshow. There is the hospitable hotelier Jeanine (Catherine Curtin), who believes that her husband Dave (Patrick M Walsh) left her a month ago to move to Belize with his lover – although we know better, thanks to a prologue which half-showed his grisly fate. There is the reclusive scientist Dr Ellis (Rebecca Henderson), who is in Beaverfield to assess the environmental impact of a proposed oil pipeline. There is the curtain-twitching, God-fearing Trisha (Michaela Watkins) and her philandering husband, Pete (Michael Chernus). There is the dumb-assed redneck mechanic Gwen (Sarah Burns) and her Rumsfeld-quoting partner, Marcus (George Basil), who cannot wait to sell up and leave. There is rich gay couple Joaquim (Harvey Guillén) and Devon (Cheyenne Jackson), who have moved to this impoverished backwater for its picturesque woodlands and do not see how ill-fittingly privileged their liberalism is here. There is extreme libertarian Emerson (Glenn Fleshler), a wild huntsman (dressed in a wolfskin) who lives alone out on the perimeter of town and wants absolutely nothing to do with his neighbours. And then there is oil man Sam (Wayne Duvall), who is in town to sell his pipeline and is happy to sow fear and loathing to get his way.

When good-natured Finn – whose very considerateness marks him as an outsider – finds himself holed up with the rest of the townsfolk in Jeanine’s hotel while something circles for the kill, he asks if anyone has a gun, only to discover that almost everybody is packing. In other words, Beaverfield is a microcosm of a heavily armed, deeply polarised nation, where anger and hostility are combustible forces, where divisions are easily manipulated by vested interests, and where everyone is everyone else’s (not to mention their own) worst enemy. This is Trump’s America writ small, a wolf in sheep’s clothing primed to consume itself from within – and the qualities of niceness and neighbourliness that Finn shares with one or two other Beaverfield denizens might just prove the silver bullet to bring down the town’s – and the country’s – ingrained monstrousness.

That is to assume, of course, that Finn is not himself an undercover lycanthrope. For as the body count rises, Werewolves Within plays out more as a chaotic murder mystery than a monster movie, with everyone a suspect and motives legion. Based on the multiplayer VR game from Ubisoft (albeit without the medieval setting), but drawing equally from films such as Jonathan Lynn’s Clue (1985) and Rian Johnson’s Knives Out (2019), Ruben’s second feature (after 2020’s Scare Me) lets its cast of crazies run riot, all shouting – and shooting – over one another in a hilarious bedlam of crossed purposes, conflicting aspirations and escalating micro-aggressions. There seems to be a werewolf, and it could be anyone – but as paranoia takes hold and selfishness kicks in, the townspeople prove incapable of making a coherent, collective stand against a very real (if perhaps nebulous) threat, and end up doing its work for it.

A barely hidden allegory can be discerned here of a world beleaguered by, yet in denial of, the effects of global warming. For Beaverfield is, after all, expressly conflicted over issues of fossil fuels and the environment, and the werewolf (whose very existence is called into question) is only one of several deadly problems, all unleashed in parallel, that these mismatched neighbours are facing. Meanwhile, the film is populated with fully-formed, unpredictable characters and peppered with fast-and-witty curveball lines, all of which capture the contradictions of the American community. Ruben’s film will keep you guessing – and laughing – to its ultraviolent end, as its biting message is concealed beneath a warm coat of charm.

Uprising review: A powerful portrait of tragedy and legacy