VOD film review: The Death of Louis XIV | VODzilla.co | Where to watch online in UK 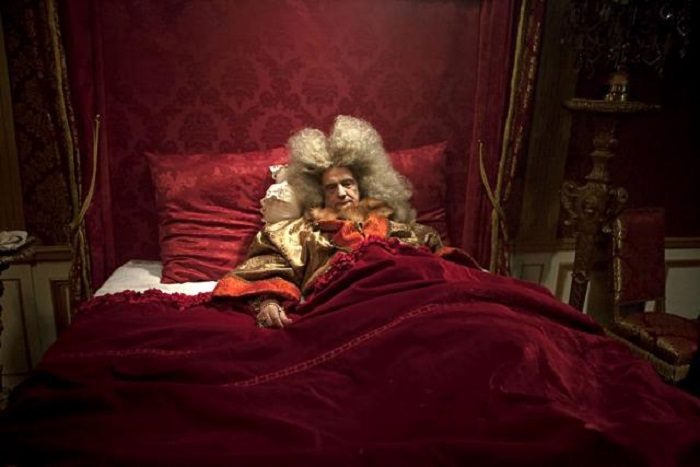 An elegiac look at the grandly mundane demise of Europe's longest reigning monarch.

Albert Serra’s The Death of Louis XIV opens with attendants wheeling the King through Versailles’ beautiful grounds. He has been injured while hunting, the light is fading, its crepuscular strength only able to light the vivid colours of nature as deep shades of purple, green and red. Cinematographer Jonathan Ricquebourg makes excellent use of such naturalistic lighting – dwindling twilight, candles and dimly lit rooms of heavy Royal fabrics – trying to approach Louis XIV with a self-reflexive realism, while simultaneously foreshadowing the end of his prosperous 72-year reign. The result is essentially a chamber piece with a deliberate avoidance of typical period drama. It’s grim, peaceful and painful, a quiet, visual dirge to witness the mortality of a divine king and contemplate our own gazing mortal bodies in the process.

Death is supposedly the great leveller (“nous sommes tous égaux devant la mort”), and director Albert Serra explores this aphorism in the extreme. The Death of Louis XIV is a self-explanatory title for a film that, given the naturally dramatic potential of its subject matter, is extremely self-restrained. There are no flashbacks to Louis le Grand, the Sun King, in his prime, ruling France and warring in Europe with an iron fist. There’s no The Man in the Iron Mask silliness, nor explanatory exposition of his former life, no grand cinematic shots of Versailles. Serra’s slow cinema has no room for such indulgences; the narrative is kept economically to the month leading up to the death of the king, his bodily presence always felt, even when the camera occasionally wanders. We are always in the presence of Louis, privacy being a modern notion and alien to the French Court, where le corps de Louis is ever divine and must always be attended to and celebrated, even when his body is failing.

Serra’s film is as much about the nature of cinema and historical veracity as it is about death. His narrative is based on historical evidence – the memoirs of Saint-Simon, the Marquis of de Dangeau and the court’s daily records of Louis’ health. In the language of pop culture, period dramas have long been the storytelling method for implied (though spurious) historical verisimilitude, the costumes and language of centuries gone by often pastiched with accidental anachronisms, coupled with 20th/21st century cinematic logic of film and narrative.

Sofia Coppola’s way of avoiding such tired cliché in Marie Antoinette was to film Versailles and her heroine through a pastel, candy-covered filter – a post-modern world of MTV aesthetics and post-punk sound that made explicit the impossibility of objective historical storytelling, while bringing a modern audience closer to her subject matter. Serra takes a very different, yet similarly ingenious, approach to his historical figure, firstly through an attempt to be as historically accurate as possible, but, as if to illustrate the impossibility of such authenticity, his film ties its cinematic logic to the reigning visual medium of the day: portraiture. Still shots that last far longer than filmgoers are accustomed to – an obsessive centring of Louis XIV and his effects, close-ups of what a servant or a doctor is doing witnessed like an inspection of the details of a painting. A party may be happening in the same room, or an orchestra playing next door, but the camera ignores such spectacles, focusing almost entirely on the king.

It’s fitting, as Louis XIV used his patronage of artists (such as Pierre Mignard, whose darker colours Ricquebourg mimics) to manifest his image as the divine Sun King, so perfectly embodied here by Jean-Pierre Lèaud (The 400 Blows). The film lives and dies by its physical portrayal of Louis; little is said, or explained, and Léaud has to communicate so much, while near-silent and bedridden. He does so incredibly, and it’s hard to imagine anyone else pulling this mean feat off. Through gestures, a blink, his stony, impenetrable countenance, we gradually gather a picture of a Grand Monarch dying slowly and publicly- on one of his better days, we witness the ladies of Versailles showering adoration and praise on him, for being able to swallow a few mouthfuls of dinner. It’s a bizarre moment and Lèaud plays it perfectly – his visage as the Sun King is endlessly fascinating and his imperial presence is still palpable, even as he drools and falters.

Serra gives us much time to reflect on this, a recognisable image of palliative care and mortal decline in the man who consolidated absolute monarchy, rotting away from gangrene.

It’s an entirely preventable death, but none of the pre-modern king’s doctors dare to suggest his leg should be amputated. They document everything and attend to Louis with devotion, although their care ultimately amounts to hoping the gangrene will go away – even letting an almost comical Tartuffe-like figure try to cure the king with his own brand of snake oil. It’s testament to how much the King’s body is entwined with the state; a body politic dictat means a life-saving limb removal might be a treacherous dismemberment and an attack on France. After he has passed, one of the king’s doctors remarks that they must do better next time. It’s a rationalist, empirical attitude, ready to welcome modern thought – an acknowledgement that Europe will never see a monarch like the Sun King again.

The Death of Louis XIV is now available in UK cinemas and on Curzon Home Cinema.