VOD film review: Synecdoche New York | Where to watch online in UK | How to stream legally | When it is available on digital | VODzilla.co

Charlie Kaufman's deconstruction of human existence through the construct of theatre is dense, difficult and delightful.

Charlie Kaufman is the most original writer in modern cinema. His directorial debut, Synecdoche New York, is a typical blend of reality, surreality, meta-surreality and neuroticism. But after a string of unconventional literary masterpieces, Kaufman has come up with something so mind-boggling in its ambition that there’s barely any point in trying to sum it up. But here goes.

Meet Caden Cotard (Hoffman). Caden is a theatre director. Living up to his surname, he genuinely thinks he’s dying – obscure diseases, skin infections, brain malfunctions, he’s got them all. Miserably married to successful artist Adele (Keener), Caden’s life is a perpetual chain of failure, loss and illness; while his production of Death of a Salesman goes well, his family falls to pieces. “I fantasise about him dying,” admits his wife in therapy. Awfully funny though it is in Keener’s hands, the truth is that so does he.

Can Caden achieve anything of worth with his life? Can art ever represent the true nature of reality? After his wife leaves for Berlin, taking with her his daughter, Olive, Caden gets the chance to find out. He receives the ‘genius grant’, an unlimited amount of money to fund an artist’s production of something big and meaningful. For Caden, that’s a simulacrum of his own life spanning an entire warehouse; a synecdoche of New York and of himself. He’s helped along by his assistant, Hazel (Morton), who lives in a house that is perpetually burning down. Together, they construct an artistic anti-reality, or a dramatised hyper-reality, in which everyone Caden knows or has met is a character acted by an actor, including himself.

As relationships evolve on set and off, the cast begin switching identities; eventually, a woman is playing Caden and Caden’s a cleaner, vacuuming Adele’s Berlin apartment. Growing in scale and vision, Kaufman’s concept contorts to create a bewildering ball of timey-wimey emotional disappointment. The cast do well to keep up, but Hoffman excels in an impossible performance – Caden’s logic-defying existence is hard enough to comprehend, let alone convey. The actor’s ability to turn any part into a fully-fledged person, though, knocks down any intellectual obstacles, leading an ensemble (supported by Morton’s wonderful cat-like chemistry with a confident Keener) who make sure every moment connects, tickling funny bones and tugging heart strings.

The production design is equally immense. As the background is filled with layers upon layers, the Russian doll screen becomes a hive of activity that demands repeat viewings just to appreciate all the visual gags.

Charlie Kaufman is the most original writer in modern cinema. But a director too? Synecdoche’s brilliance is almost too convoluted. Like Michel Gondry’s solo effort, The Science of Sleep, perhaps Kaufman needs a creative partner to achieve perfection. But there’s the rub, for this would remove the core of the piece; at its heart, this is Kaufman’s most personal exploration not just of the human condition, but his own mind. An arc without a narrative, Synecdoche New York is a poignant project that leaves your brain buzzing and your heart throbbing. It’s flawed. But isn’t everything?

Synecdoche New York is available to watch online on Amazon Prime Video as part of a Prime membership or a £5.99 monthly subscription.

Where can I buy or rent Synecdoche New York online in the UK? 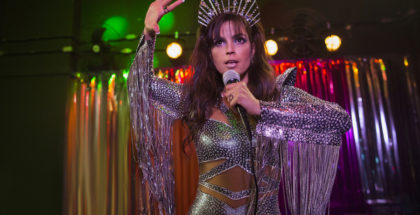