VOD film review: Stations of the Cross | VODzilla.co | Where to watch online in UK

Directed by Dietrich Bruggeman, Stations of the Cross (Kreuzweg, original title fans) is divided into 14 lengthy single-take scenes, or chapters, each of which is named after the titular stations depicting Christ’s route to the Crucifixion. Newcomer Lea van Acken plays 14-year-old Maria, whose family belong to a strict Catholic sect and whose 4-year-old brother, Johannes (Linus Fluhr), has not yet started to speak.

In the opening scene, Maria listens intently as Father Weber (Florian Stetter) gives instruction on the concept of self-sacrifice, before asking, ominously, why God would allow an innocent young child to become gravely ill and whether the idea of self-sacrifice can apply to a whole life. At the end of the lesson, Maria reaches for a biscuit and Father Weber remarks “I see a potential sacrifice there”, which sets Maria on a dangerous course of starvation and deprivation (she also refuses warm clothing) in the hopes of “saving” her younger brother.

Further complications ensue when Maria befriends a classmate, Christian (Moritz Knapp), who asks her to join his church choir. Maria instinctively knows that her fundamentalist mother (Weisz) wouldn’t approve of her friendship with a boy, so she pretends that a female friend has asked her instead. However, this only makes her feel even more guilty for lying, although her mother angrily refuses the request anyway, once she discovers that the choir in question sometimes sing gospel and soul music, which she considers to have satanic influences.

Newcomer Lea van Acken delivers a heart-breaking debut as Maria, whose unwavering devotion to her family is extremely touching; it’s clear that even though her mother is ridiculously hard on her, Maria loves her and knows that the situation with Johannes is making her miserable, so her quest is as much about restoring her mother’s happiness as it is about her brother. Weisz and Knapp are equally effective in their roles and there’s strong support from Lucie Aron as French au pair Bernadette, who provides a sympathetic ear to Maria’s problems.

Bruggemann’s formal rigour is assured throughout (the camera only moves three times in the entire film) and it’s impossible not to marvel at the young actors reciting reams of dialogue in each single shot, just as it’s impossible not to wonder how many retakes they had to do on each scene. This also gives the film both a formal and thematic link to Faith, the second film in Ulrich Seidl’s Paradise trilogy.

Intriguingly, rather than present a straight-up polemic against religious extremism, the script (which Bruggemann co-wrote with his sister, Anna) refuses to take a side, so the end result is both challenging and thought-provoking, regardless of whether you hold religious beliefs. It also makes a powerful statement about cultural pressure, since this can also be seen as a story about a young girl with an eating disorder. Fortunately, Bruggemann is careful to include notes of humour, such as one scene in gym class where Maria refuses to dance to “satanic” pop music, or a charming sequence where Maria and Christian are working on math problems.

This is a strikingly directed and superbly acted drama that’s by turns disturbing and genuinely moving.

Stations of the Cross is available on BBC iPlayer until 6th April 2020.

Where can I buy or rent Stations of the Cross online in the UK? 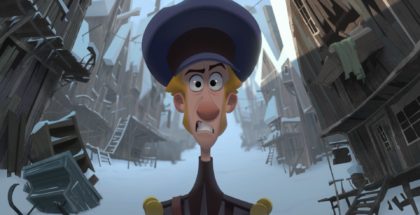