Vin Diesel and David Twohy reunite for a satisfying slice of B-movie action, but lose what made their antihero worth cheering.

“Don’t know how many times I’ve been crossed off the list and left for dead. So this ain’t nothing new.”

It took years for Riddick to get made. A pet project of Vin Diesel, he fought for funding with director David Twohy to return to his most interesting character: a killer with the ability to see in the dark and the ruthless instinct to make the most of it. The duo had already tried to give him a franchise, expanding upon the world introduced by Pitch Black in the messy The Chronicles of Riddick. Now, though, they scale things back down for the simply-titled Riddick. Stranded on a planet. Hunted by a group of humans. Trapped between them and a race of nasty aliens. Yep, it ain’t nothing new.

It takes Twohy less than 5 minutes to rid himself of our protagonist’s last adventure and set up a leaner, lower budget story, more in keeping with the first film. In fact, this is almost a retread of Pitch Black, right down to the fantastically weird beasts and the use of dark lighting and rain to build up atmosphere. There’s even a tough, gun-toting female to kick butt too: “Dahl”, played by Battlestar Galactica’s Starbuck (Sackhoff).

But the best bits of Riddick are before the stereotypical bounty hunters descend: almost half an hour of screen time devoted just to him alone on a foreign planet. Stalking through the sandy wasteland, he grapples and outwits cave-dwelling creatures with nothing but a bone and a space dog. That extra-terrestrial tail-wagger gives Vin Diesel a new side that complements his swaggering amorality; an unspoken partnership of trust and respect between two lone survivors.

When Vin Diesel is given humans to interact with, though, his sociopath becomes far less engaging. Why? In a word: Dahl. Halfway through, the movie decides to focus on the final syllable of Richard B. Riddick’s name. “I’m gonna go balls deep into you,” he tells her, while chained to a chair. “But only because you ask me to, sweet like.”

It’s not the first time she is threatened sexually in the movie; the hideously unlikeable Santana (Mollà) assaults her several times in the first half of the movie, only for her to kick his bearded ass. “I don’t fuck guys,” she responds. “I fuck them up.”

The message is clear: 1. Dahl is a lesbian. 2. Santana is not a nice man because he tries to rape her. Riddick, on the other hand, doesn’t. He’s a killer, but he’s asexual; that final syllable doesn’t occur to him. The boundaries between (anti-)hero and villain are clearly drawn.

So for Twohy to later contradict that is confusing and highly uncomfortable. The survival-driven otherness that made Riddick such a fascinating beast has gone; one man and his space dog becomes closer to a one creep in a nightclub and a spiked drink. That’s an anti-hero no one can root for, even if you really like his goggles. Moreover, by hinting at a possible relationship between the two, the script even goes to the misogynistic extent of suggesting Riddick’s threat of rape is just the thing the gay girl needs.

When the climax arrives in all its nifty CGI glory, the showdown is visually cracking, full of slow-mo and impressive close-up stunts. Here, the director is doing what he does well: building a world that feels vast, despite a tiny wallet. It’s the kind of thing that suggests Riddick would make a decent mini-TV series with a different critter each week. But after that messed-up middle-act decision, it’s hard to care about any of it. Riddick has gone from being the most intriguing person on screen to the most despicable.

And yet the “balls deep” comment is a throwaway line that has no huge impact on the actual plot. Why include it, then? To excite the fans? If that’s the case, it’s crude and dubious. If that isn’t the case and it’s simply a misplaced attempt at blokey sci-fi banter, it’s bad writing. Either way, it spoils what is otherwise a satisfying piece of B-movie action. Without it, this Pitch Black-lite ain’t nothing new, but at least it’s entertaining. Riddick’s rapey side, though, is something very new – and leaves you wanting to cross him off the list altogether.

Riddick is available on Netflix UK, as part of an £8.99 monthly subscription.

Where can I buy or rent or rent Riddick online in the UK? 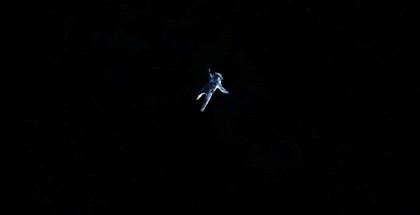