Netflix UK film review: Molly Moon and the Incredible Book of Hypnotism | Where to watch online in UK | How to stream legally | VODzilla.co 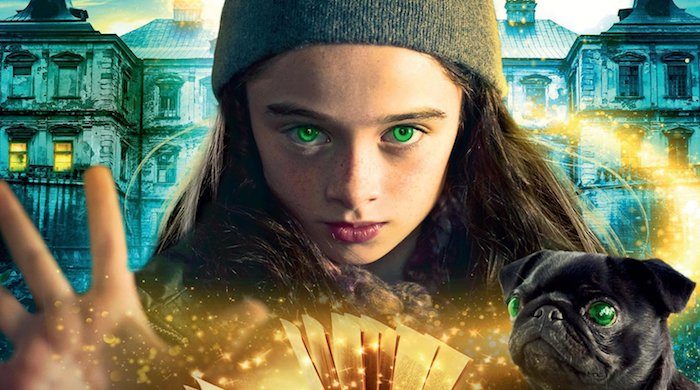 Suitability for anyone over the age of 10

From the jagged yellow lettering used on posters and DVDs, it’s not hard to see which movie franchise Molly Moon’s producers are hoping to emulate. They don’t even come close – where the Potter movies are bursting at the seams with magical whimsy and exciting adventure, Molly Moon is more interested in TV talent shows and clothes shopping.

Based on the novel by Georgia Byng, the by-the-numbers plot sees adorable orphan Molly (Raffey Cassidy) living in a quasi-Victorian children’s home, ruled by the monstrous Miss Adderstone (Lesley Manville) and populated predominantly by bullies. Molly’s allies come in the form of her day-worker, Miss Trinklebury (Emily Watson), and her best friend, Rocky (Jadon Carnelly-Morris). When she comes across a magical book on hypnosis, Molly is bequeathed mind-control powers and uses them first to improve life at the orphanage, before hot-footing it to London, where she supplants teen pop star Davina (Tallulah Evans) and becomes world famous, despite the fact she has no discernible talent.

Yes, there’s a moral lesson, and the film can shout “It wasn’t the hypnosis that made you special” as many times as it wants, but there’s no escaping the fact that Molly is just an average girl. It doesn’t help, of course, that the movie is so boring. Cliché is piled upon cliché, together with turgid dialogue and arse-clenchingly awful song-and-dance set pieces.

Its only redeeming feature is its cast, which features a vast array of the UK’s finest actors; as well as Watson and Manville, we’re treated to Anne-Marie Duff, Dominic Monaghan, Ben Miller, Omid Djalili and Celia Imrie, all doing their best with shoddy material. Joan Collins, though, who appears briefly as the villain, is so unbearably bad that it’ll make your teeth itch.

The young stars equip themselves well. Lead Raffey Cassidy has already proved herself in Tomorrowland, Snow White and the Huntsman and Dark Shadows, and one can only hope she puts Molly Moon behind her and moves swiftly onto a project more befitting her talent. The same goes for Tallulah Evans, who manages to make her one-dimensional pop star one of the most well-rounded and convincing characters in the film, although that’s not saying much.

Molly Moon and the Incredible Book of Hypnotism is available on Netflix UK, as part of an £9.99 monthly subscription.

Where can I buy or rent Molly Moon and the Incredible Book of Hypnotism online in the UK?

Catch up TV review: Life on the Psych Ward, House of the Year, MPs Behind Closed Doors