VOD film review: Marry Me | Where to watch online in UK | How to stream legally | When it is available on digital | VODzilla.co 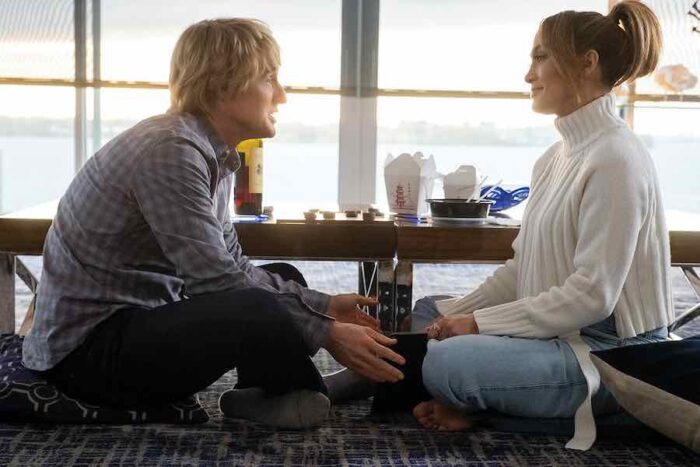 Jennifer Lopez and Owen Wilson are absolutely charming in this sweet, funny and catchy music rom-com.

When J-Lo decided to pursue an acting career in the early 90s some may have rolled their eyes at another popstar attempting the crossover. However nearly 30 years on and she has turned in multiple iconic performances, including a sexy federal agent in Steven Soderbergh’s Out of Sight and more recently her unforgettable should’ve-been-Oscar-nominated turn as a stripper with moxie in Lorene Scafaria’s Hustlers. The lows have been pretty insufferable with Gigli causing the critics to proclaim that Lopez and her beau Ben Affleck simply had no chemistry… but things have a way of working out in the end.

In this loose adaption of Bobby Crosby’s graphic novel, Lopez takes to the stage as Kat, a superstar with the world at her feet, but a complicated love life that plays out in the public eye. Much to her dismay, she is left at the altar at a massive stadium concert wedding with a cheating partner in the wings, so she makes a snap decision to marry a stranger in the crowd. Owen Wilson plays the unwitting but willing Charlie – a maths teacher and single dad who is at the gig with his daughter and friend, Parker (Sarah Silverman). That’s the simple set up and the film follows the couple as they navigate romance and business in the digital age.

The pairing of Lopez and Wilson is absolutely charming, as their characters teach each other valuable lessons about companionship. For the most part the screenplay leans on the sweeter side in the depiction of their romance, but there are unexpected LOLs. J-Lo even gets one of the silliest slapstick moments in the film in between her belting out ballads and earworms – the title track will be stuck in your head for days.

Most of the comic relief comes from the great cast of supporting actors and comedians. Silverman’s sharp tongue works well alongside Owen’s sincerity, Michelle Buteau is hilarious as part of Kat’s entourage and British actor John Bradley continues making a name for himself as an endearing weirdo after his memorable turn in Moonfall.

The soundtrack and most of the film is a joyful platform for the singers to showcase their talent. Latin pop singer Maluma gets a couple of bangerz but the highlight of the entire film is J-Lo’s rendition of Church – a provocative Madonna-meets-Gaga number where nuns writhe sexily on stage worshipping at the altar of Lopez’s talent and beauty. Director Kat Coiro does wonders in the concert moments, making you feel like you’re in the room. It’s a spiritual experience and one that will have you dancing round the living room with your pals.

Trailer: Kenneth Branagh is Boris Johnson in Sky’s This England

The League of Extraordinary Gentlemen reboot in the works at Hulu