VOD film review: I Am Legend | Where to watch online in UK | How to stream legally | When it is available on digital | VODzilla.co

VOD film review: I Am Legend 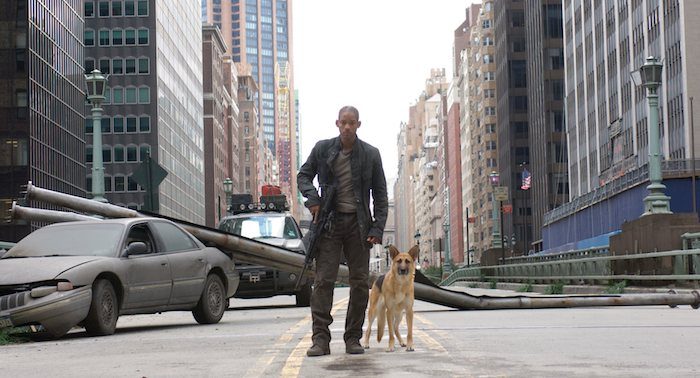 Lush, green grass sprouts through cracked paving stones. Animals run free through the streets. The sun climbs through the picturesque sky, as Robert Neville (Smith) wanders around the peaceful city with his canine companion. But something’s rotten in Manhattan. Something that only comes out when it’s dark. Something deformed, carnivorous and computer generated. That’s right: we have another zombie movie.

This time, the dystopian town doesn’t look too bad: no pollution or congestion, a healthy smattering of wildlife to feed upon, even an iPod that plays Bob Marley. But there are no humans either. Well, apart from Robert. Years ago, Dr Alice Krippin (Emma Thompson) thought she had found a cure for cancer. Once the drug had circulated the population, things went awry, killing off most of the human race and turning the rest into zombies. Trust the Brits to do it. Now it’s up to Robert – immune to the disease – to find a cure for humanity and rid the world of the plague.

Until we see the monsters, I Am Legend borders on poetic, allowing Smith to mingle with mannequins in ways usually only seen behind closed doors. Anthropomorphising his dog to endearing extremes, he talks to himself, afraid to look reality in the face outside of the lab – amid some of his more dubious choices over the years, the charismatic Smith once again shows he can act with a maturity that is impressively sincere.

When the night-dwellers stray into sight, the tension escalates. Then, it falls rapidly as the contrived conclusion arrives. Rushing a disappointing final act, Lawrence loses touch with an interesting and exciting concept; opting for a sombre voice-over that weighs down the earlier excitement, the leap from psychological thriller to sickly sentiment is sad to witness. Despite that flawed second half, there’s much to like about the gripping opening, but with monsters that look more dopey than dangerous, this never quite earns the “legend” of its title.

I Am Legend is available to watch online on Amazon Prime Video as part of a Prime membership or a £5.99 monthly subscription.

Where can I buy or rent I Am Legend online in the UK?