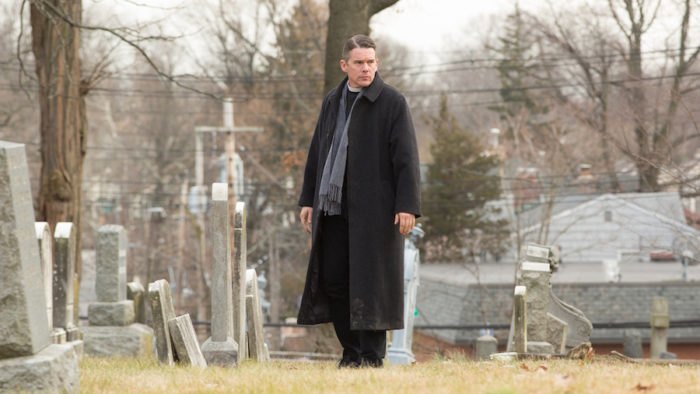 Ethan Hawke is an actor who’s so good it’s easy to forget it – whether it’s Before Sunrise or Good Kill, he’s a remarkably sincere screen presence. So what a pleasure it is to see him given a role that makes the most of his genuine charisma, framing him against a sparse background that only highlights his earnest intensity. And intensity is certainly the word: Paul Schrader’s First Reformed emerges as a bleak, bold and bravely provocative drama with an apocalyptic streak that feels all too apt.

Hawke is Ernst Toller, a priest with an intimidating conviction about his vocation: when he isn’t preaching at the pulpit, he’s writing stern words in his diary, directed firmly at himself. But there’s something rotten underneath that holy surface; his son is dead, after a tour in Iraq, his wife has departed, and he’s now left shouldering the guilt for all of it. No wonder that Reverend Joel Jeffers (Cedric Kyles, aka. Cedric the Entertainer), who is tasked with overseeing Toller, is concerned about his shepherd’s ability to tend to his flock.

His flock, tellingly, is tiny, and his titular church in New York is more tourist attraction than active parish. But one of his sheep, Mary (Amanda Seyfried), nonetheless approaches him for pastoral care, asking him to talk to Michael (Philip Ettinger), her husband. He’s depressed after a life of campaigning for the environment in an age where civilisation has failed to care for the planet. With Mary pregnant, is it right for them to bring a child into this spoiled world?

Michael’s outrage ultimately sparks Toller’s own militant rigour, and his own self-despair begins to turn outward, towards his superficial diocese, towards the fact that his church is sponsored by a giant oil company. His descent into righteous anger fuels a voiceover that becomes spikier and more disparaging the more the film goes on, and Hawke spits, stares and recites with an incandescence that is at once unsettling and understated – a blinding figure in front of an almost monochrome backdrop of white and shade.

Schrader, meanwhile, finds his form for the first time in years, latching on to that fire and fury to drive up the suspense and despondence over 115 taut minutes; his camera sticks to Hawke with scorching close-ups and ferocious intimacy, painting an honest and harrowing character study about a man trying to find redemption in a pit of doubt. Taking the inner turmoil of Taxi Driver’s Travis Bickle and aiming it at an issue that’s grimly relevant, this is a blistering howl of angst and fear – a barbed, austere cry for forgiveness on behalf of a whole world, a horrifying portrait of ecological disaster, and a challenging glimpse of compassion that leaves a dark question hanging in the air; in a time of crisis and guilt, where faith has deserted the faithful, whose arms can we lean on?

First Reformed is available on Netflix UK, as part of an £8.99 monthly subscription.

Where can I buy or rent First Reformed online in the UK? 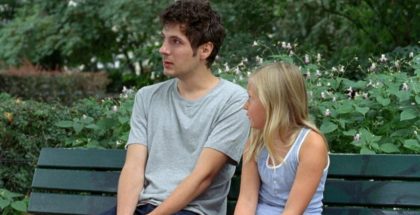