UK web series review: Flight 462 (Fear the Walking Dead) | Where to watch online in UK | How to stream legally | When it is available on digital | VODzilla.co 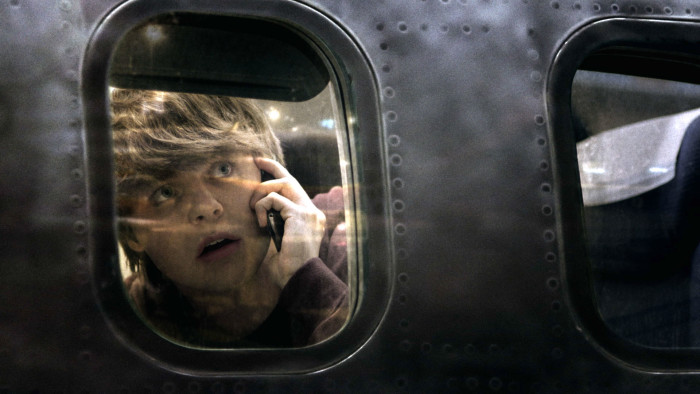 “Lights are going out everywhere…”

Fear The Walking Dead returns to UK TV on Monday 11th April, hot on the heels of The Walking Dead Season 6 finale. AMC’s prequel premiered on its own TV channel – available exclusively on BT TV – but Season 1 is now available on Amazon Prime Video, as well as through BT TV’s on-demand section, which means that it’s the perfect time for fans to catch up. For those who have already seen Season 1, another TV series has also landed on British scenes for the first time: Flight 462, a web series that links Season 1 and Season 2 together.

The show was originally designed to air in the advert breaks during The Walking Dead’s US broadcast, with 16 one-minute chapters building up to the release of Fear The Walking Dead Season 2. In the UK, though, with AMC’s zombie hit on FOX and its prequel on BT, the web series didn’t see the light of day. BT TV is currently releasing the show on its Facebook page every day – but AMC has already published the whole thing on its UK website, which means you can binge-view the series in quarter of an hour – all in all, a far more rewarding experience.

Writers Lauren Signorino and Michael Zunic take their time to sow the seeds of dread – despite the fact that it’s pretty obvious that zombies will feature at some point. We see Jake on the phone to his mum, giving him a back-story we can emotionally engage with, while we also catch wind of other flights being grounded for unknown reasons, via another passenger with a mobile phone. It’s a neat demonstration of how smartly the series has to build up tension: given the constraints of its rapid running time, the programme has to use genre tropes as shorthand to fill in the background, so that they can focus on advancing the story. Rather than a lengthy, predictable conversation, a cough from sickly traveller Marcus (Brett Rickaby) is all we need to realise that he’s going to be patient zero.

The problem with that abridged approach is that it can leave some characters feeling more sketched in than others. Charlie (Michelle Ang), for example, already seems to know what’s up the minute she steps on the plane – in no time at all, she’s closed the shutter by Jake’s window, explained to an air marshal that you have to kill zombies in the head and demonstrated she’s cool in a crisis.

The web series was also created with the intention of introducing a new character who would feature in Season 2 – and you immediately hope, for the sake of humanity, if nothing else, that Charlie will be it. But she flits being impressively bad-ass and unbelievably well-informed, seeing as Fear The Walking Dead is all about chronicling the outbreak of the disease for the first time and society’s unprepared response to it. Ang, though, plays her with enough conviction to convince that Charlie’s got history to back up her behaviour – her hurried glance out of the plane before it takes off suggests that she’s running away from something.

If you can buy into both Charlie and the overall promotional nature of the web series, there’s a lot to enjoy in Flight 462. The zombie effects are effective (Rickaby does a good dead face) and the gore is more than gory enough to disturb. It helps that the whole thing is set on the plane too; like Liam Neeson’s Non-Stop, there’s something undeniably unsettling about airplanes and airports and that underlying nervousness modern passengers have about air travel feeds into the overall suspense. Those closed quarters also mean that it’s far more plausible for an outbreak to occur and force the survivors to be enjoyably inventive in their weapons of choice from the banned hand luggage items – you’ll never make fun of crochet again.

What doesn’t quite work are other members of the passengers and crew, who mostly fade into the background without making a noise – even as a dead man savagely bites a woman’s neck at the end of the aisle. In real life, the cabin would be in uproar and panic, the kind of frenzied claustrophobia that could have worked wonders for a zombie story. Fortunately, the ultra-short length of each instalment will keep enough viewers entertained enough not to worry about the rest of the flight. When poor air hostess Deirdre tells us the lights are going out everywhere, meanwhile, our field of vision is so narrow that it’s easy to believe that the epidemic really is sweeping the ground below us.

The end result is an innovative concept that, for the most part, is well executed. If it all winds up feeling slightly anticlimactic, director Michael McDonough (DoP on Fear’s first season) ensures that the visuals remain consistent enough that this does feel like part of the same universe as the full show – a vital component in this successfully leading up to Season 2. As a standalone series, Flight 462’s not perfect, but as a teaser for the series’ return, it’s a clever way to expand the world without blowing the budget – and an excellent calling card for McDonough, who juggles all of the restrictions and requirements placed upon the series to deliver some genuine moments of horror.

Before Season 2 of Fear The Walking Dead lands, watch the whole of Flight 462 below. (Note: This required Flash. To see them on a smartphone or tablet, click here.)

Not got BT TV? Find out how to watch Fear The Walking Dead in the UK.