UK TV review: The Living and the Dead (spoilers) | VODzilla.co | Where to watch online in UK

UK TV review: The Living and the Dead (spoilers)

Warning: This contains spoilers for the end of The Living and the Dead. For a spoiler-free review of the show, click here.

“You mistook me for a ghost… of my former self.” That’s Nathan Appleby in the final episode of The Living and the Dead – a finale that sees former and future selves collide to superb, shocking effect.

Ashley Pharaoh’s spooky series has steeped itself in history from its opening episode, as Colin Morgan’s pioneering psychologist and his wife, Charlotte (Charlotte Spencer), inherited their rural farm. With it came customs, traditions, rituals and superstitions – things passed down through generations within the tiny community, like ghost stories told around a campfire.

The contrast couldn’t be more striking. While our duo put on a Victorian show for the locals, behind closed doors, they’ve been like a modern couple, flirting, joking, sharing authority. Charlotte’s forward-thinking with their mechanical plough placed her not only at odds with the farmhands, but with the area’s heritage – it was no wonder that the hauntings that plagued the pair stemmed from nature: plagues of insects; children killed in the detonation of the art to make way for a tramline.

“They say you’re raising the dead,” says schoolteacher Martha (Utopia’s wonderfully eerie Fiona O’Shaughnessy) in Episode 4, which fuses the blend of supernatural and natural world with a sexual tension – and, at the same time, ties the slow descent of sleepy Shepzoy into darkness inexorably to Nathan’s own spiritual decline.

“That way madness lies,” warns the parish priest, as Nathan’s determination to find answers about his dead son in the afterlife raise cautions of him transgressing against god and (there’s the word again) nature. Spiritualism, Nicholas Woodeson’s wonderfully gravelly man of the cloth correctly observes, is more often than not a symptom of personal bereavement.

Nathan’s transformation is ingrained in the show’s very fabric: where Alice Troughton’s subtle direction of the opening three parts highlighted the horror of death even in the golden daylight of England’s green and pleasant land, Samuel Donovan’s direction of the final three chapters literally takes us into the shadows, as everything gets dimmer. Night draws in, clouds fill the sky, and the seasons cycle from spring through to winter.

Colin Morgan gets better with every episode, throwing himself into his character’s deteriorating health. By the time we reach the finale, he’s gone from troubled and uncertain to downright unbalanced – his giggling delivery of taunts to his wife about her wanting to run off with next door neighbour William Payne (David Oakes, whose clean-shaven smile couldn’t be more different to Morgan’s dishevelled, bearded face) are really quite unnerving. He’s almost unrecognisable from the man he was at the start – startling proof of just how versatile an actor Morgan is.

Spencer remains fantastic as his spouse, standing up to Nathan and telling him he’s going crazy, resisting his cruel insults and, when that red-coated spirit finally appears to her to warn her of Nathan’s suicidal intent, turning out to be the one person who can stop him. It’s testament to their chemistry that we buy into that bond, even after they’ve just had a bitter row (shot, effectively, in almost total silhouette).

“There’s just you and me. And we’re alive, Nathan Appleby,” she tells him.

But that’s not true, of course. There’s that mysterious woman who keeps popping up in the background. It’s a masterstroke that Episode 6 begins with the explicit reveal of her identity, not as a scary spectre in the 1800s, but as a normal person in the 21st century. Lara, for that is her name, turns out to be Nathan’s great-great-granddaughter, a troubled mother (to a baby, Lottie – short for Charlotte?), who is in an institute to help her through her visions of – you guessed it – Nathan and co.

It’s typical of the Life on Mars creator to turn the idea of ghosts into a time-travelling conundrum, but just like his cop show, he finds an elegant, poetic way to combine the two; if the past can haunt the present, what are ghosts, other than fragments of memories and history out of time? In which case, why can’t the present haunt the past too? Lara’s mother (and other ancestors) have had their own cases of madness, we discover, a trait that echoes all the way back to Nathan (and the eternally creepy Gabriel), but also means that he can see her too.

“I’m not trying to haunt you,” she declares. “I just want to get on with my life.”

Chloe Pirrie, who impressed in indie drama Shell several years ago, is remarkable as Lara, managing to be both tragic, intimidating and terrified, mostly while acting by herself on screen. She takes us on a solo tour through the abandoned Appleby house (props, once again, to the set designers for picking an old building that they could renovate and use in both new and old incarnations), delivering just as much tension as in earlier episodes, despite the fact that we already know the ghouls waiting around every corner (Harriet makes a brief, bloody appearance).

Lara’s iPad that contains photos of the Applebys and other historical documents is no less significant than when it was a mysterious “book of light” seen by Nathan – it’s yet another way in which the show manages to ground its paranormal activity in something mundane and believable. That approach helps us to make the leap required for the show’s final flourish: the fatal car crash that Lara has upon driving away from the house, the wreckage appearing, centuries earlier, in the marshy farmland on the outskirts of the estate. It’s a moment that almost defies belief, were it not for the layers of emotion that have been built up around it, from the sad departure of Lara to the healed relationship of Nathan and Charlotte and the reunion of Gabriel with a parental figure.

“You’re my mummy now,” Gabriel says to Lara, who appears to join him in the afterlife. (The phrase “daddy’s coming”, perhaps, wasn’t a reference to Nathan, but to Lottie’s daddy, who we hear rescues her from the wreckage.)

The best horror always manages to marry scares and sentiment and The Living and the Dead isn’t afraid to follow convention in that regard, crafting a satisfying conclusion to an original, spooky story. But Pharaoh has always been a master of gripping, surprising television and, sure enough, there’s a sting in the tail, as Nathan finds himself awoken from his peaceful slumber next to Charlotte to discover a group of modern-day partygoers in his living room. They are, it emerges, holding a seance. “Why did you kill your wife?” they ask him – a revelation that leaves your brain spinning. Which, you imagine, isn’t unlike how Nathan must feel. Presuming they’re referring to the eventual murder of Charlotte, it’s a question from the future that torments the past; he will one day become a ghost of his former self. And it’s already haunting him.

Episodes 2 to 6 of The Living and the Dead are available on BBC iPlayer. 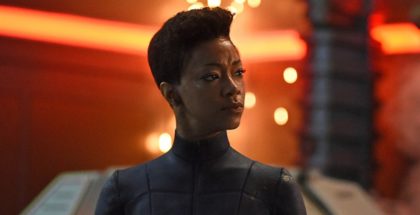