UK TV review: The Handmaid's Tale: Season 2, Episode 11 (spoilers) | Where to watch online in UK | How to stream legally | When it is available on digital | VODzilla.co

Elisabeth Moss deserves all the awards for this gruelling, moving one-woman show.

Warning: This contains spoilers for Episode 11 of The Handmaid’s Tale Season 2. Catch up with our weekly reviews of previous episodes here. Not seen Season 1? Click here to see where you can watch it online.

Elisabeth Moss deserves all the Emmy awards in the world. If you were ever in doubt of that, this episode of The Handmaid’s Tale seems designed specifically to prove it.

The arduous hour ditches most of Gilead and its supporting cast, instead making June the sole star, and Moss carries the 60-minute ordeal single-handed with grit, heart and some serious lung power.

“I’m sorry there’s so much pain in this story,” she tells us early on, and it’s a comment that feels more like the writers offering their own mea culpa for the brutality put on screen in this series’ second run. After all, if you thought last episode – which saw the pregnant mother-of-one separated from her first daughter again and horribly raped by her captors – was intense, this chapter doesn’t let up. We rejoin events after Nick has been taken away from the empty house where June met her daughter, and, left alone, she begins to hunt for a way to escape for good.

Someone ransacking a vacant building in the snow might not sound like riveting television, but it’s absolutely jam-packed with tension, as June desperately tries to locate the keys for the car in the garage. Halfway through her hunt, Commander Waterford and Serena turn up, screaming out for her – and then at each other – while she quietly strains to move through the building and avoid their sweeping surveillance. It’s like watching a wintery remake of The Keeping Room, or a strange spin-off from A Quiet Place, with time at once both suspended outside of Gilead’s strict routine and yet more precious and urgent than ever.

Once the keys are found, there’s the challenge of sourcing supplies, the hassle of getting in the car, and the impossible obstacle of opening the frozen garage doors. When Serena tells Fred that she gave up everything for him to have a child, meanwhile, June is nearby, unseen, debating whether to shoot them and end this once and for all. She doesn’t – Fear? Moral conflict? Sympathy for Serena? – but when they’re gone and she goes outside, a wolf turns up, just to make it clear that the peril is still Very Perilous.

It’s not easy for a TV show to drop in a token ominous wolf without the substance to back it up, and The Handmaid’s Tale succeeds in that regard: away from what sometimes feels like indulging in Gilead’s mistreatment of its characters, the only enemy here is the universe itself, and that is perfectly contrasted with June’s memories of the miracle of her first birth. Flashbacks to her pregnancy, and her relationship with Hannah, offer a real sense of hope, connection and intimacy, and that’s reinforced twice over with the arrival of her second daughter.

Her impending labour is the ticking clock that looms over the whole episode, even more so than the threat of possible detection. When her waters break, we’re under no illusion that this is going to be a gruelling birth, with no support, no medical care, and not even a bed or an electric lamp. She passes out mid-labour, only to wake up covered in blood and a baby still to push out – and push out she does, bellowing in agony and determination. It’s at once a climax and a catharsis, after weeks of suffering at the hands of Gilead, a climax of pain but a catharsis of hope and, in its own way, freedom: the birth of June’s baby may happen on Gilead soil, but it happens away from the insidious ceremonies of Aunt Lydia and the possessive control of Serena. Crucially, June (who has long since reclaimed her name from Ofred) gets to name her child herself: Holly, after her mother, whom we meet in the flashbacks beforehand.

“Hi,” she says to Holly, with a smile and tears that, perhaps for the first time, offer a genuine sense of happiness in The Handmaid’s Tale. “I keep on going with this limping, mutilated story, because I want you to hear it,” her voice continues near the episode’s end – and we learn she’s not talking to us, but to her daughter, a device that may not assuage concerns from previous episodes, but certainly roots the series’ future direction in this little human bundle. Indeed, with two episodes still to go, there’s a real feeling of open possibilities come the end credits, even as a car pulls up outside the house: could it be friend or foe? Either way, the radio in the house notes that Britain has imposed sanctions upon Gilead, while tensions are brewing across the border in Canada. With Serena turning on her husband in a way we’ve never seen before, there’s a sense of a very real mutiny on the cards ahead of the season finale. After this impressive hour of TV, there’s no doubting June can handle it.

The Handmaid’s Tale: Season 1 to 3 is available to watch online on Amazon Prime Video as part of a Prime membership or a £5.99 monthly subscription. It is also available on All 4. 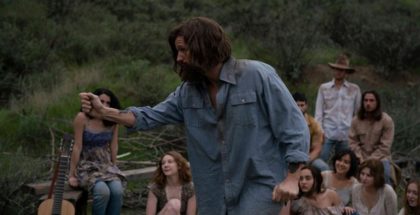