UK TV review: Strike: The Silkworm | VODzilla.co | Where to watch online in UK

“Offer them a biscuit. That always makes people feel special.” That’s the kind of wisdom you can expect from Cormoran Strike (Tom Burke). Some detectives will give you musings on the wretched nature of humanity. Others will have a wry sense of humour. Others will wax lyrical with their lightning deductions and superhuman leaps of logic. Not Cormoran Strike. He does biscuits. Specifically, biscuits to keep clients distracted when he’s running late for an appointment.

It’s that deliberately unimpressive quality that makes Strike so, well, impressive – and in this second outing for the BBC’s take on JK Rowling’s detective, the characterisation of our hero just keeps getting better. Gruff, rough and giving very little poops about anything, he’s an enjoyably antisocial figure. Every now and then, though, a little humanity shines through, and The Silkworm shows a light on it straight away, as Cormoran happily tells a wealthy would-be client to keep waiting (biscuits or no biscuit) so he can focus his attention on a troubled woman, whose husband has gone missing.

She has no money to speak of, but that’s because he doesn’t either – a once-successful author, Owen Quine is now a washed-up, second-rate writer, whose only real reason to be thought of is that he’s just unveiled the manuscript for his new book, Bombyx Mori, a story of debauchery, sadomasochism, cannibalism and other depraved acts. Underneath that nasty surface, though, lies a badly disguised series of attacks and libellous portrayals of other famous writers and rivals. It’s perhaps no surprise, then, that when he turns up dead, it’s in the form of a grisly reenactment of his own ugly book.

If it sounds like juicy territory for Rowling to venture into, you’d be right, and there’s great fun to be had in seeing her bring the literary world to life, complete with its politics and insults. The cast, including Tim McInnerny as his publisher, Daniel Chard, Dominic Mafham as his boozy editor Jerry, and Peter Sullivan as snobby rival Andrew Fancourt, are all having a whale of a time, from quiet confessions in private to schmoozing repartee at rooftop soirees.

There’s tragedy to counter the snark, as we open with a sequence featuring another writer (the wife of Andrew), who commits suicide – a sequence that’s shocking at best and tasteless at worst. The emotional through-line is continued by Monica Dolan, who is brilliant as Leonora, a loyal wife to Owen, in spite of his unfaithful ways. Sarah Gordy as his daughter, meanwhile, is heartbreakingly hit by the news of her father’s death. (Any show in which an actor can sell the line “I just want my Dodo” without us laughing is a very good one, indeed.)

The show does well to juggle those two tones, so well, in fact, that it can’t quite rescue the plot from Rowling’s book, which bends over backwards to become more convoluted than necessary, then wraps things up with a disappointingly conventional solution.

But as with The Cuckoo’s Calling, The Silkworm’s strength lies in just seeing our detecting duo go about their work. Holliday Grainger remains superb as Robin, who has graduated now from a temp PA to a full-time second slueth. She gets an increasing amount of screentime with each new chapter, both to bond with Burke’s Cormoran – the pair have excellent, effortless chemistry – and to rub the way wrong against Matthew, her bland, waste-of-space fiance (played with a smug streak by Kerr Logan). Naturally, Robin and her partner are engaged to get married in a matter of weeks. And naturally, we’re already rooting for Strike, in an enjoyably familiar will-they-won’t-they situation.

But it’s not all about that. Robin gets more to contribute to the plot, too, with the episode’s best sequence seeing her drive them both across a field quickly and confidently – much to Strike’s bewildered surprise. The result is a moving, funny, compelling two-part mystery that, not unlike ITV’s Maigret, sees the BBC’s new detective series take its time to find its feet. An anti-car chase, a spark central duo and some backstabbing famous people, all wrapped up with a stylish, noir credits sequence? The Silkworm sees Strike have his biscuit and eat it.

Strike: The Silkworm is available on BBC iPlayer until May 2021.

Where can I buy or rent Strike: The Silkworm online in the UK? 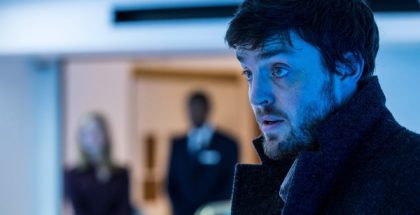