UK TV review: Mimi and the Mountain Dragon | Where to watch online in UK | How to stream legally | When it is available on digital | VODzilla.co

This beautifully scored and wonderfully illustrated adaptation is a rousing tale of a girl finding her voice.

From The Tiger Who Came to Tea to The Snail and the Whale, there’s no shortage of short films to dazzle the family this Christmas, but BBC One is unwrapping one more special offering: Mimi and the Mountain Dragon, based on the book by Michael Morpurgo and Helen Stephens.

The film whisks us away to a Swiss village where the locals live in dread of the Mountain Dragon. And so they bang their pots and pans and anything else they can get their hands on to ward it off every Christmas – a drumming ritual that leaves them quaking in more ways than one.

Enter Mimi, a shy girl who’s small for her age and quiet for her family. While others are banging drums, she’s whittling a flute – and so when she finds a baby dragon in their woodshed, she doesn’t reach for a loud object to scare it away, but takes a far more compassionate route.

What follows is a perilous journey of hopeful friendship, one that looks to change the way the villagers and the oh-so-terrible dragon think of each other for ever. If that sounds like How to Train Your Dragon, rest assured that Mimi and the Mountain Dragon is singing from an entirely different songbook.

From the moment the drums first strike up, the music takes an increasingly central role in the story. Composed by the Oscar-winning genius that is Rachel Portman, and performed with heart by the BBC Philharmonic Orchestra, it’s a swirling, moving, beautiful score, one that contrasts the gentle peace of Mimi’s flute with the staccato, rowdy percussion of everyone around her. Morpurgo introduces the story with a warming narration, but he soon hands the baton over to the soundtrack, and the result is a breathtaking piece of wordless storytelling that recalls Peter and the Wolf.

The visuals, based on original drawings by Emily Gravett, is delightfully old-fashioned, capturing so much emotion and rich depth with every etched-out frame. Combined with a simple narrative of courage and kindness, the result is a rousing portrait of one girl finding her voice in the face of an avalanche of fear and hatred – and a world that finally stops to listen.

Classic Doctor Who touches down on BritBox 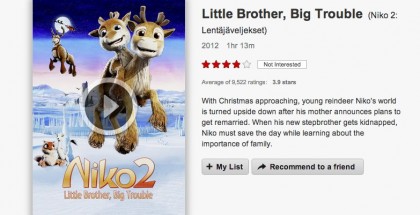